Every offseason, I eventually find myself digging through old boxes of baseball films that I've accumulated over the years.  Inspired by the film 61*, and the fact that I don't have any blogs posted for the 1961 Topps set, I decided to post one today. 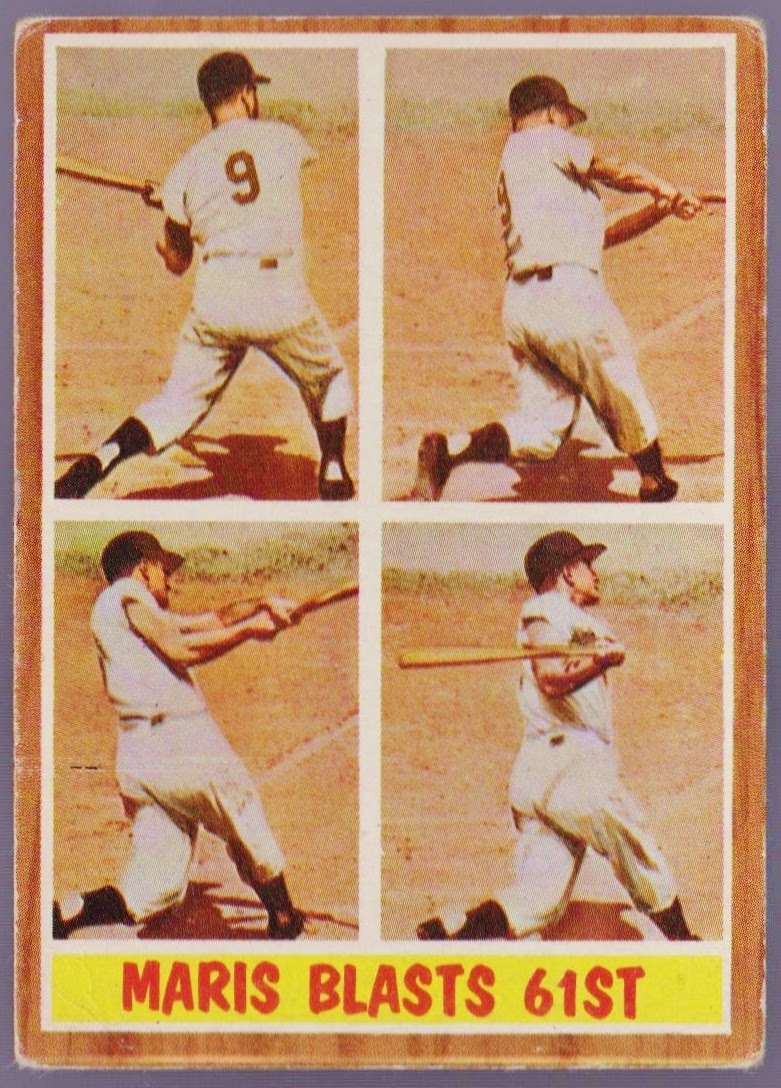 The following 3 players represent the typical Yankees Outfield of the early '60s.  Just about everybody is familiar with Mickey Mantle and Roger Maris, but most people like me that weren't around to watch baseball games in the '60s, probably aren't familiar with Hector Lopez.  He and Roger Maris were actually teammates together on the Kansas City Athletics in 1958-1959.  Lopez was traded to the Yankees first along with Ralph Terry in Spring of 1959.  Maris came along later during the offseason.  In 1959, Lopez split time in Leftfield with Norm Siebern before taking over completely in 1960.  Lopez pretty much held the Yankee Leftfield position until 1964, when he began to see a decrease in his playing time through 1966.  After being released by the Yankees, Lopez would finish out his playing career with the Washington Senators AAA ballclub in 1967-1968.

Maris held the Rightfield position for the Yankees upon arrival from 1960-1966 with the exception of 1965, which saw Hector Lopez primarily in Rightfield.  Just as Hector Lopez and Roger Maris had come to the Yankees during the same year, they also left during the same year after 1966.  Maris, however, was traded to the St. Louis Cardinals where he would finish out his playing career with 2 World Series appearances leading to 1 more championship.

Mickey Mantle requires little explanation.  He was the Yankees star Outfielder upon arrival to departure between 1951-1968.  The '61T card shown is from the 1996-1997 Mantle Commemorative Collection #11 of 36, which I have nearly completed (34 of 36).  Of all the Topps reprint sets ever made, this one probably has the greatest overall savings "value" due to the high cost of acquiring original Mantle cards.  The '61T Maris card shown is also a reprint from the 2002 Topps Archives set #4 of 200.  The only original '61T card shown is Hector Lopez #28.﻿
Posted by ToppsBawlyn87 at 12:35 PM No comments:

Email ThisBlogThis!Share to TwitterShare to FacebookShare to Pinterest
Labels: 1961, 1962

Excited about the opportunity to get more usage value out of my card sets, I'm presenting a couple more pages from one of my personal team favorites: the Seattle Mariners. 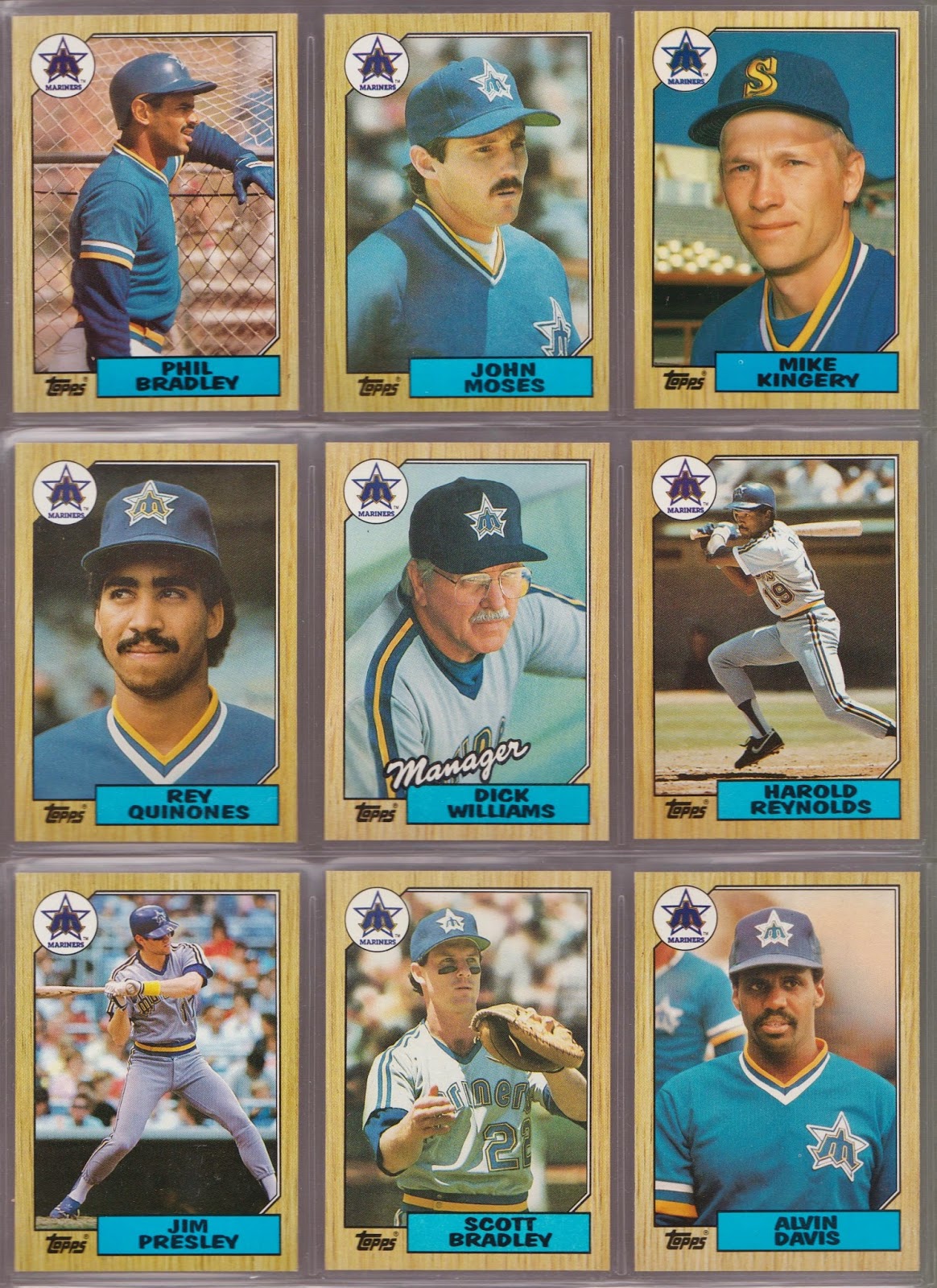 In this example, I made a switch from my last post by placing the manager card in the center of the position player page instead of the pitching ace.  Once again, the top 3 cards represent the Outfielders from left to right: Phil Bradley, John Moses, and Mike Kingery.  The bottom 5 cards around the edges represent the Infielders starting from the bottom-center and going counterclockwise: Scott Bradley, Alvin Davis, Harold Reynolds, Rey Quinones, and Jim Presley. 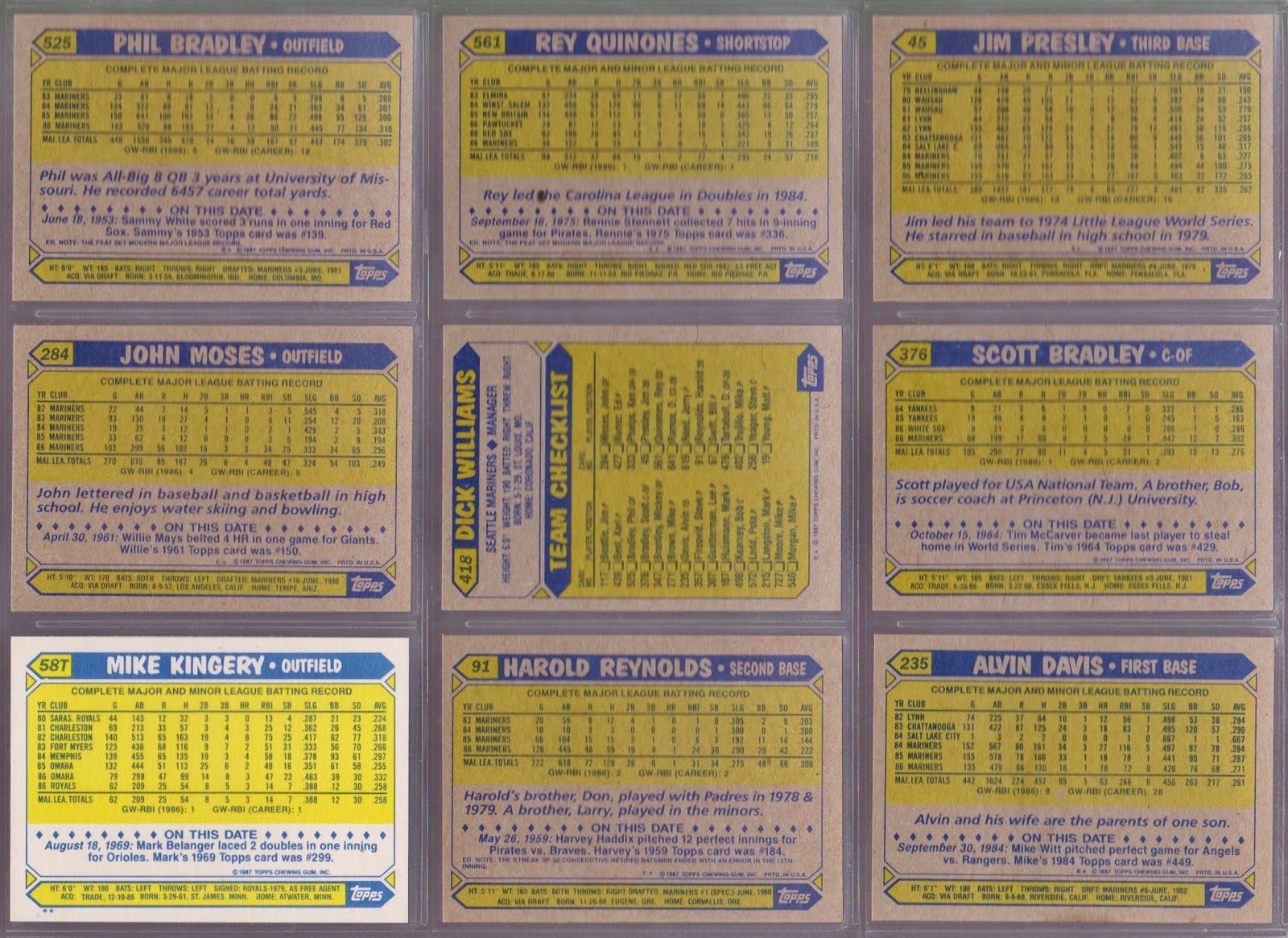 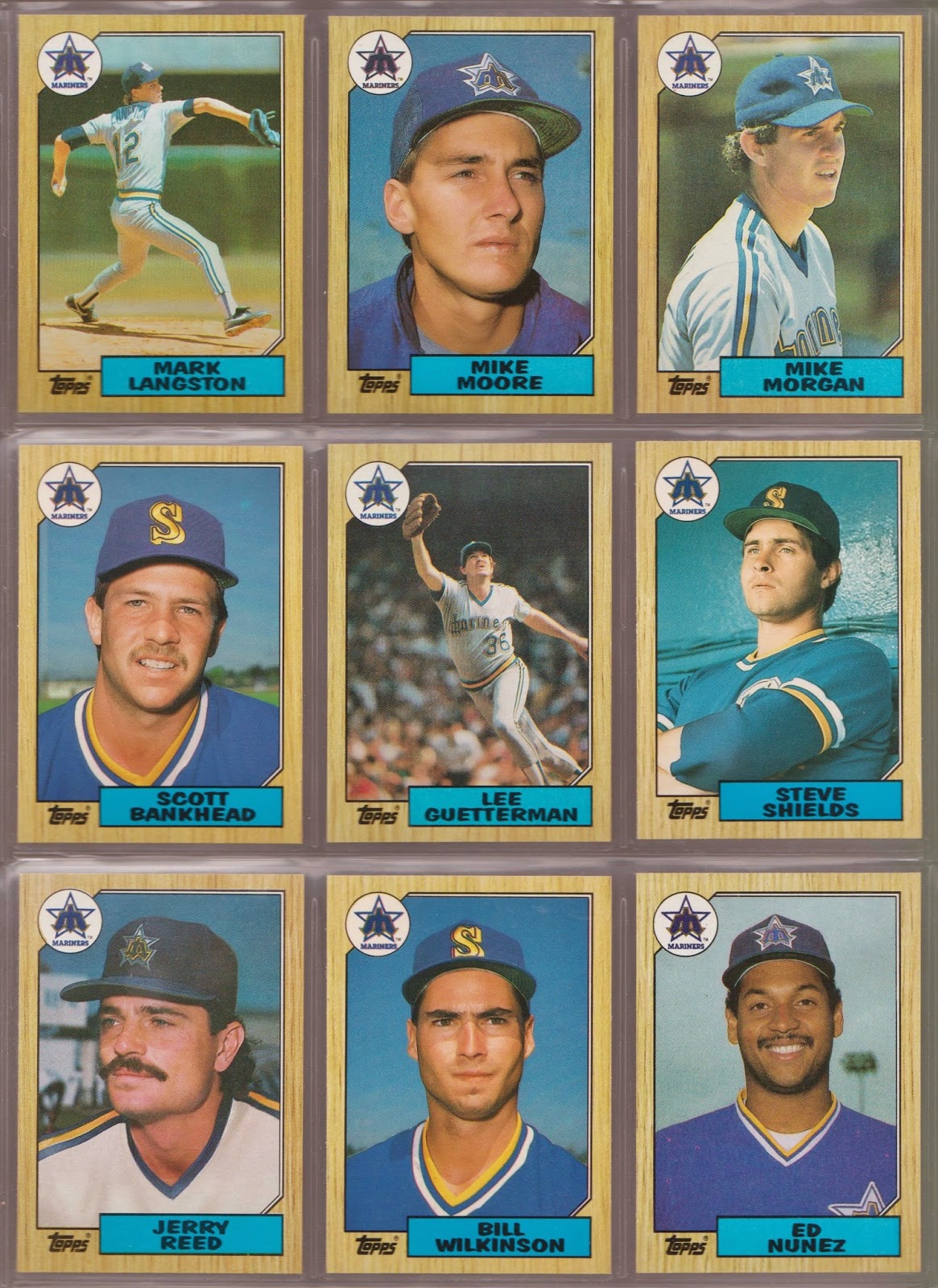 Implementing this organizational structure is still a work-in-progress for me.  Although I considered attempting something like this when first putting my cards into pages years ago, the question of what to do with the rest of the cards kept me from choosing this method.  For the AL teams, this format does not allow me to display the DH.  Back-up catchers and 4th Outfielders are not represented.  Not all team sets have manager cards.  There are a lot of considerations to address if I am going to continue reorganizing other sets.  Also, this method is more subjective than organizing each team from oldest to youngest player.  A player with the most innings in a position may have been replaced late season by someone who eventually became the team's everyday starter.  Selecting order of the starting rotation, middle relievers, and closers is even tougher--especially during the transitional eras of the past the only used 3-man or 4-man rotations. 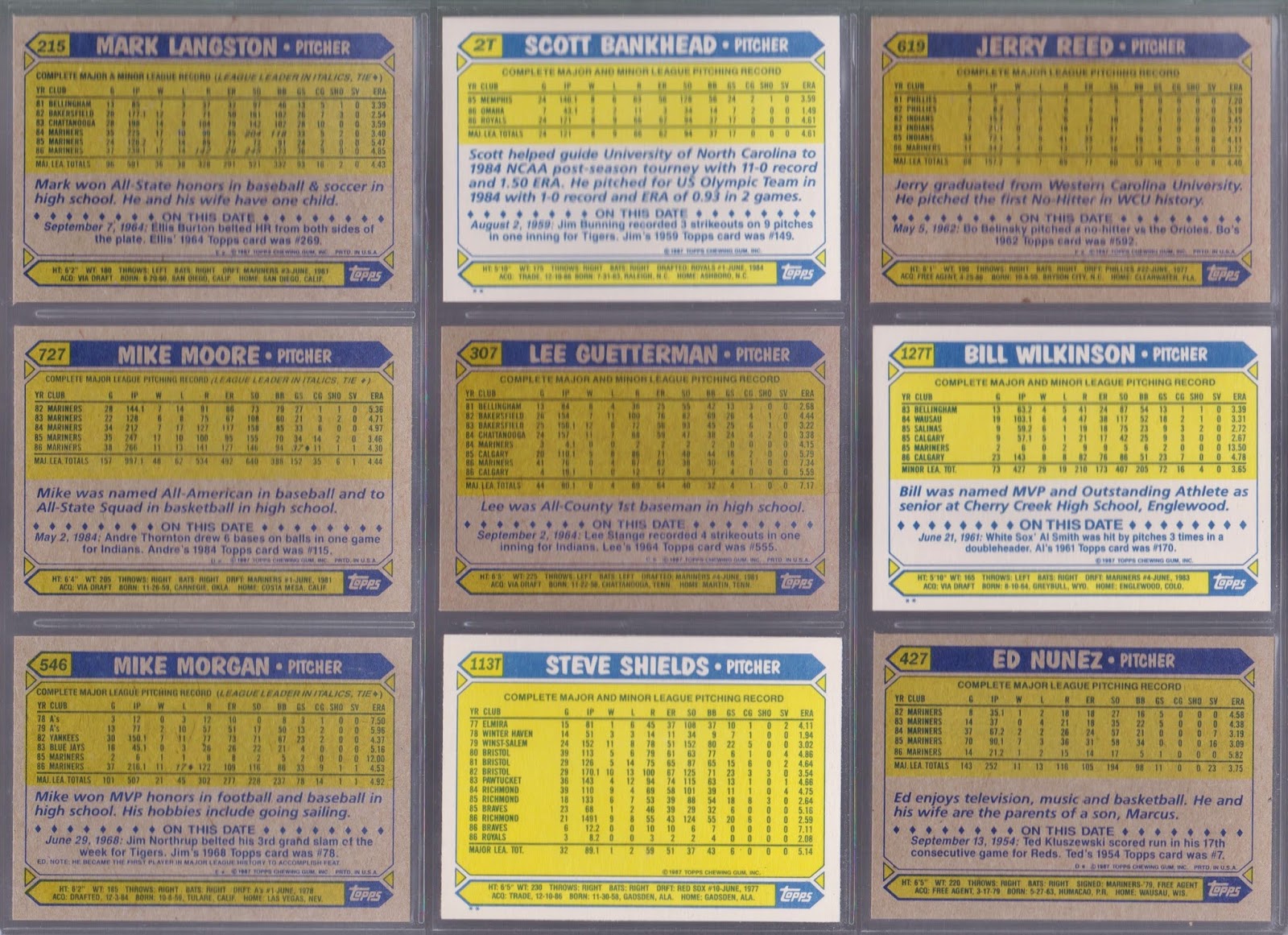 The main thing is to have fun with these sets.  A baseball card "collector" should not be organizing their complete sets in numerical order.

Posted by ToppsBawlyn87 at 9:21 AM No comments:

Email ThisBlogThis!Share to TwitterShare to FacebookShare to Pinterest
Labels: 1987

As an experiment, I recently reorganized my 1987 Topps set to represent each player's position on the field.  If you've been keeping up with this blog, you probably already know that up to this point, I've organized my entire collection by team performance and then players' age.  Lately, I've been wondering about how the playing field may have looked different eras or for teams that I didn't get to see much of, or at all. The first page of my experimental organization typically displays the player with the most innings for each position.  In this case, the Ace pitcher for the Twins in 1987 was HOF'er Bert Blyleven.  Just in front of the pitcher is starting Catcher, Tim Laudner.  To his right is First Baseman, Kent Hrbek.  Above that is Second Baseman, Steve Lombardozzi.  All the way to the Left is Shortstop, Greg Gagne.  On the bottom left is Third Baseman, Gary Gaetti.  On the top of the page are the three Outfielders, which from left to right are Danny Gladden, Kirby Puckett, and Tom Brunansky.  The 9-pocket pages resemble a baseball diamond almost perfectly.﻿ 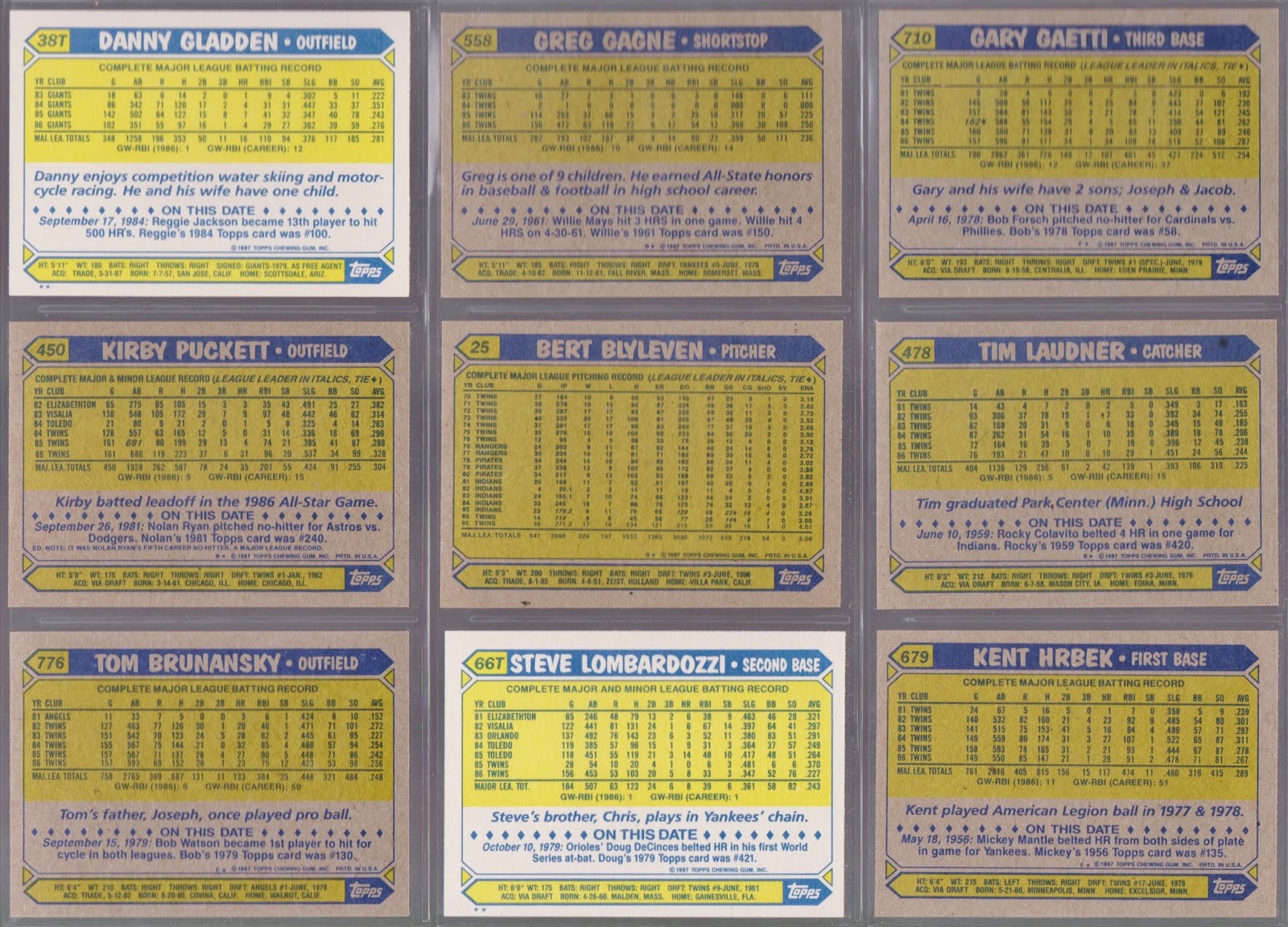 The next page features the manager and 8 other pitchers.  I originally had the starting rotation in the first 5 slots with the manager in the center of the first page, but then switched the manager and pitching Ace.  The second through fifth slots represent the second through fifth starters according to a combination of the their number of games started, innings pitched, and ERA.  In this case, the starting rotation was filled out with Frank Viola, Les Straker, Mike Smithson, and Joe Niekro.  The sixth slot is typically reserved for a pitcher that was involved in either a lot of games or innings with a relatively decent ERA.  In this case, that pitcher was Juan Berenguer.  The last three slots were reserved for late inning relievers in order by a combination of games finished and ERA.  The last slot is what I consider the team's closer.  In this case, the late inning relievers were George Frazier, Keith Atherton, and Jeff Reardon. 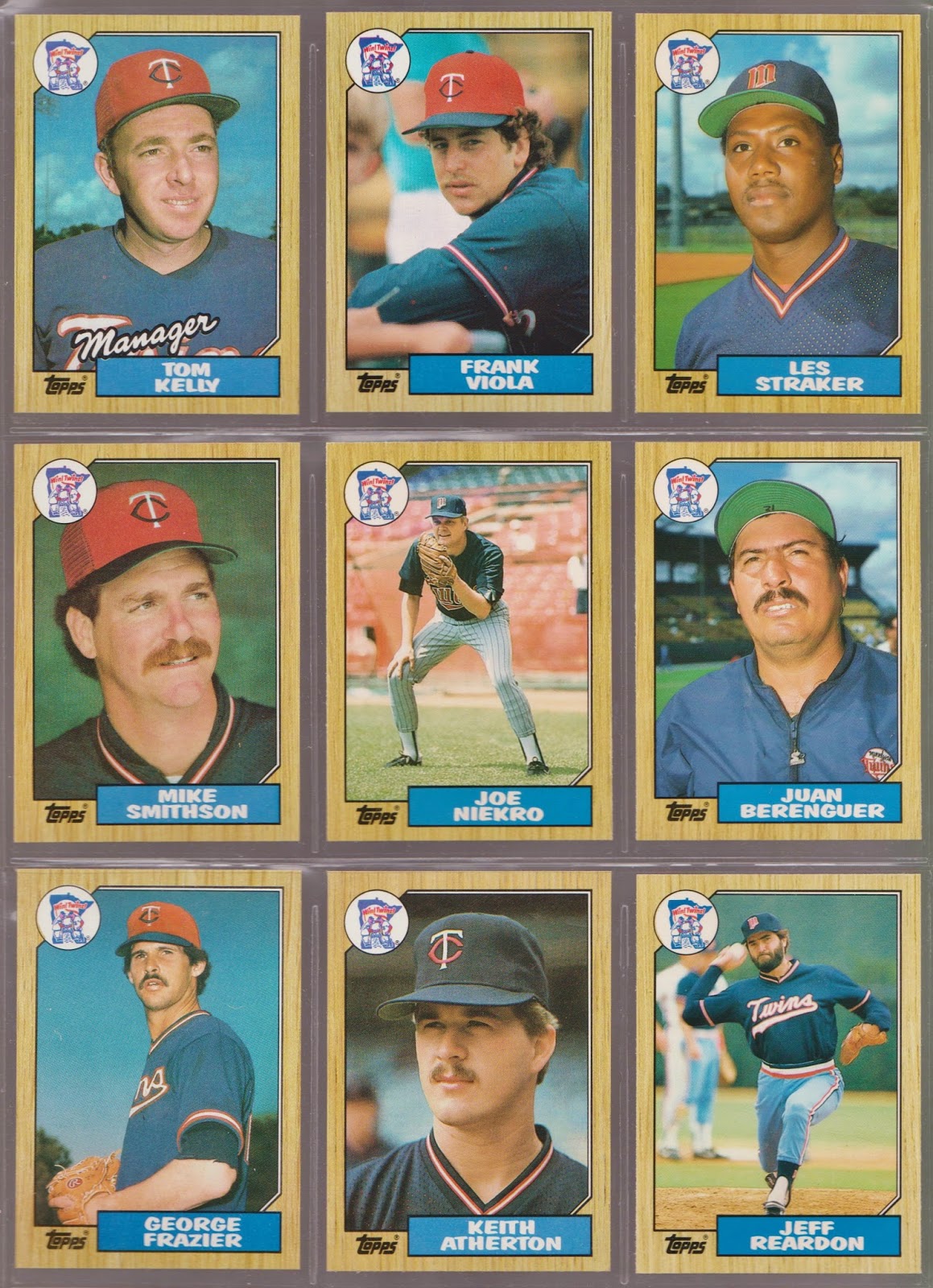 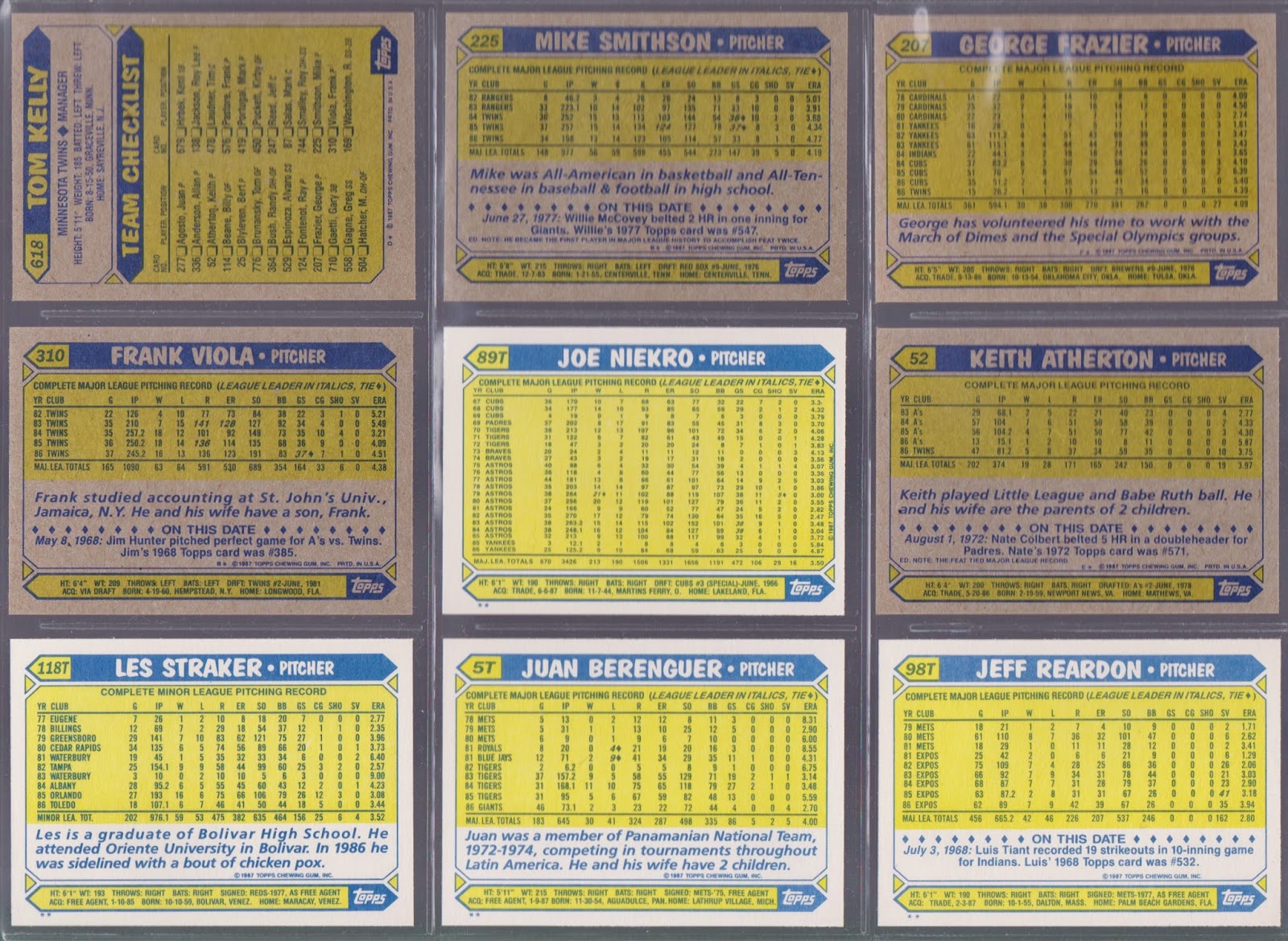 I'm not sure if this scheme of set organization will stick for me, but I'm sure that there'll have to be some slight adjustments to it if I do.  I started doing this with my 2014 set, which doesn't have any manager cards, so I used either the DH, 4th Outfielder, back-up catcher, or some other player that was heavily involved with the team throughout the season.  Of course, my primary resource for determining starting position players to organize my pages was baseball-reference, which is just so convenient.  As for the rest of the team cards, I kept them in order my player age either just after, or just before the two full pages used to develop the scheme shown.
Posted by ToppsBawlyn87 at 12:30 AM No comments:

Email ThisBlogThis!Share to TwitterShare to FacebookShare to Pinterest
Labels: 1987

Last, but not least, my Golden Era Ballot pick for the HOF is Jim Kaat, who played 25 seasons in the majors for 6 different teams.  During his career, Kaat has led his league in Wins, Complete Games, Shutouts, Games Started, and Innings Pitched.  Kaat has 16 Gold Glove awards and 3 All-Star appearances.  His career statistics in the pitching triple crown categories are 283 Wins, 3.45 ERA, and 2461 Strikeouts in over 4530 Innings Pitched.  Kaat made it to the World Series for the 1st time in 1965 with the Minnesota Twins, where he started 3 games with a 3.77 ERA in 14.1 innings pitched.  He pitched in the '70 ALCS with the Twins and '76 NLCS with the Phillies.  Kaat won his 1st World Series in 1982 with the Cardinals, where he pitched in 4 different games with a 3.86 ERA.  Here are all of my regular-issue Jim Kaat cards:
1960 Topps﻿ 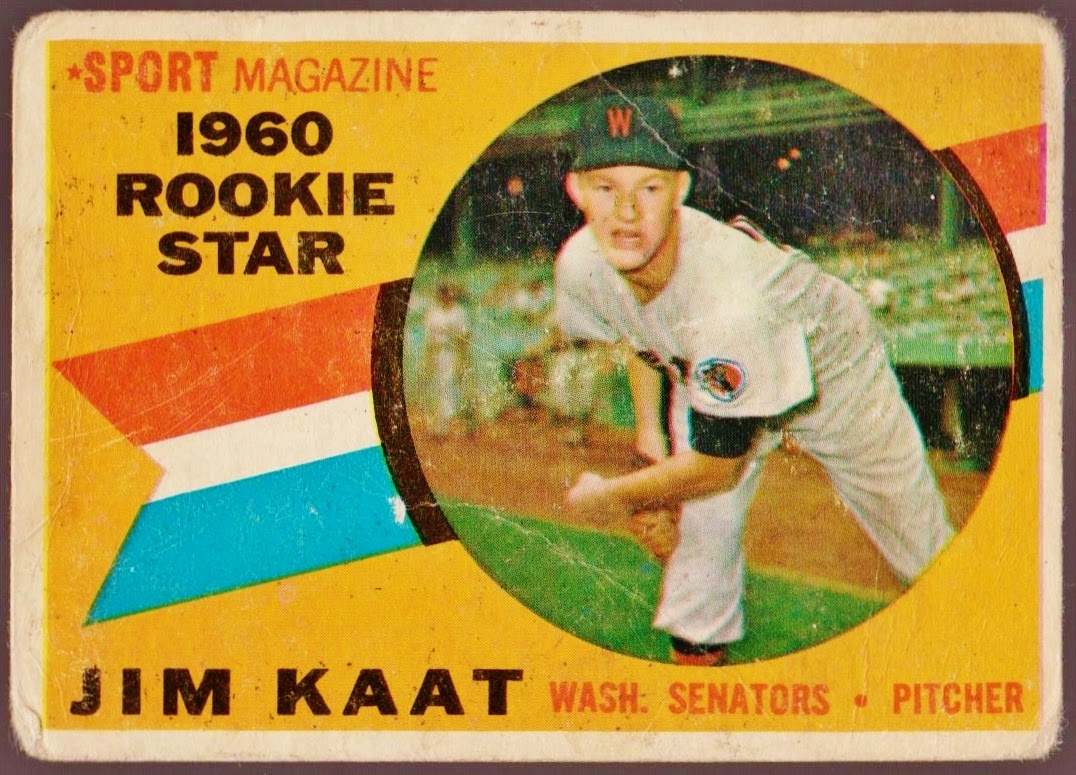 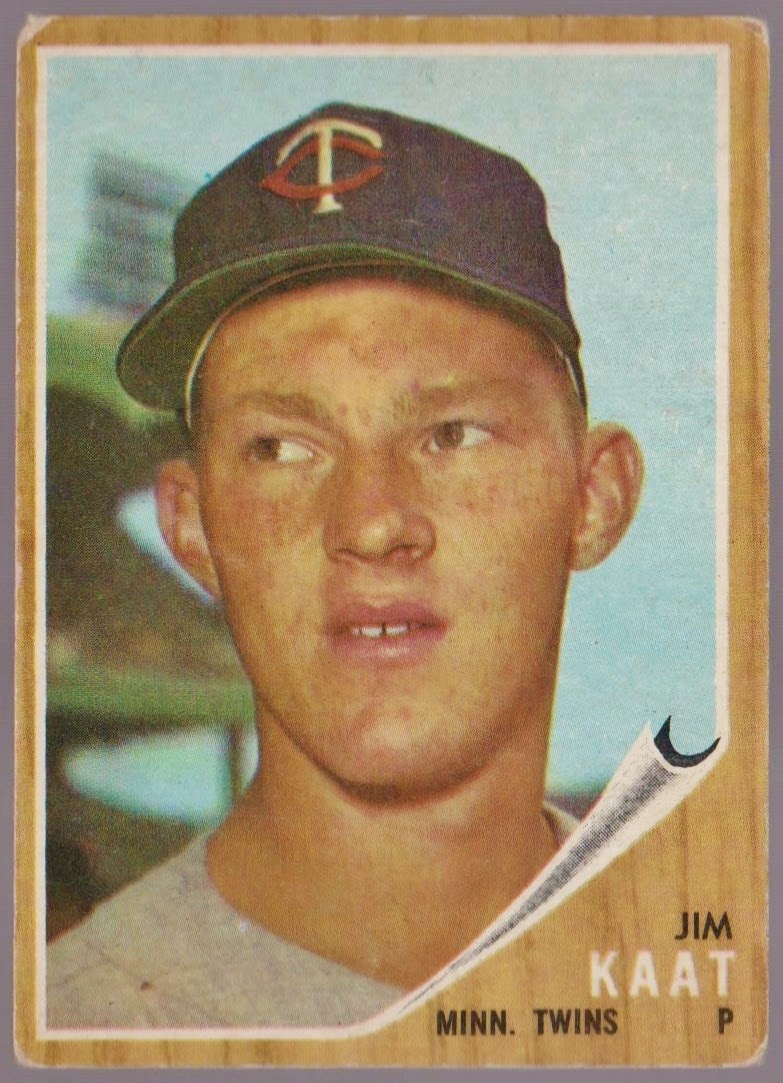 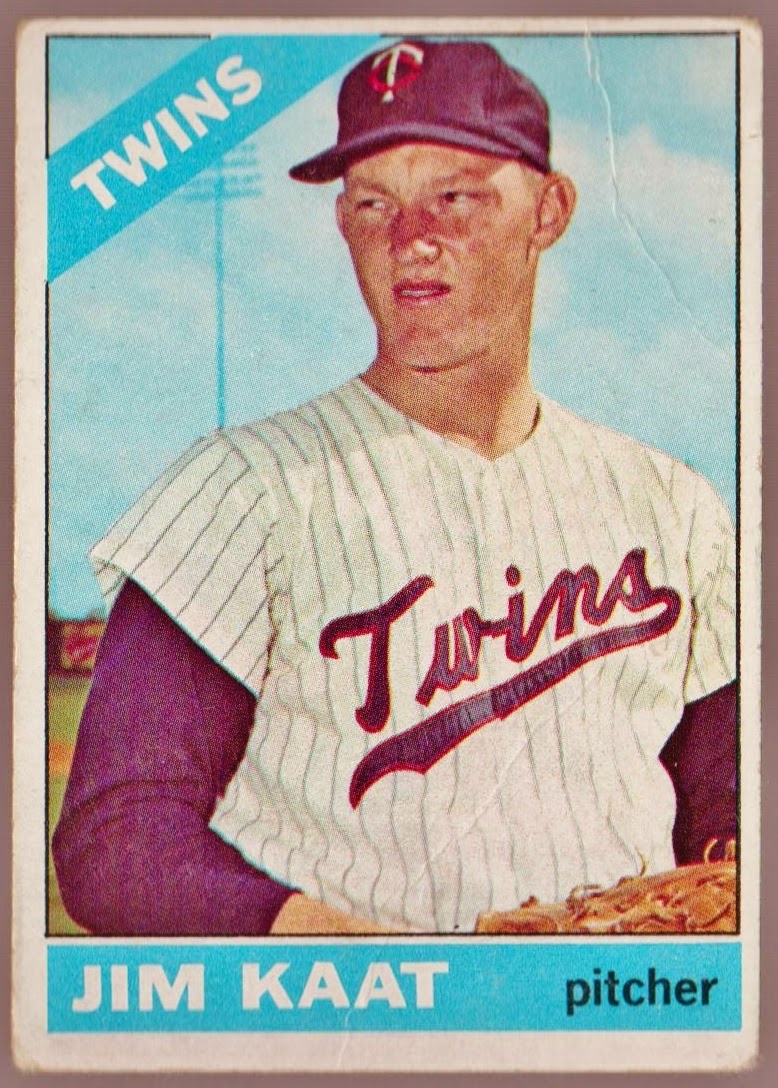 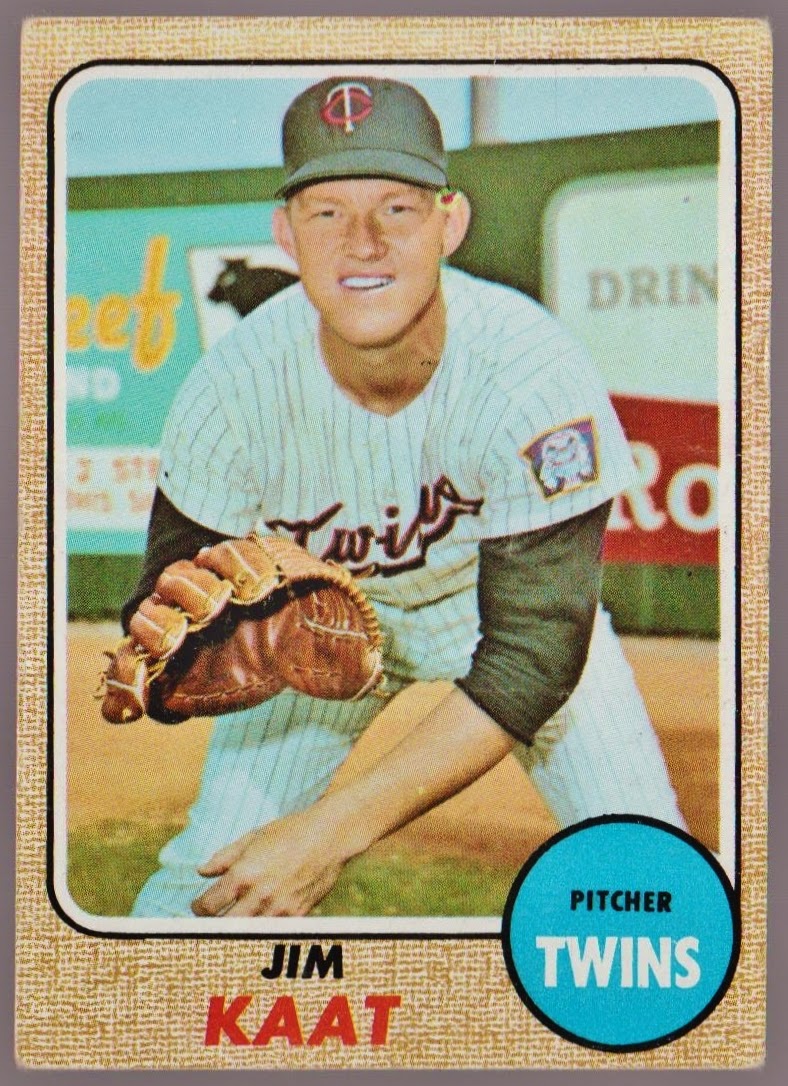 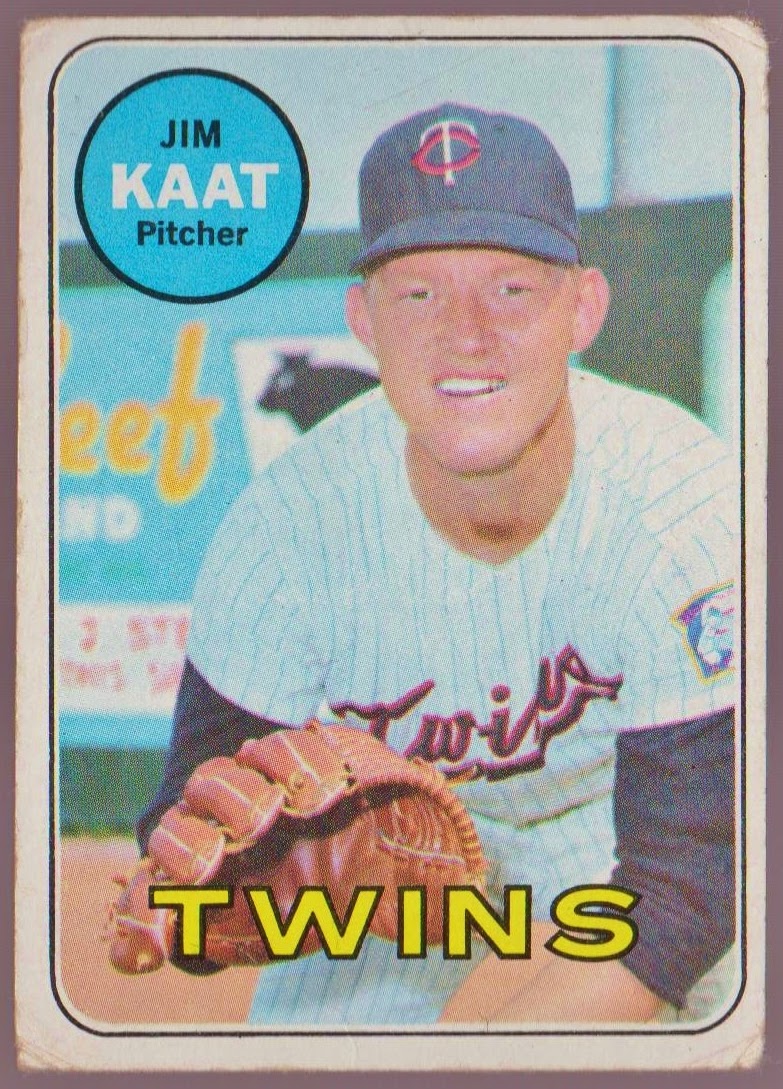 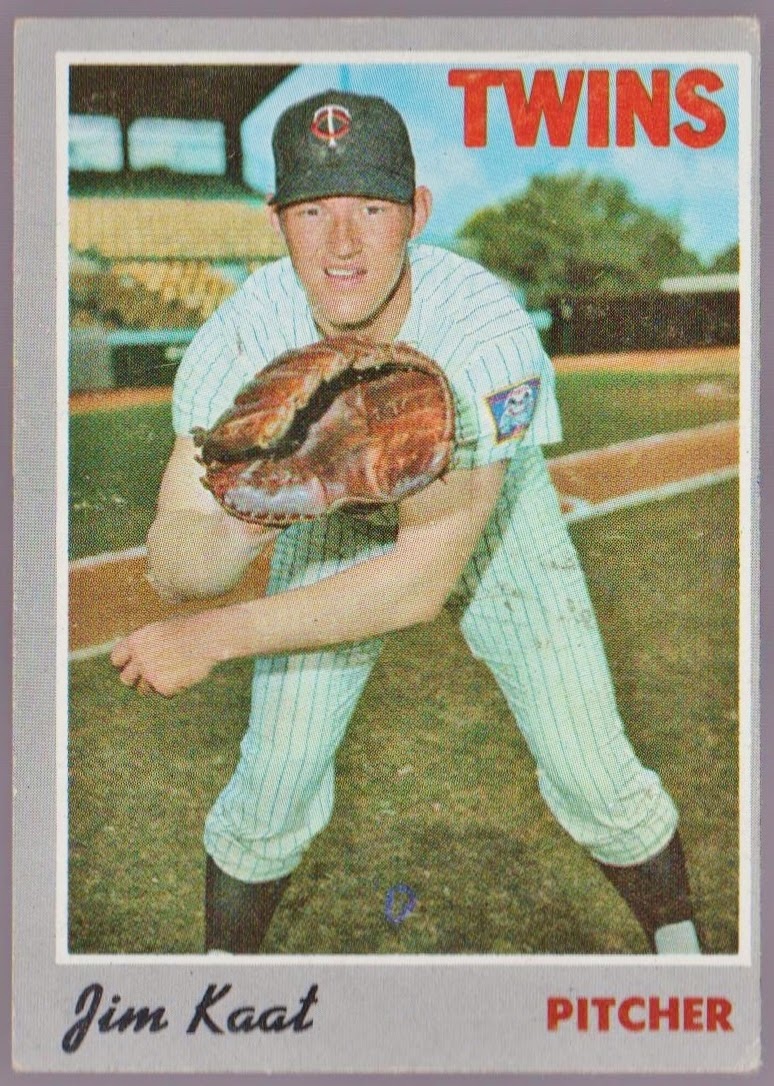 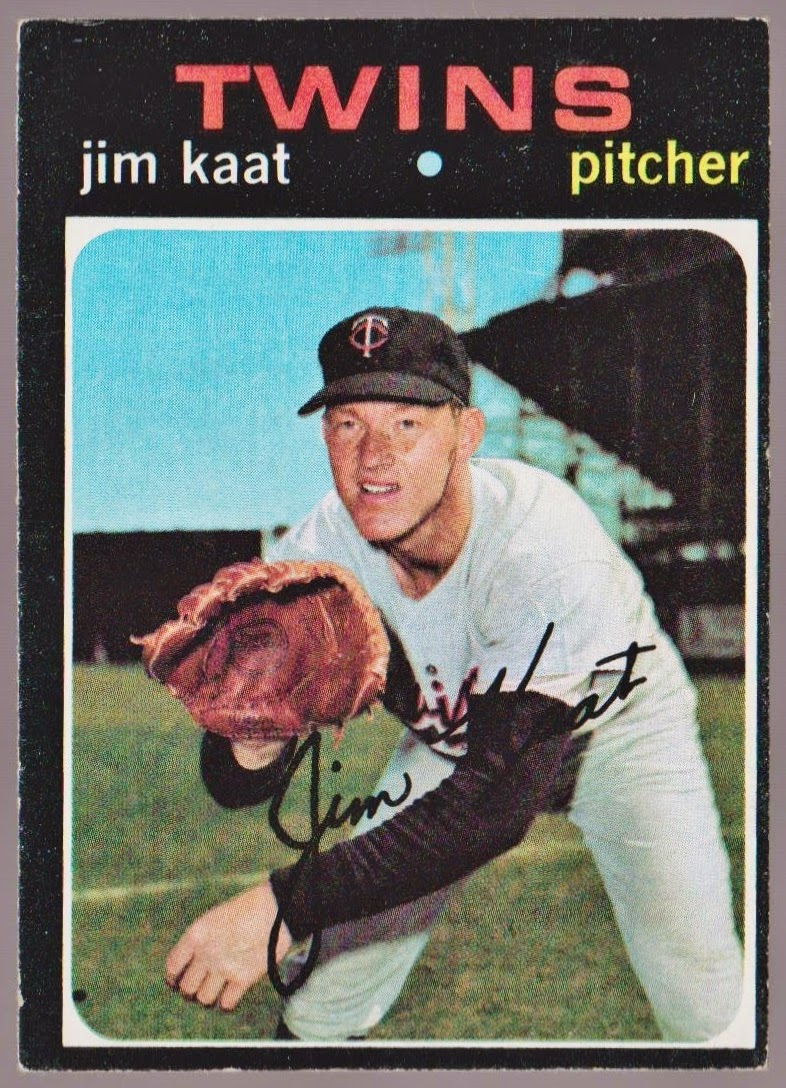 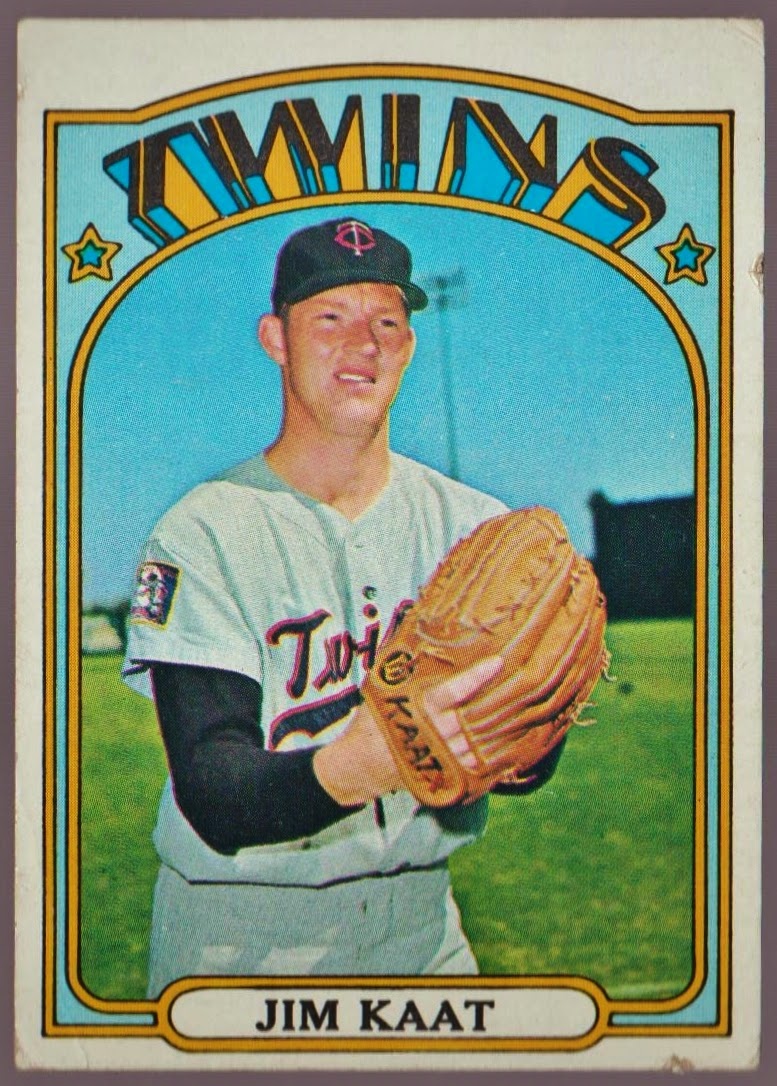 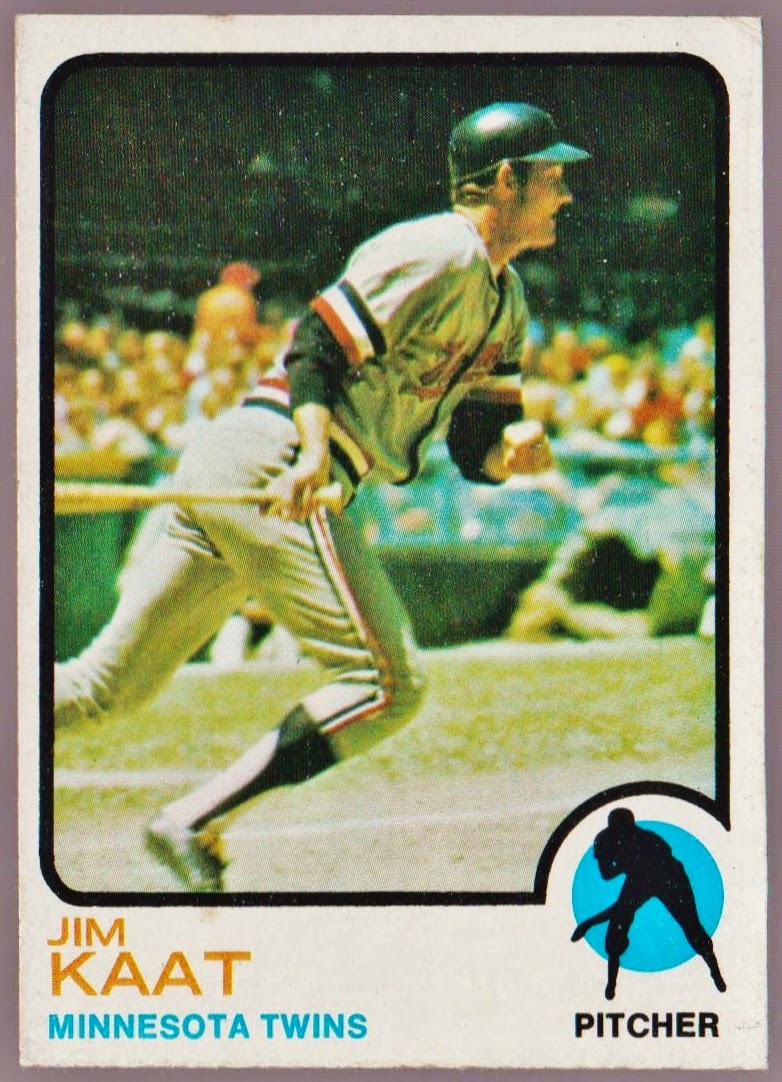 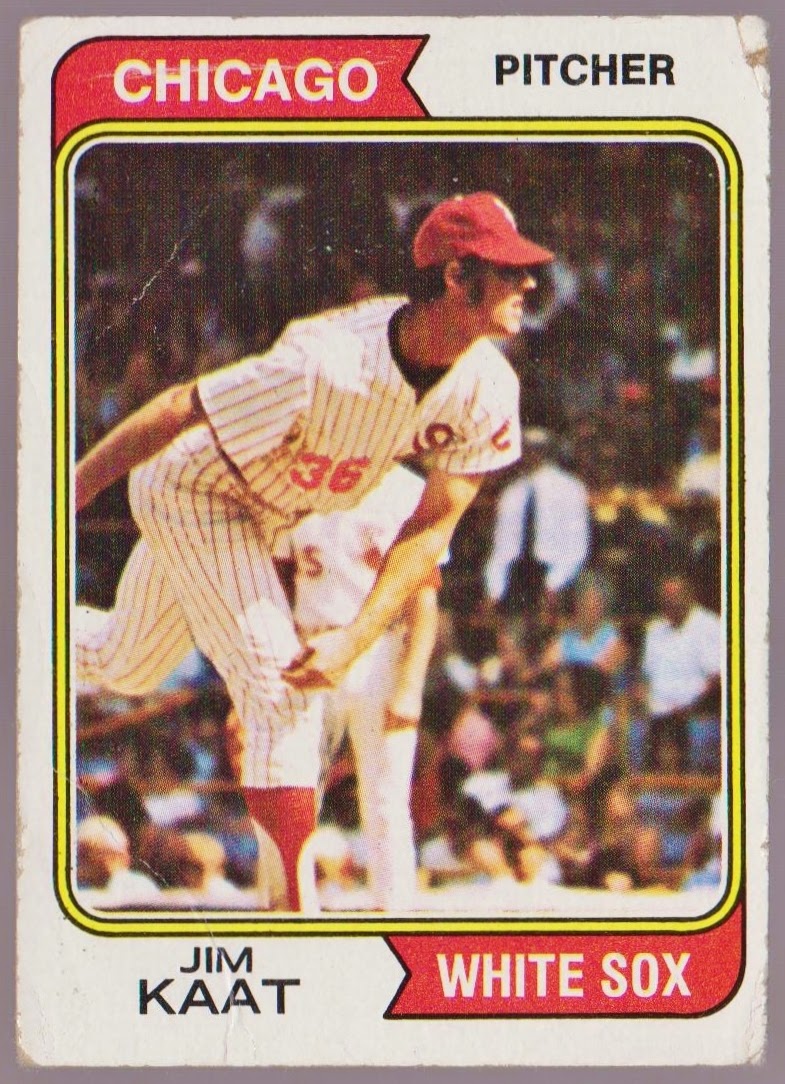 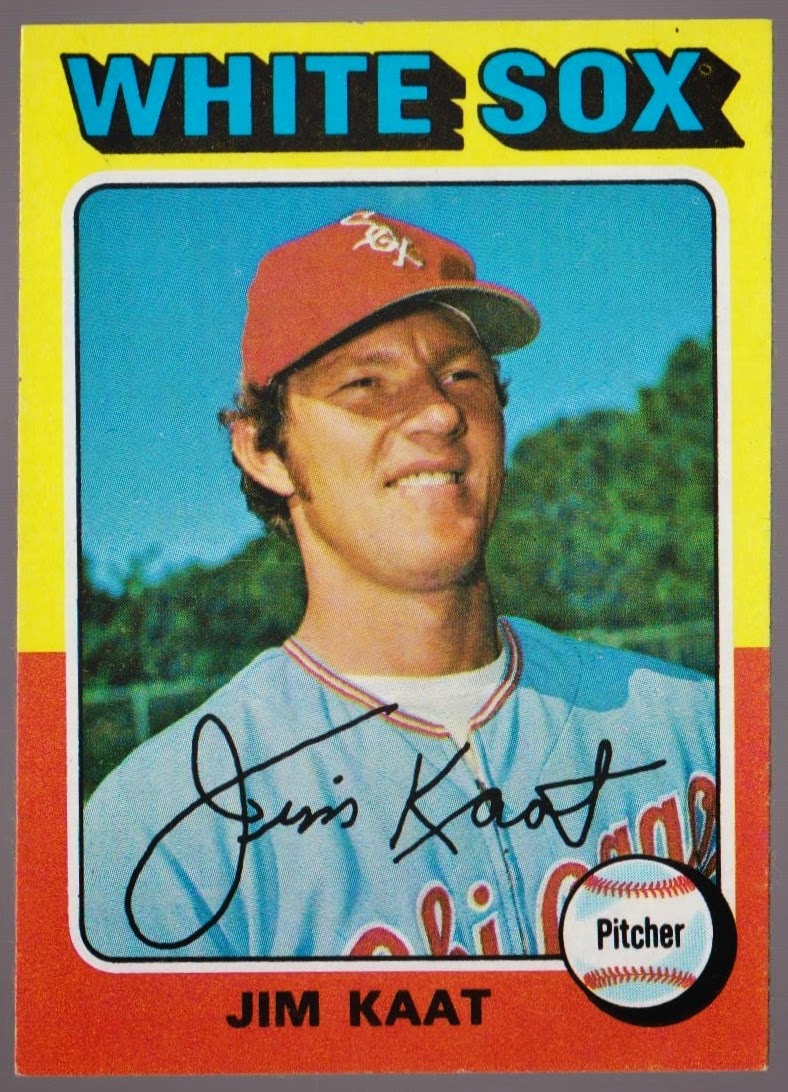 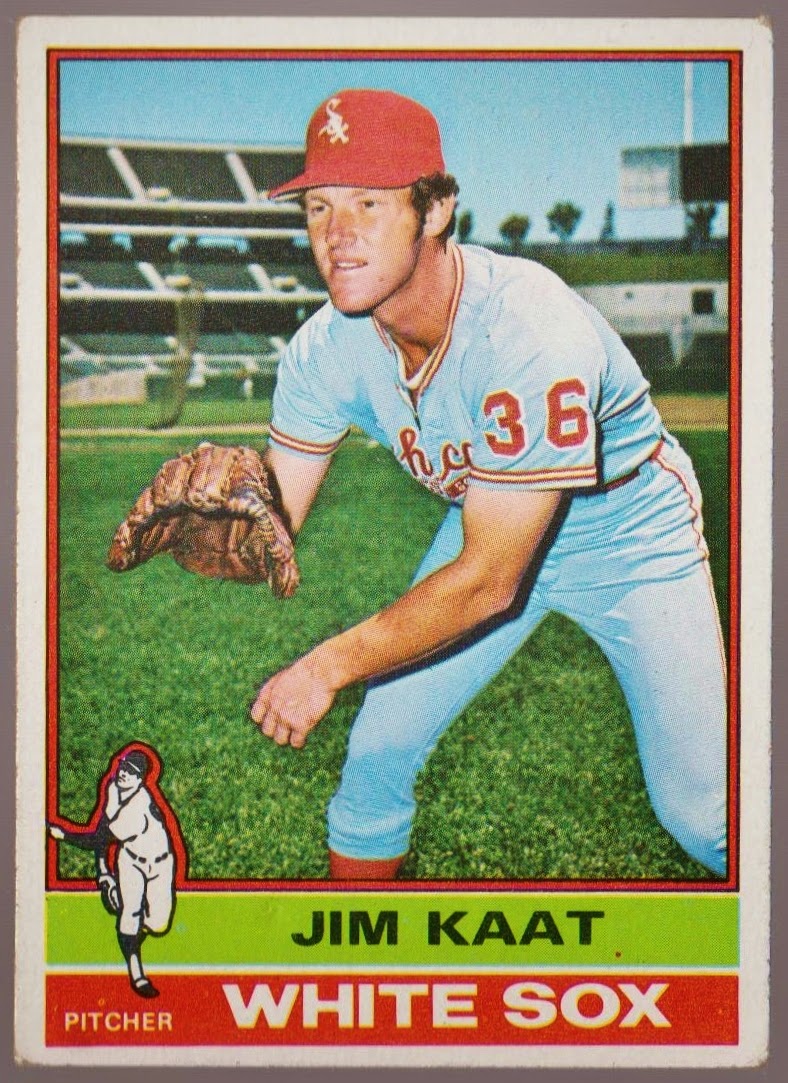 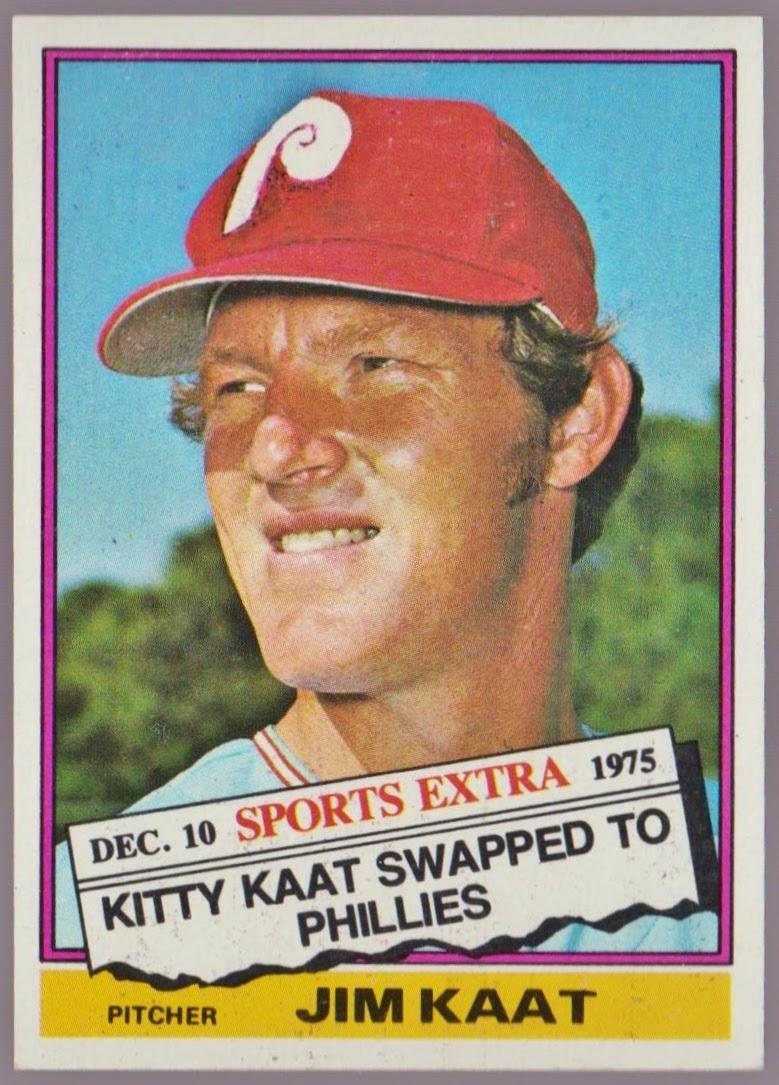 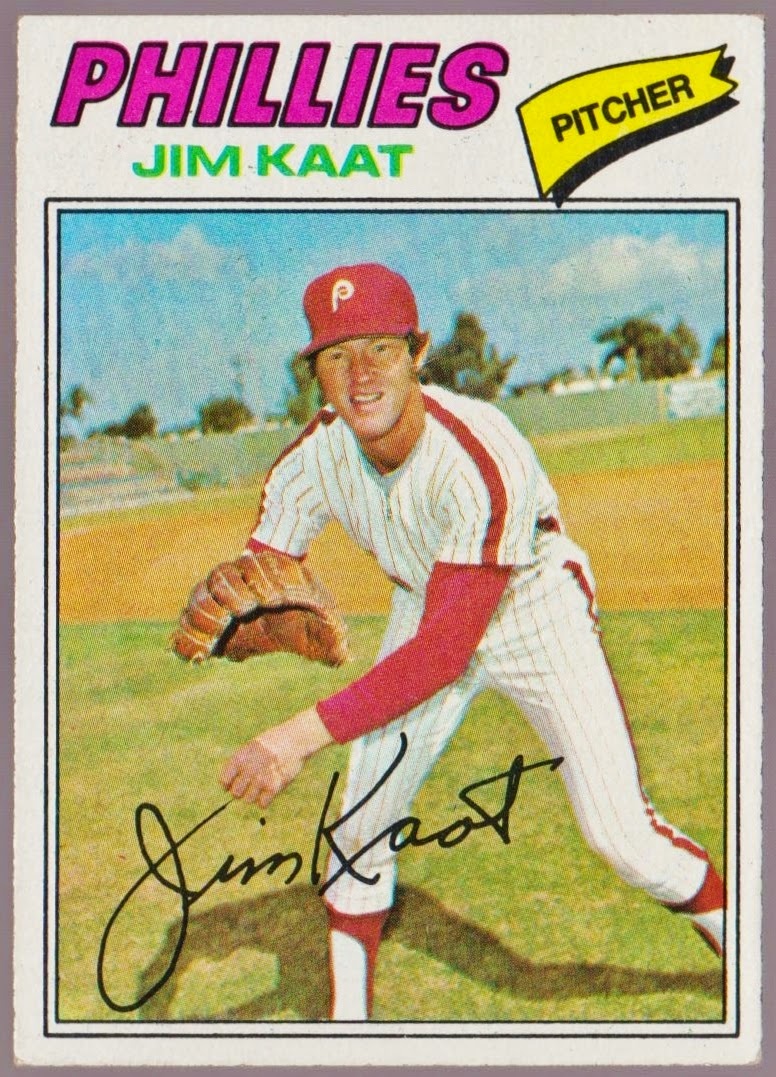 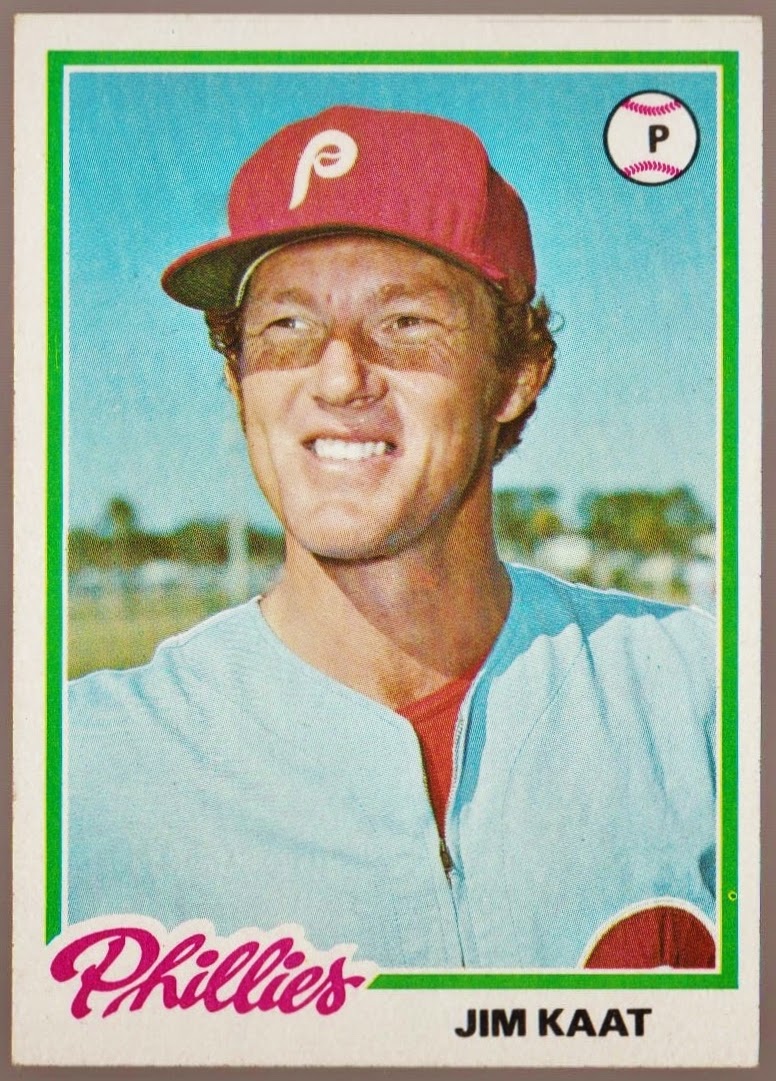 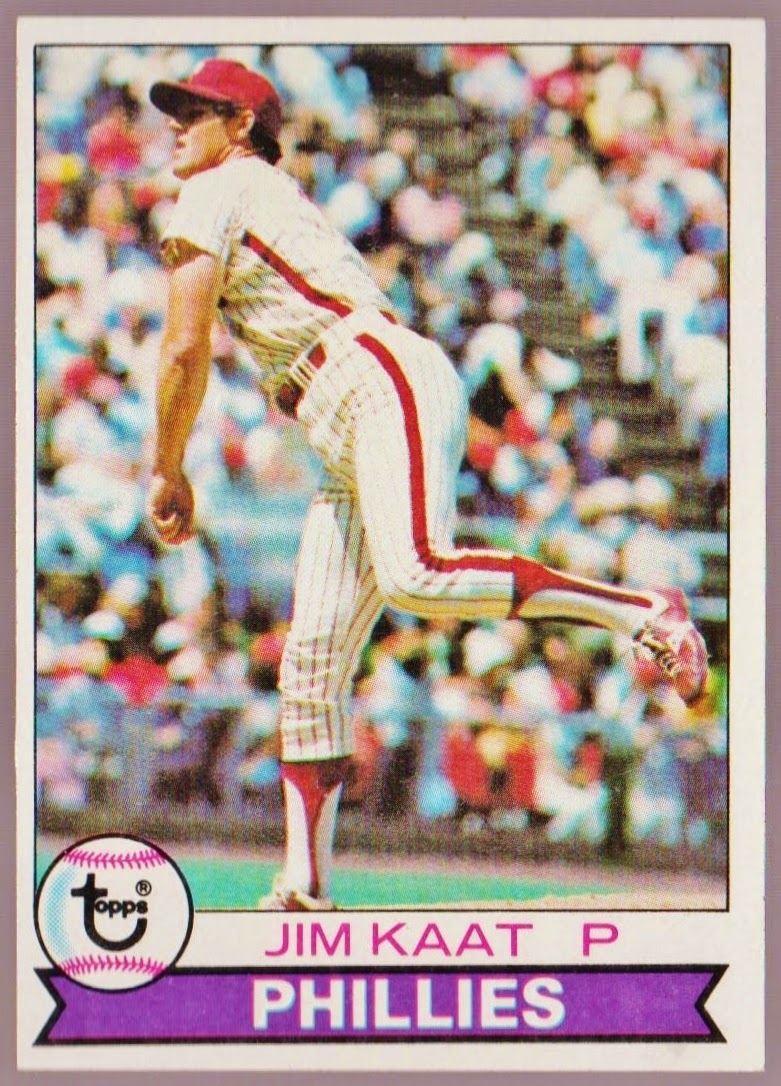 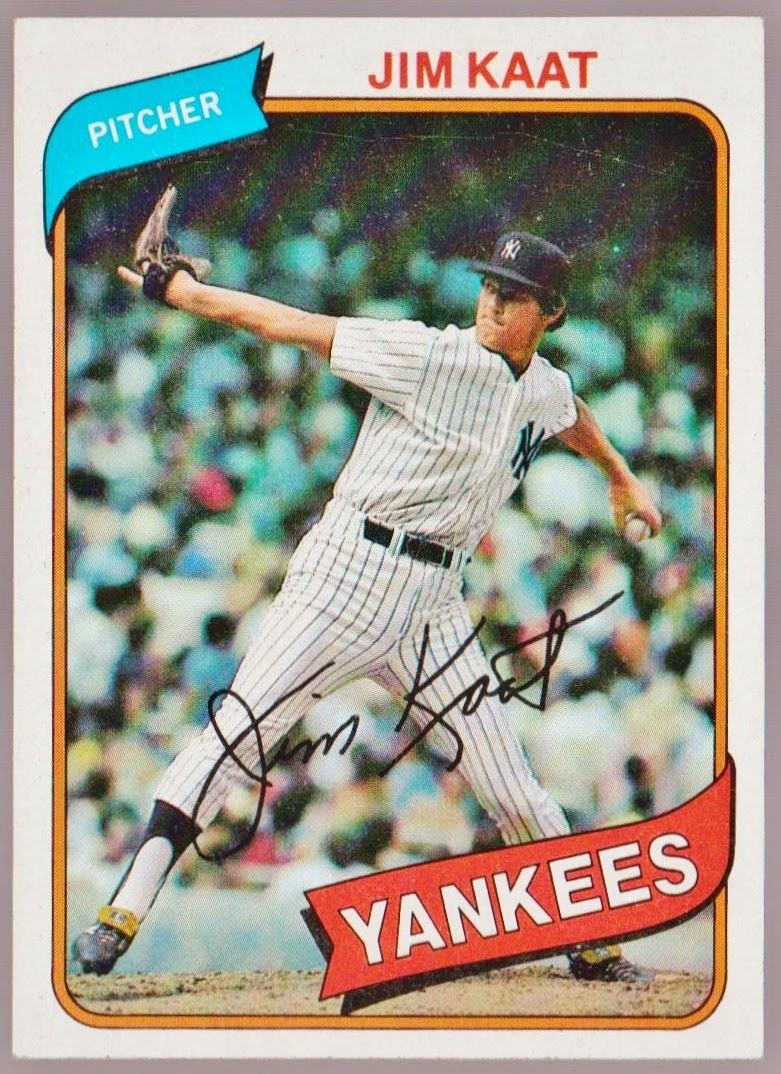 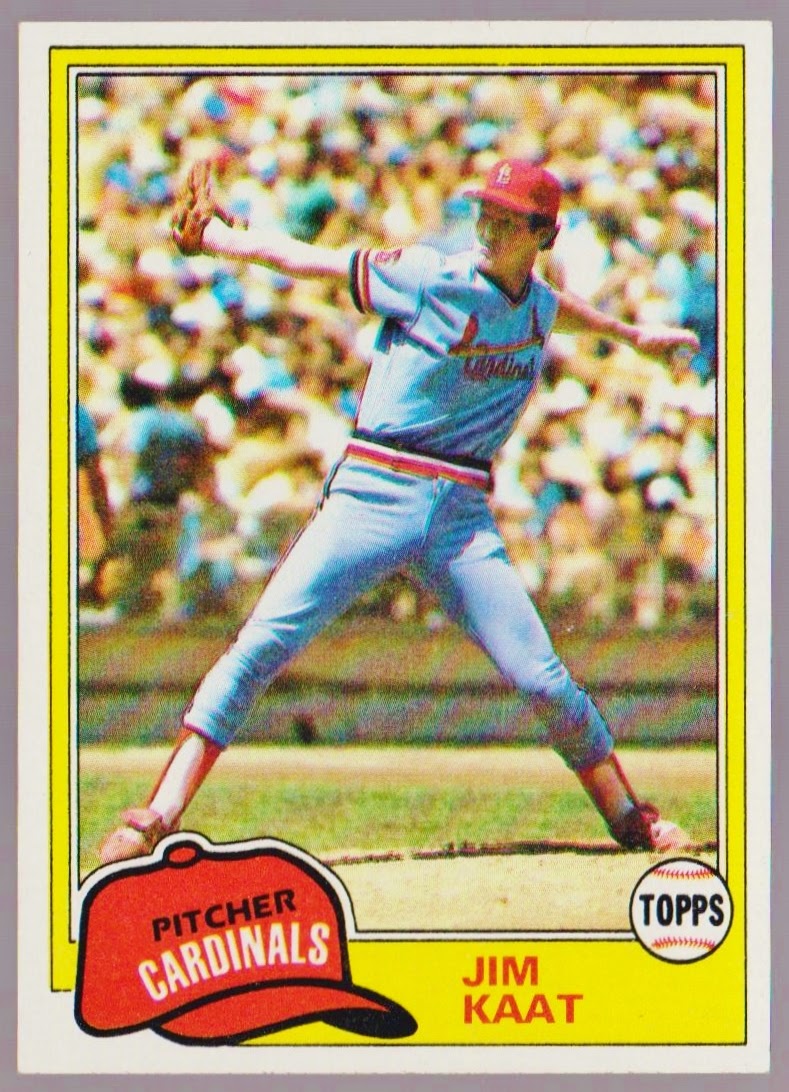 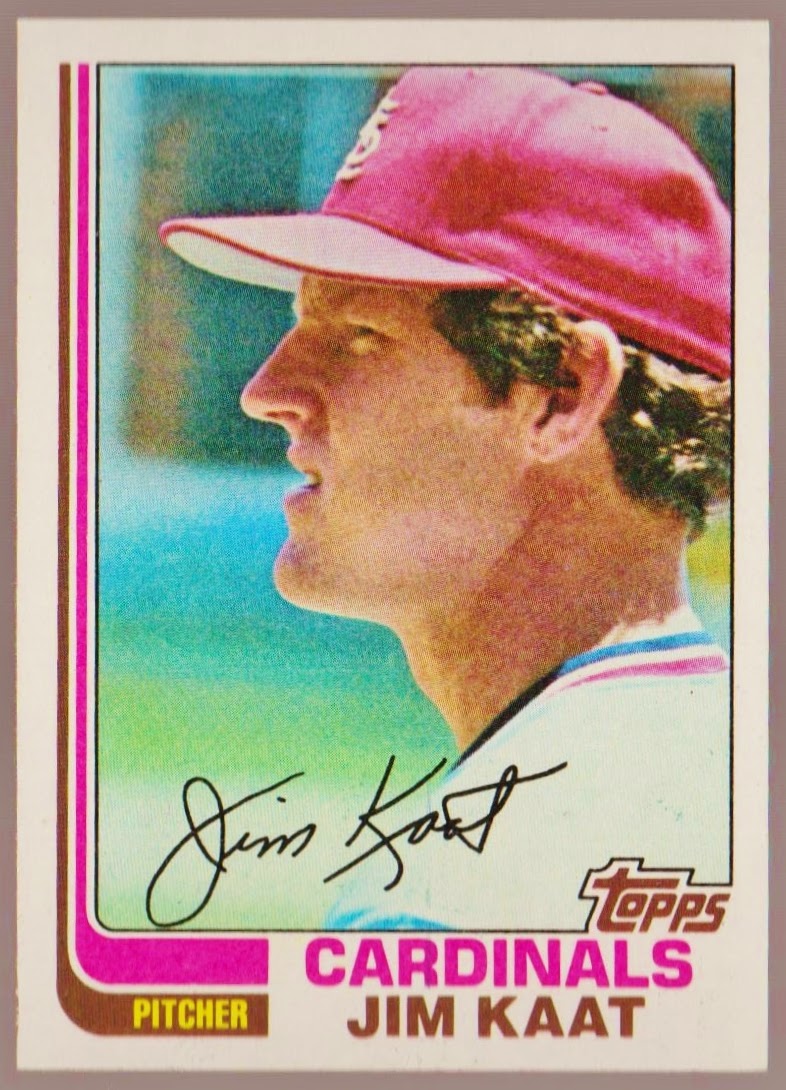 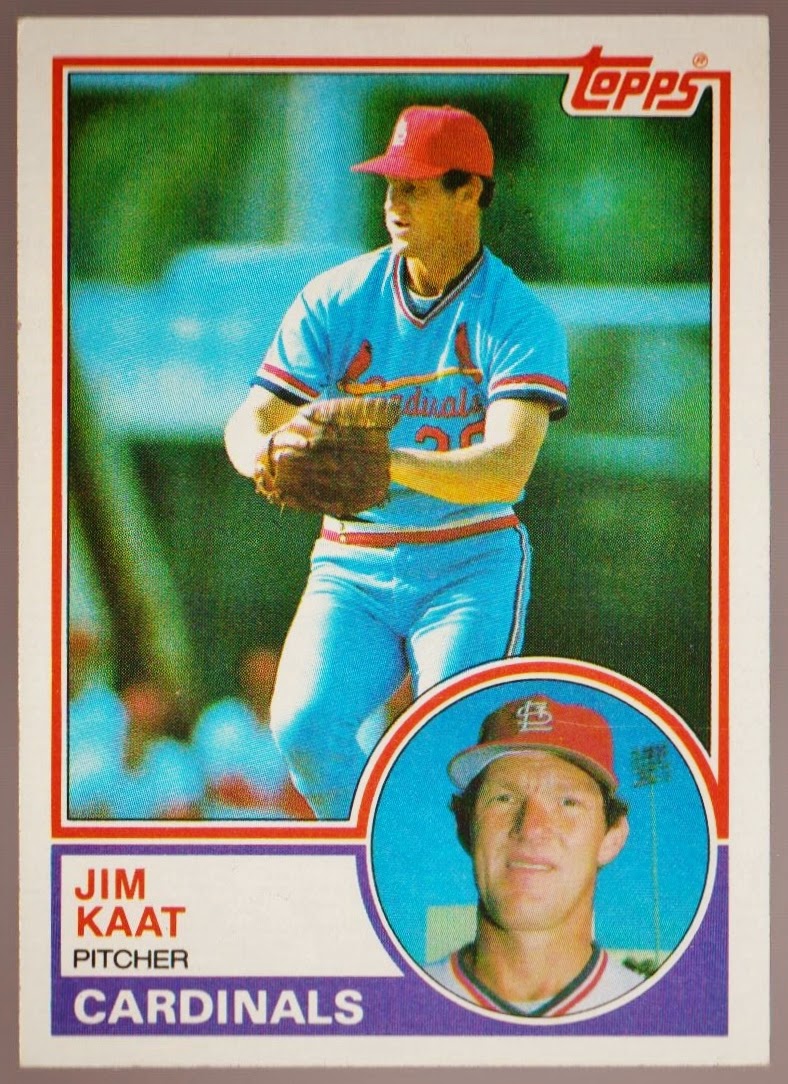