As this year's runner-up for the A.L. Cy Young award, Felix Hernandez has really been making some noise out in the Pacific Northwest throughout the past 10 seasons.  He last won the award in 2010, and was a runner-up again the year before in 2009.  Hernandez is quickly becoming a familiar face at the All-Star Games every year, having been selected during 5 of the past 6 years.  He led the league in ERA twice, posting a career best this year with a 2.14 ERA.  He's averaged over 30 starts and 200 innings pitched each year for the past decade with a .576 win percentage.  Hernandez is still only 28 years old, and is on pace for over 250 career win by the age of 38 (if he can maintain current pace for 10 more years).  Could he be the next 300 game winner? 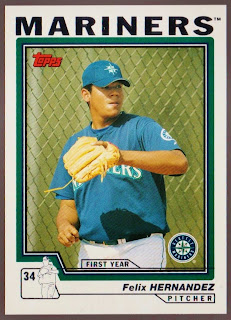 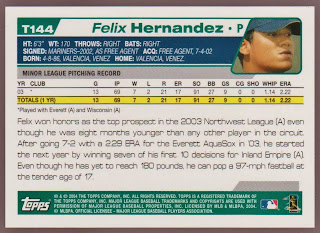 Posted by RoundtheDiamond87 at 9:12 AM

Email ThisBlogThis!Share to TwitterShare to FacebookShare to Pinterest
Labels: 2004