Today's acquisitions are significant, not only because they bring me within 28 cards of completing the '50 Bowman set, but because this acquisition represents my first baseball card trade in nearly 25 years.  I don't know if it's just my age, or a fact that card collectors these days are less open about their participation in this hobby.  If it weren't for card shows and online auctions, I wouldn't even believe that people still collected baseball cards.  All of this has made trading cards seem very difficult.

I've often read about trades being made by other baseball card bloggers, and wondered how I would conduct a trade through modern technology if the opportunity ever presented itself.  Here are the results from my first attempt.  Using the grading and pricing sheet posted on one of my blog tabs, we were able to standardize an equal value based on a combination of condition and list prices.

I wonder how many years will pass before my next successful trade.
Posted by RoundtheDiamond87 at 11:02 PM 1 comment:

Another completed team set to check off from my '50B collection wantlist thanks to the acquisition of Warren Spahn yesterday.  The online seller didn't mention that the card had been trimmed (which is generally a no-no for me), but at roughly 5%-6% BV, I'll just ignore leaving feedback for this purchase altogether.  Generally, unmentioned trimmed cards will result in automatic negative feedback from me (actually never followed through).  The seller posted pictures of both sides of the card alongside another, and referred to the pictures for reference.  You be the judge. 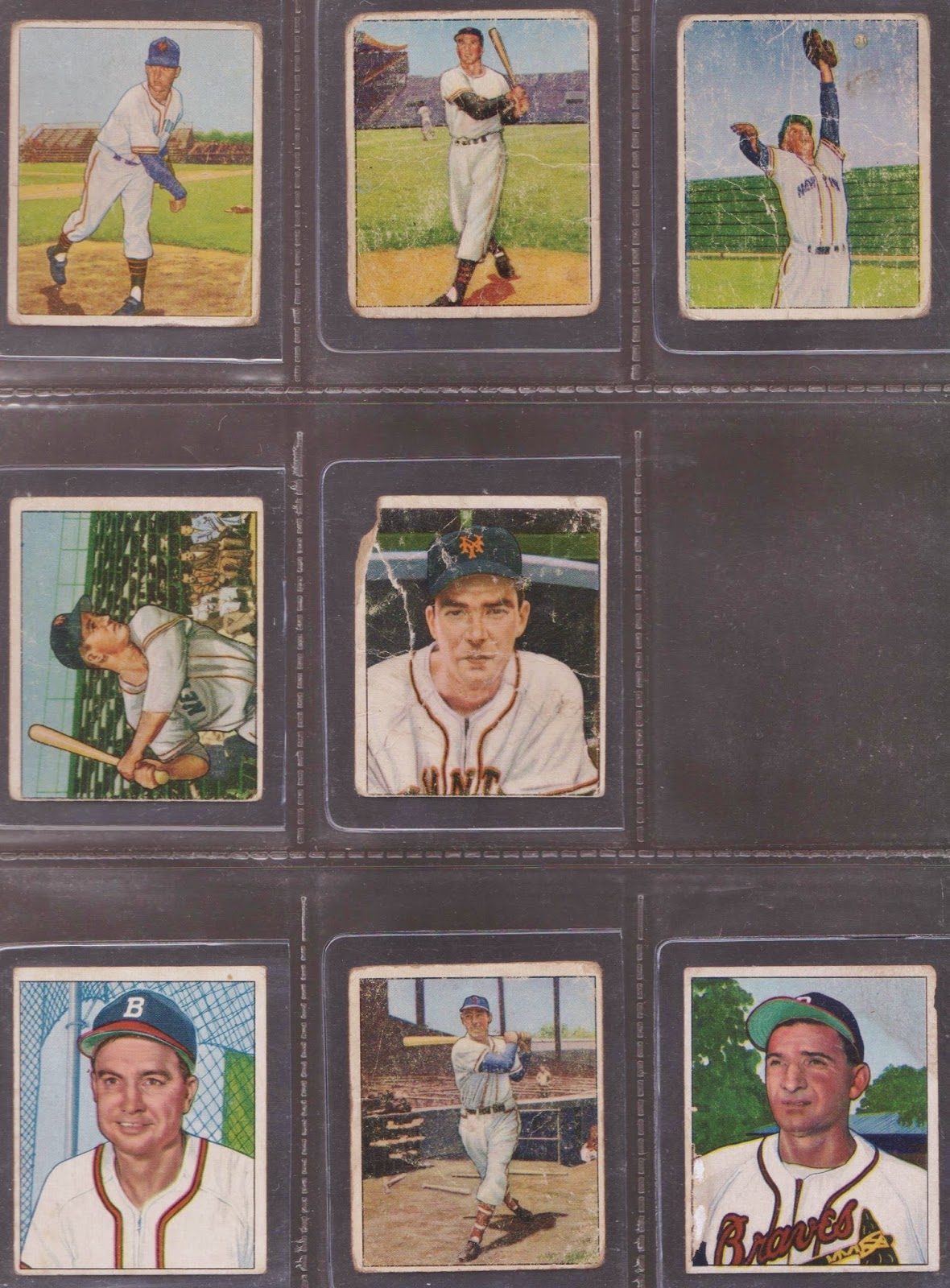 Anyhow, the Boston Braves' 83-71 record under Hall-of-Fame Manager Billy Southworth was good enough for 4th in the NL and 8th Overall in 1950.  It would have been nice if Bowman had made a Southworth manager card in 1950 to commemorate a man whose playing career had spanned from 1913-1929, and then again as a manager from 1929-1951.  Instead, 8-time all-star catcher, Walker Cooper ('50B #111), would lead off as the veteran player for the '50 Braves team.  Cooper was backed up that year by the runner-up for the '49 NL ROY, Del Crandell ('50B #56).  Crandell would miss the Braves final two seasons in Boston due to military service during the Korean War, but would come back to the Brave team in Milwaukee for the 1953 season.  Former MVP and 6-time all-star, Bob Elliot ('50B #20), played all but 12 games as the starting 3rd Baseman in 1950. 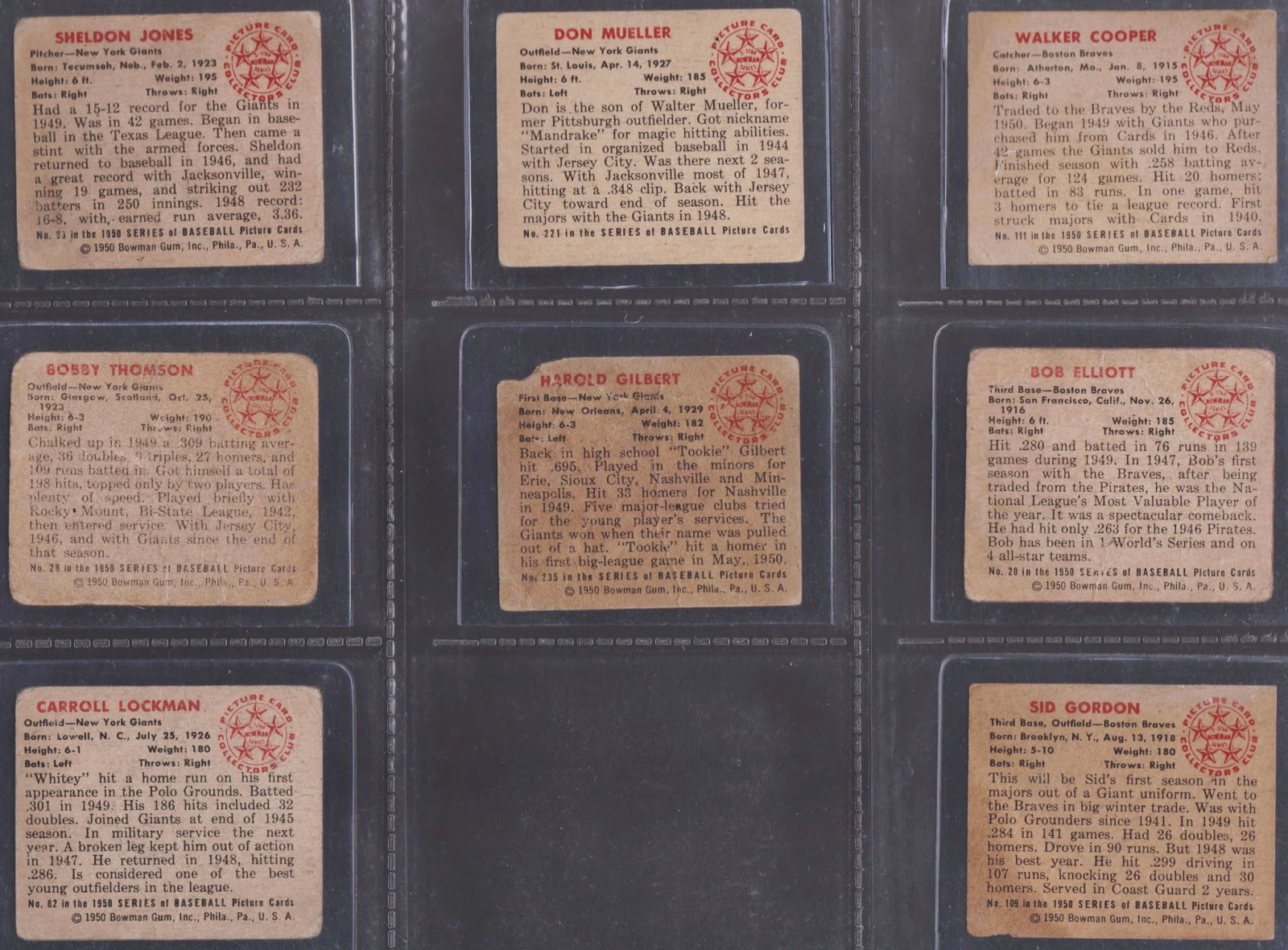 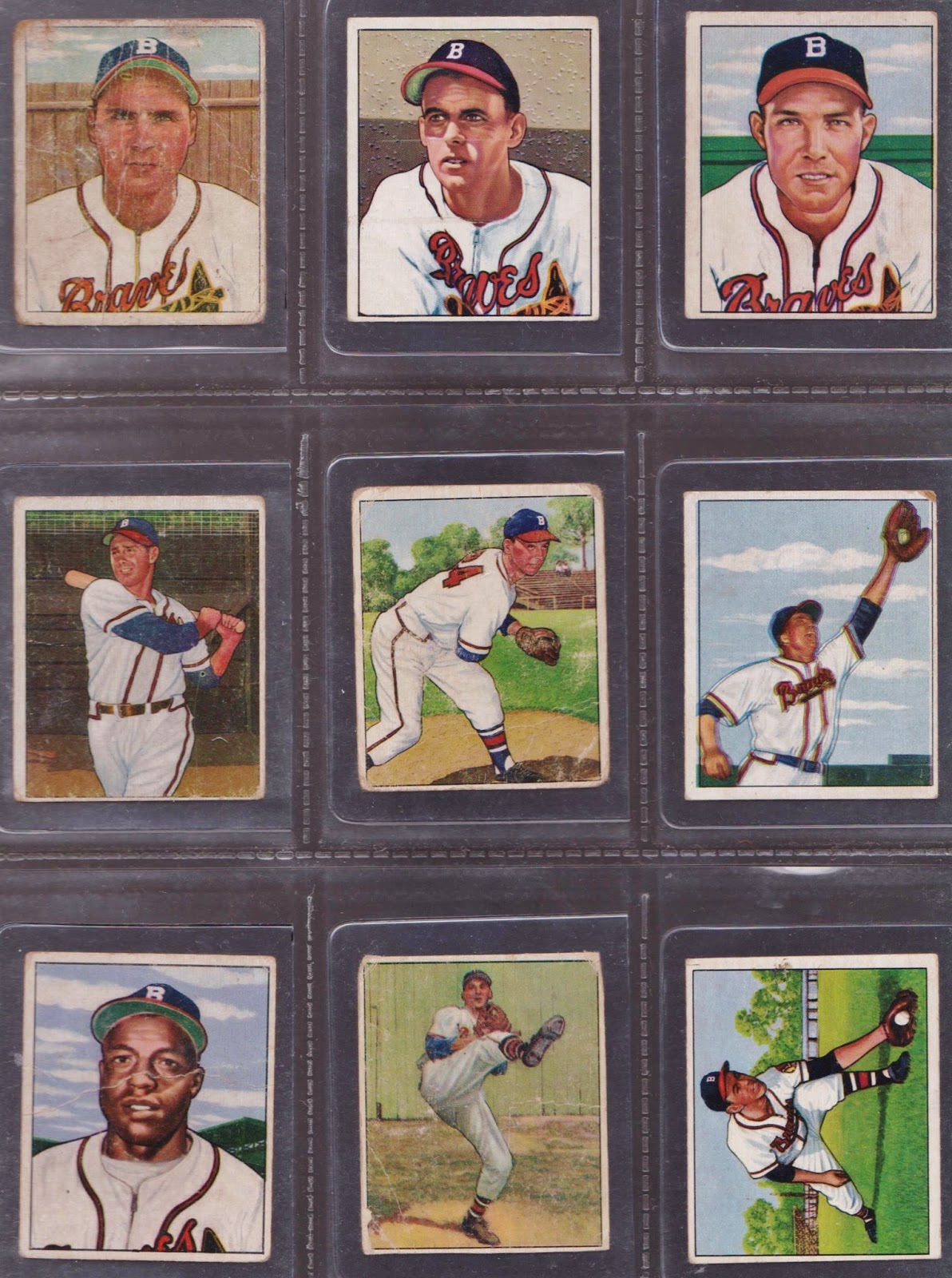 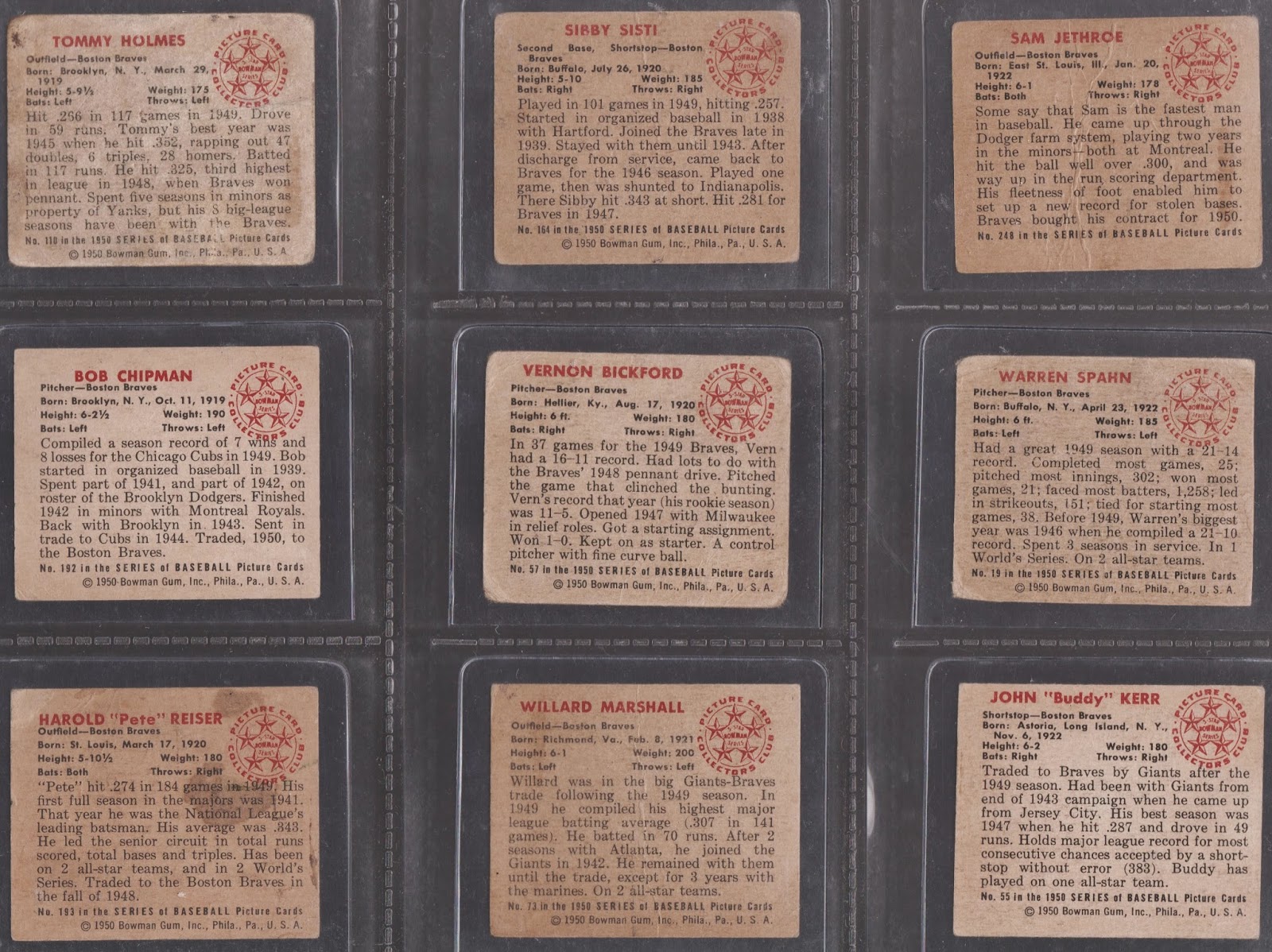 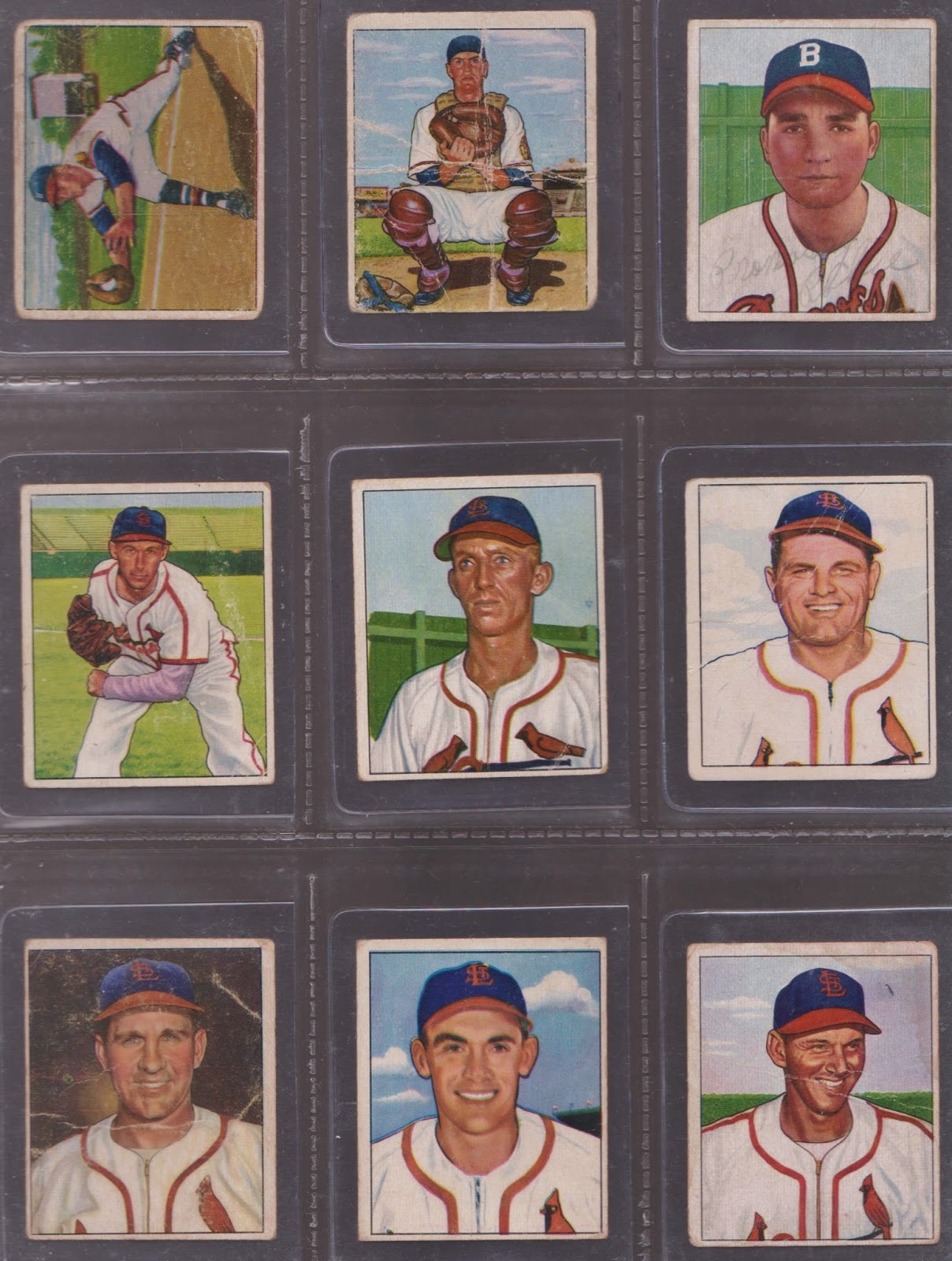 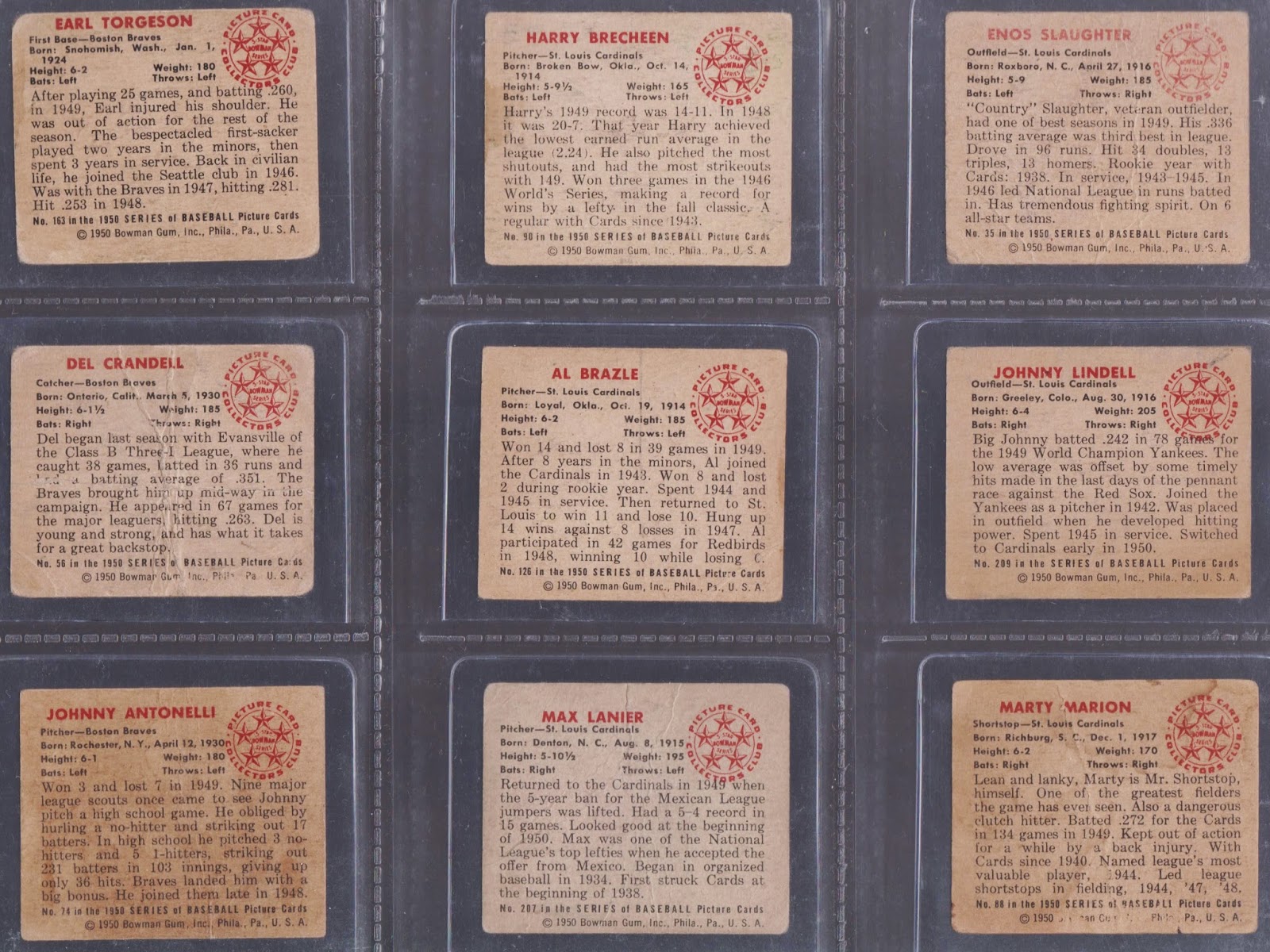 Posted by RoundtheDiamond87 at 11:32 AM No comments: 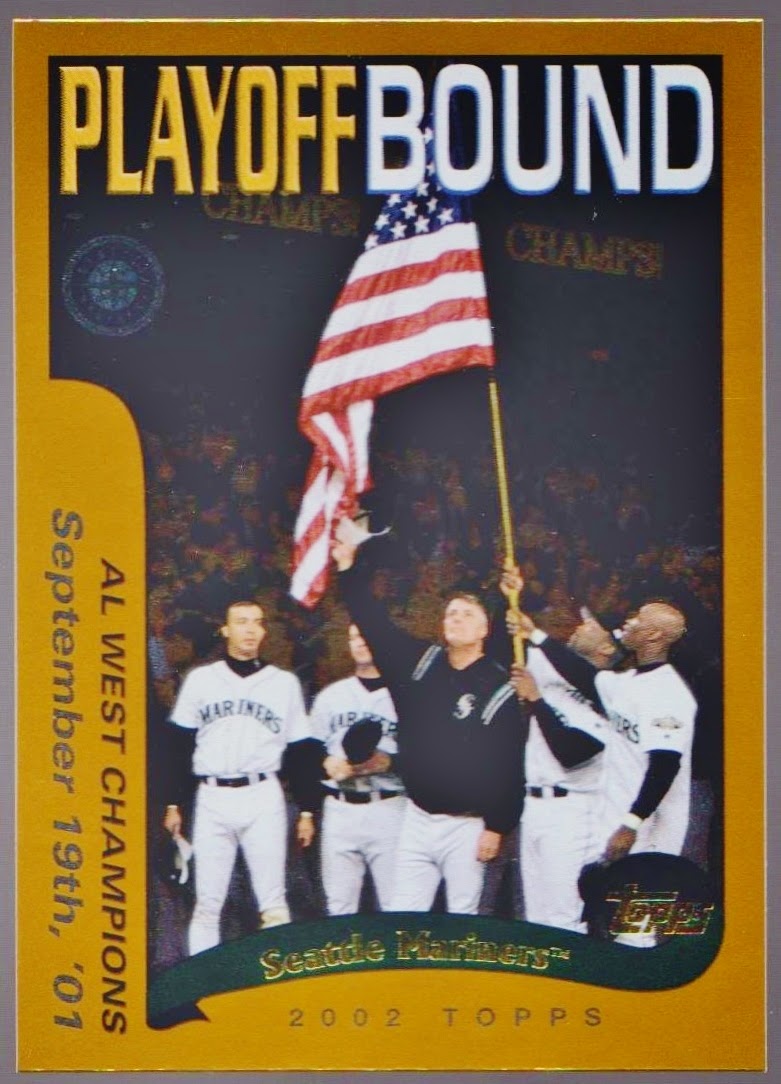 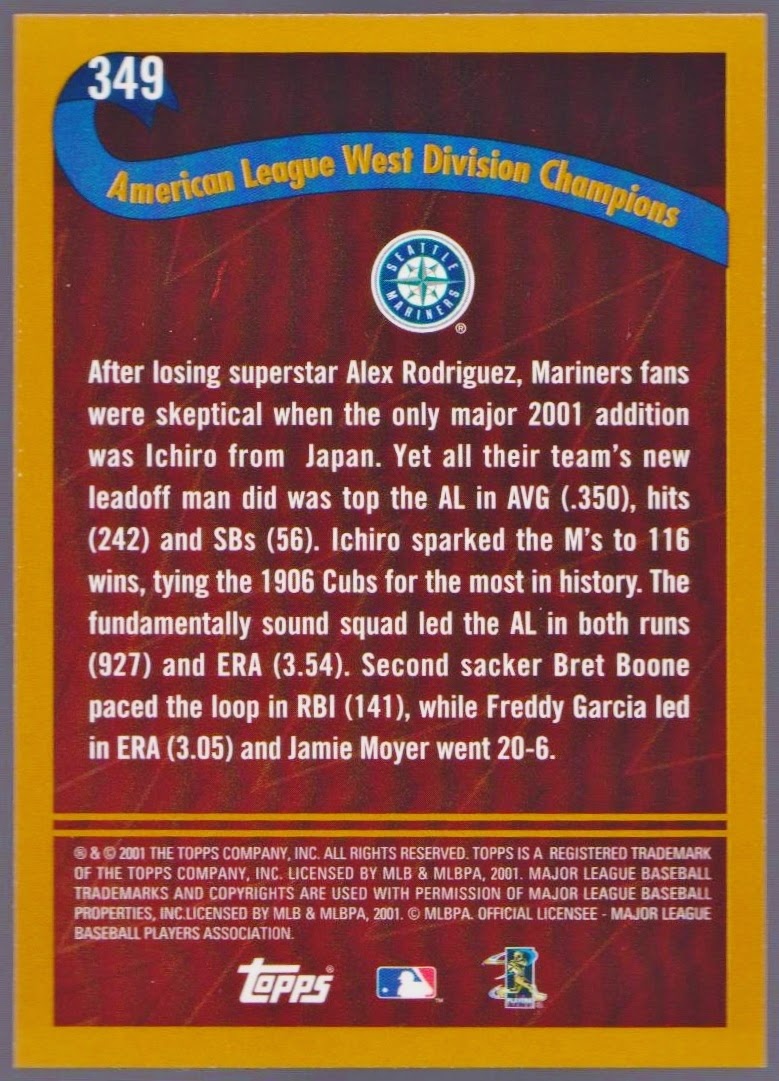 Posted by RoundtheDiamond87 at 10:43 PM No comments:

Email ThisBlogThis!Share to TwitterShare to FacebookShare to Pinterest
Labels: 2002

Now, here's a post that typically doesn't get much attention: checklist cards.  Topps has been manufacturing their checklist sets in roughly the same 10-card format since 2009.  The card fronts typically highlight some player achievement from the previous season, while the card backs feature a portion of the base set checklist.  This 10-card subset serves as the back of my set binder until the Traded/Update set is released.  This year's Series 1 checklist set features 5 cards: #47 C.Davis, #149 M.Cabrera, #253 T.Helton, #132 H.Alvarez, and #321 M.Rivera. 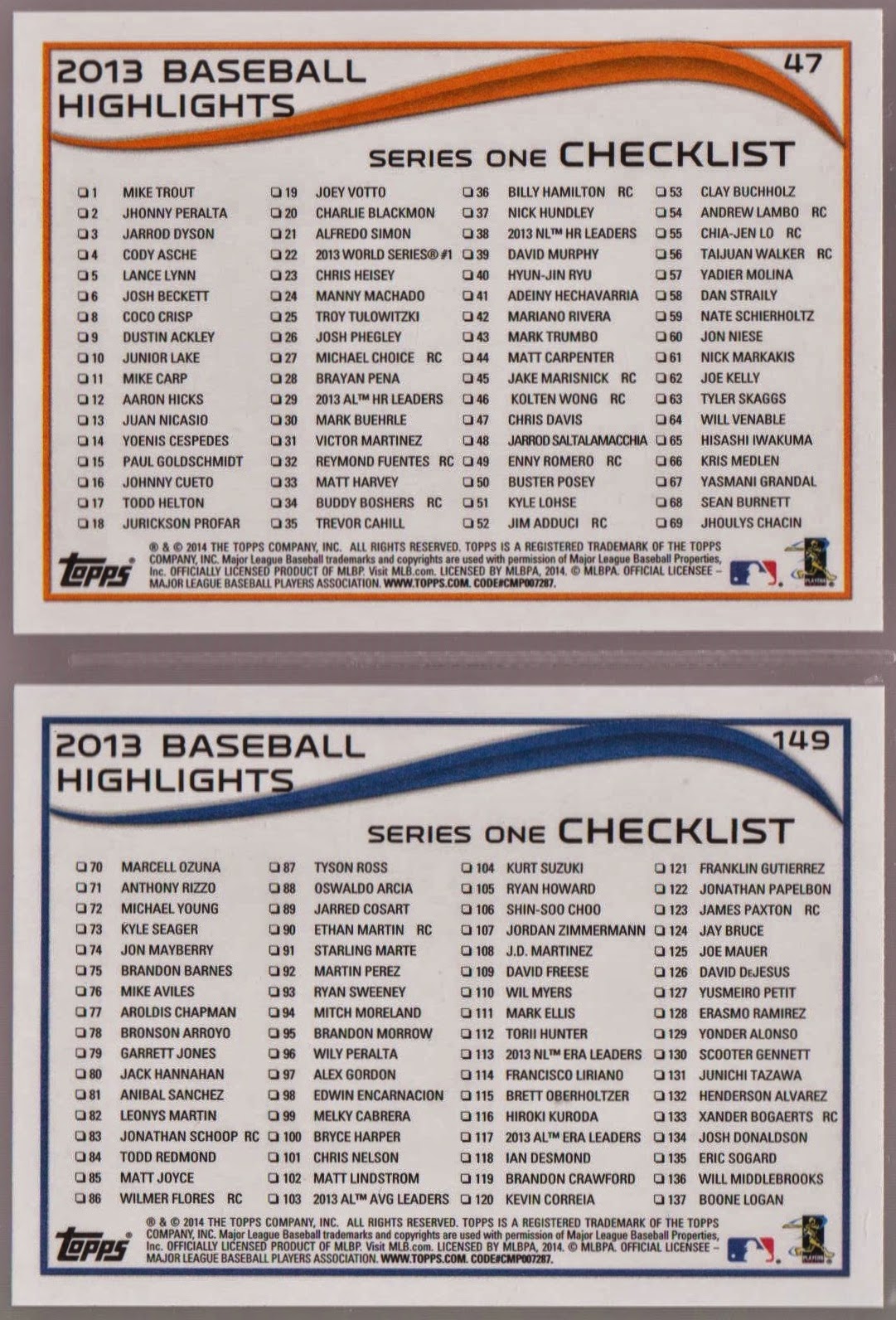 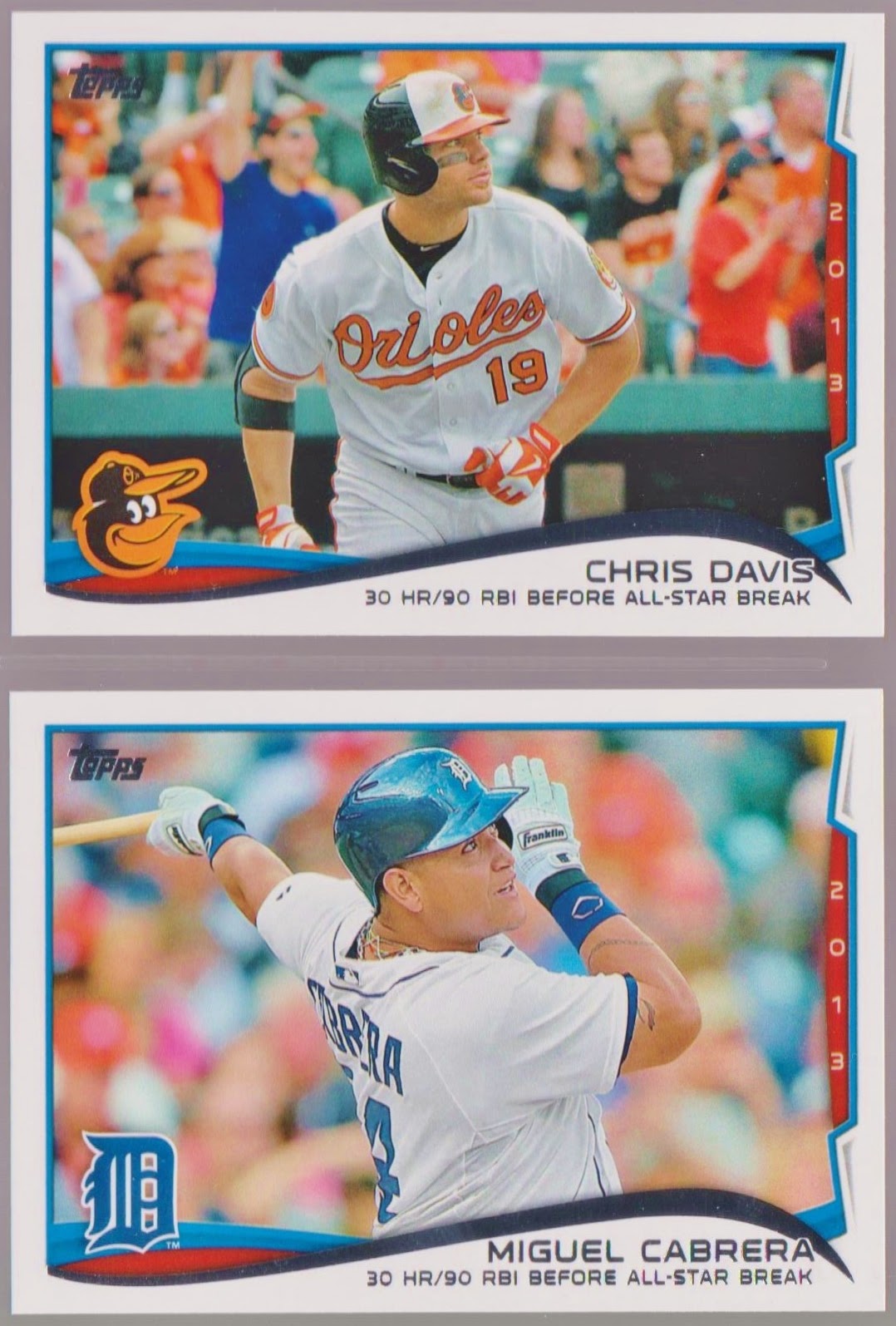 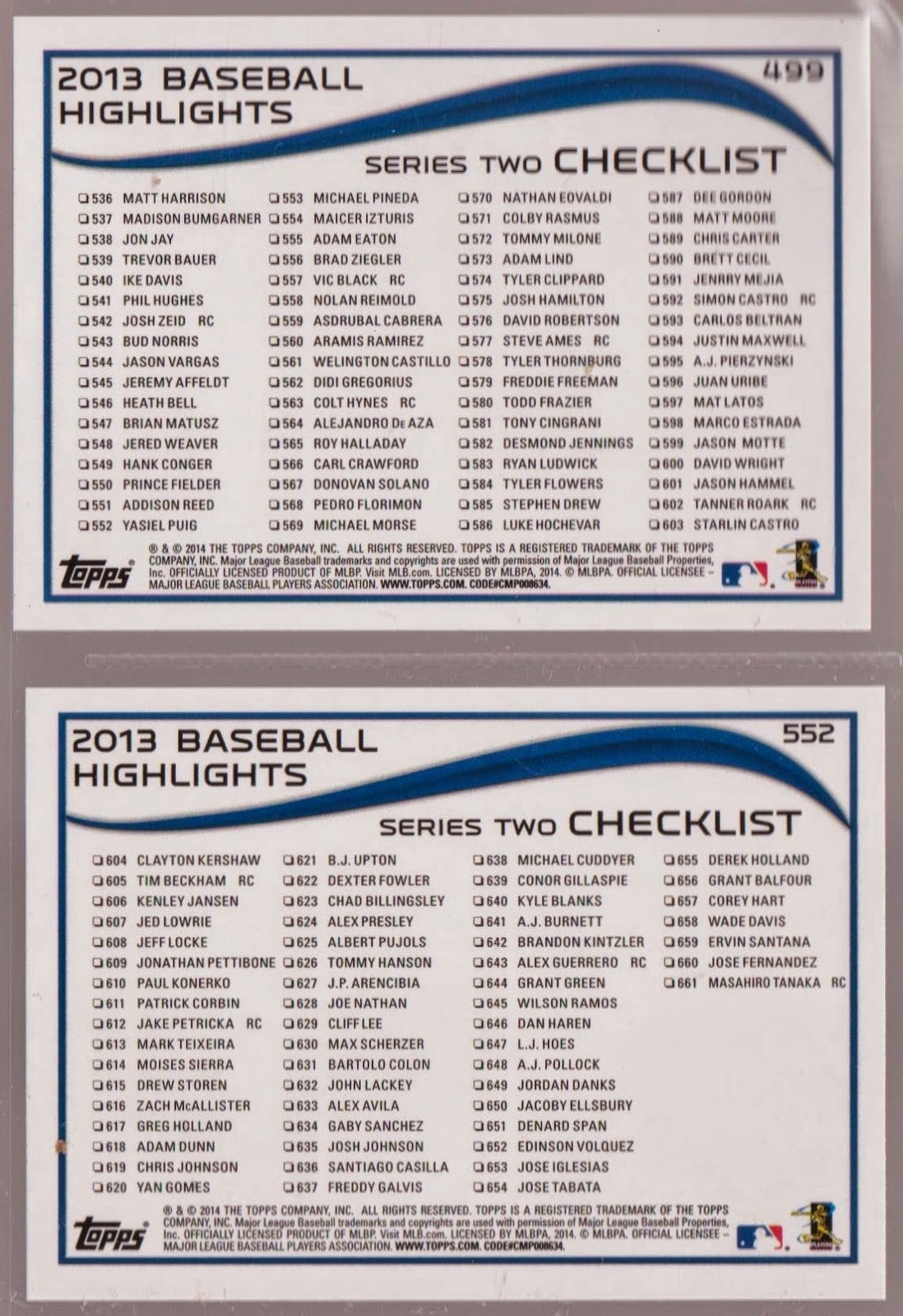 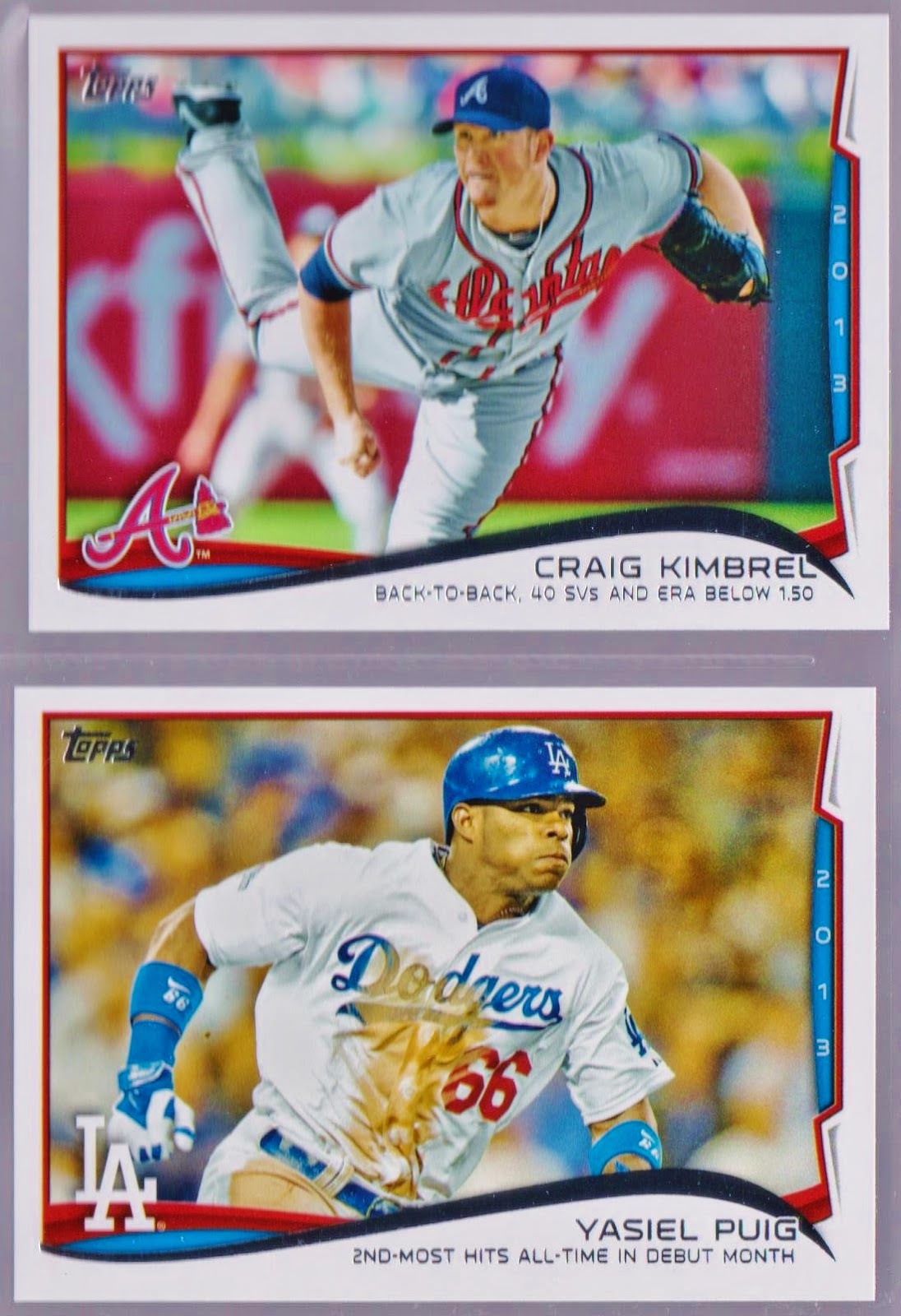 Posted by RoundtheDiamond87 at 10:33 PM No comments:

Email ThisBlogThis!Share to TwitterShare to FacebookShare to Pinterest
Labels: 2014

While moving cross-country from one coast to another, I stopped somewhere in the middle to pick up this year's edition of the Topps baseball card set.  In the store I entered, there was a choice among three different factory sets available for the same price: Blue retail box, Purple Koufax box, or All-Star box.  On August 18th, I purchased the Koufax factory edition: finding the '58T Koufax Chrome Refractor Reprint and the standard 5-card pack of rookie variations inside. ﻿ 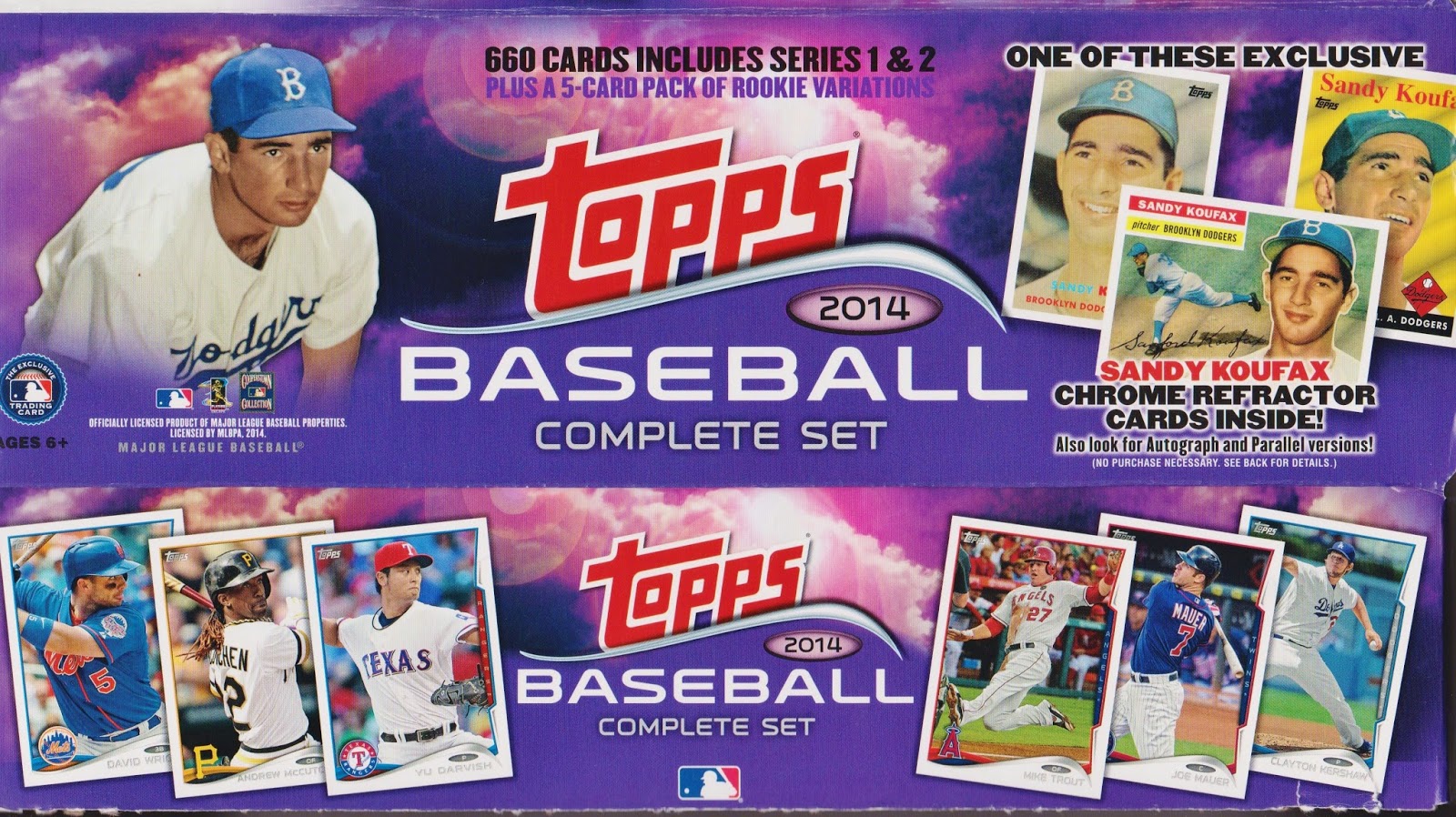 Besides the individual packs of Topps base cards that I purchase of each series every year to collect the wrappers, the factory set acquisition marked the start of my 2014 Topps baseball card collection.  I realize that for most people, the 2014 Topps set is probably old news.  For me, it is all brand new. 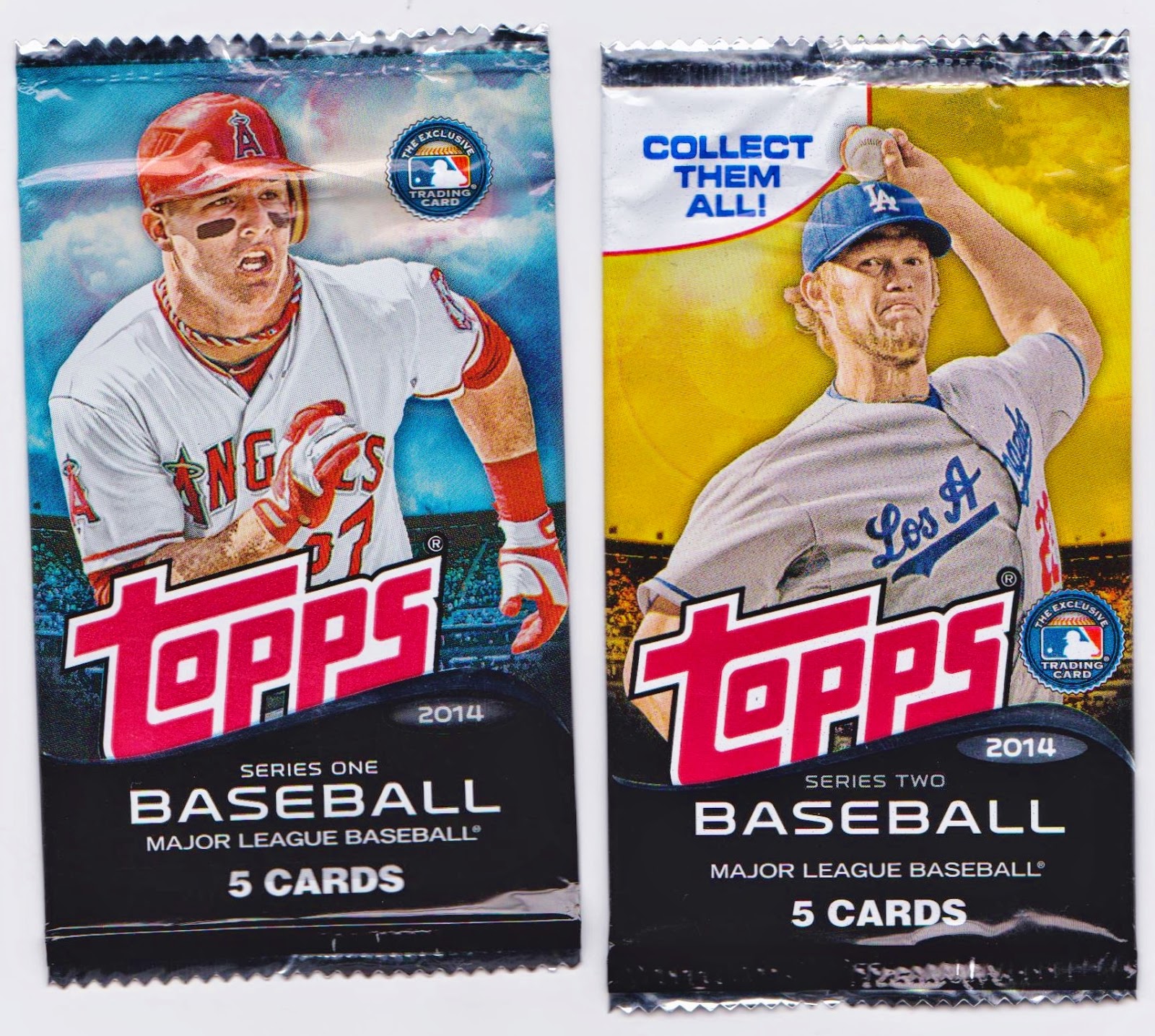 Having initially moved to the Seattle area during the first year that they hosted the All-Star game in 1979, I was probably always destined to become a Mariners fan--especially since we were both born during the same year. 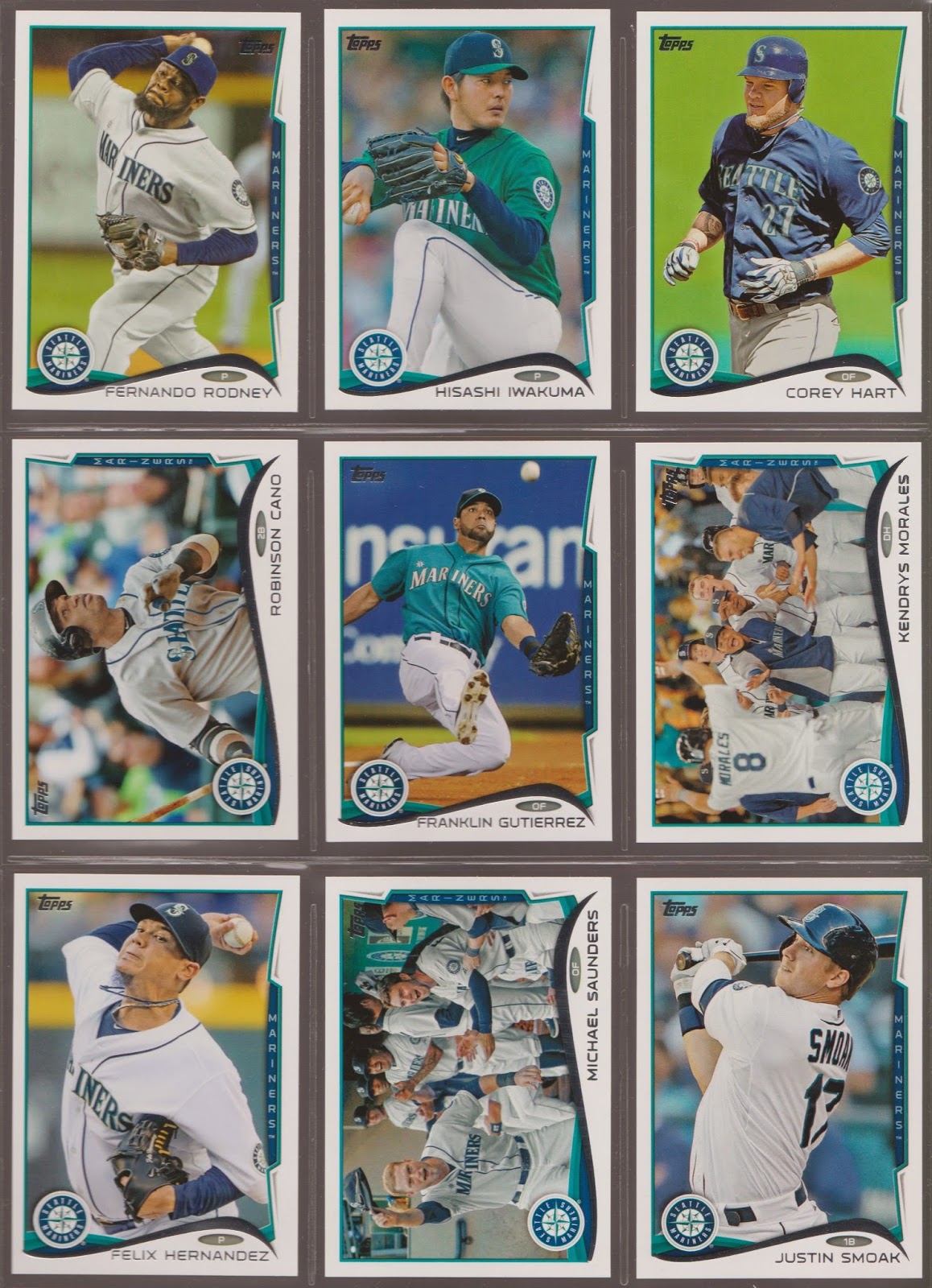 After 30 years of traveling around the country, I may finally be back to the Pacific Northwest area to stay.  That means reacquainting myself with the Mariners team. 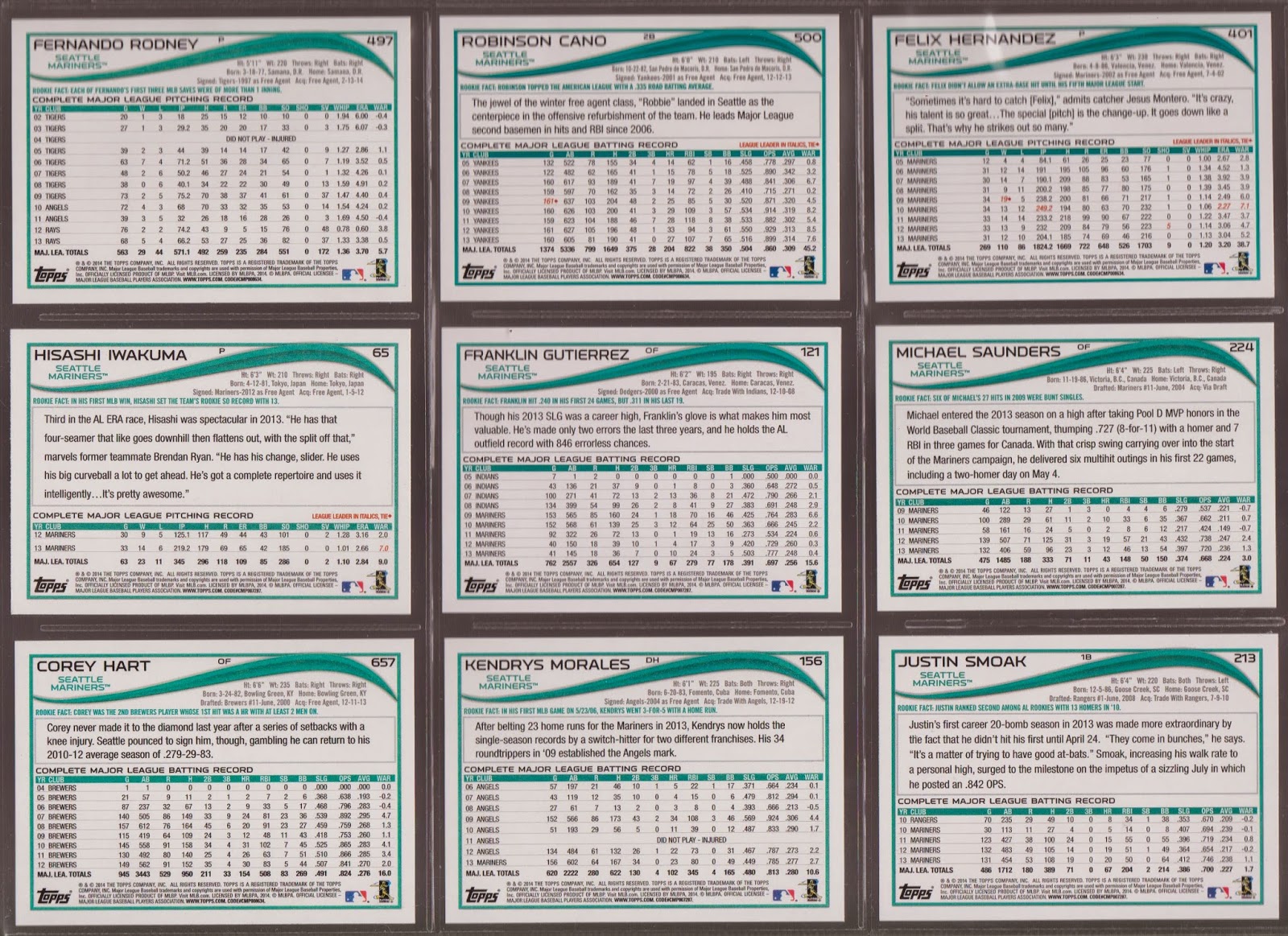 Of course, I was always sure to make a Baltimore Orioles game when the M's were in town, but over the past few years, I had become somewhat of a regular in attendance at the Nationals ballpark.  I'm certainly going to miss watching the Nats as they go into the playoffs this year, but I have also grown accustomed to the painful process of reluctantly having to adopt a new team every time I moved to another part of the country. 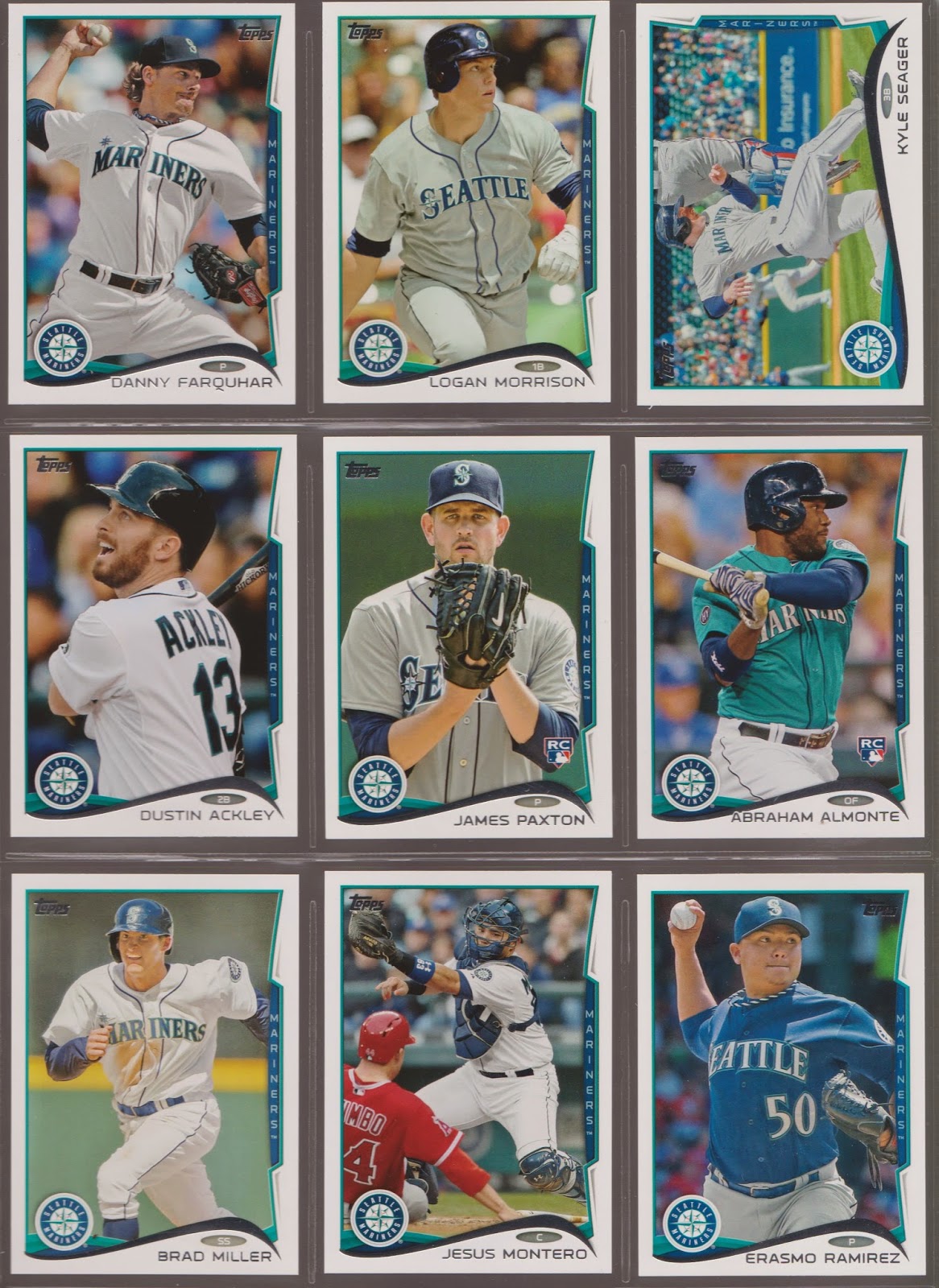 This time, I will do so with open arms.  This is where I'm from.  This is my team. 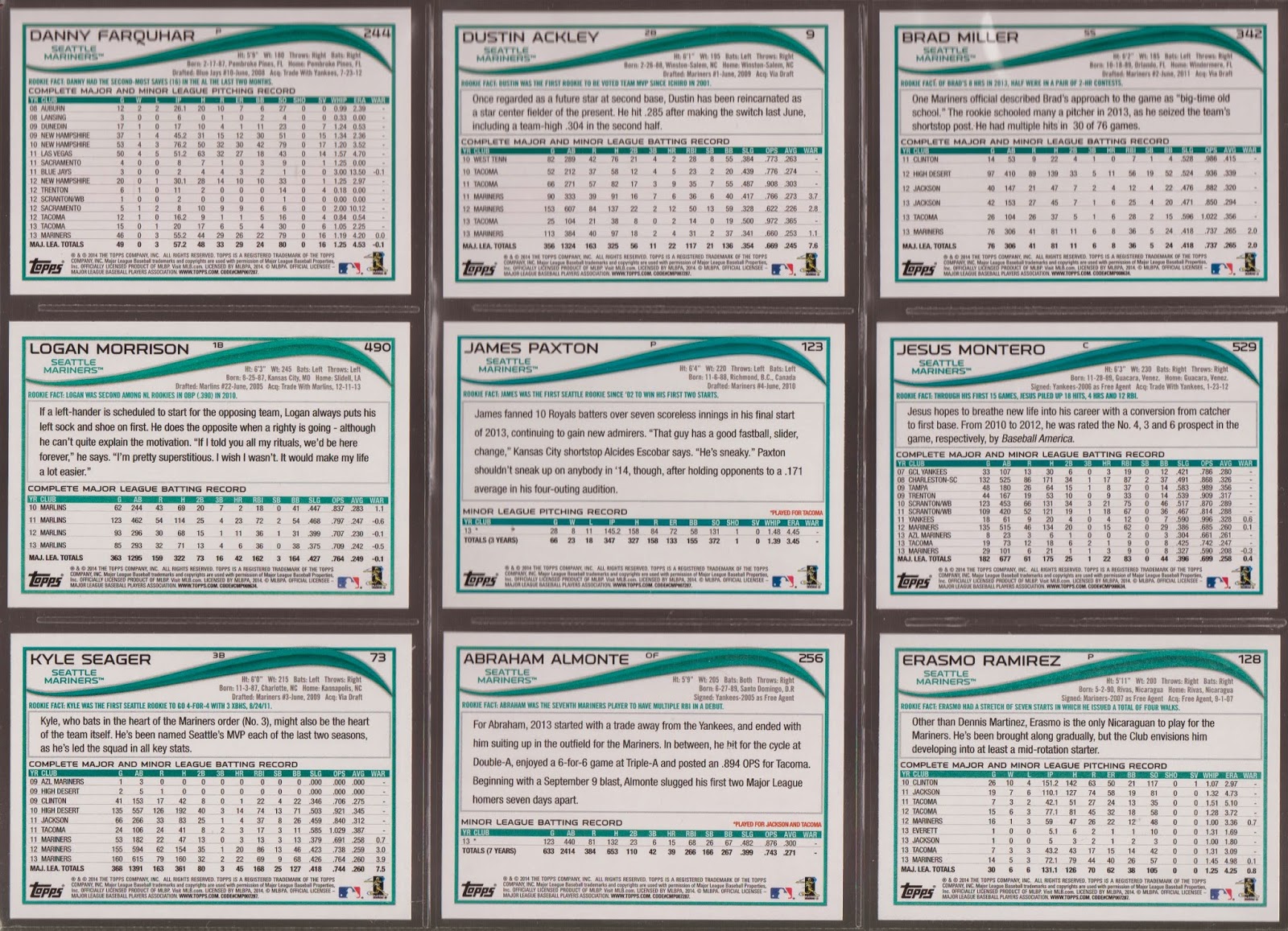 Since the 2014 season is still in progress, organizing my set by team win percentage becomes a difficult task.  This is actually the fun part, since I can place my favorite teams in the front of the binder until they are mathematically eliminated from playoff hopes. 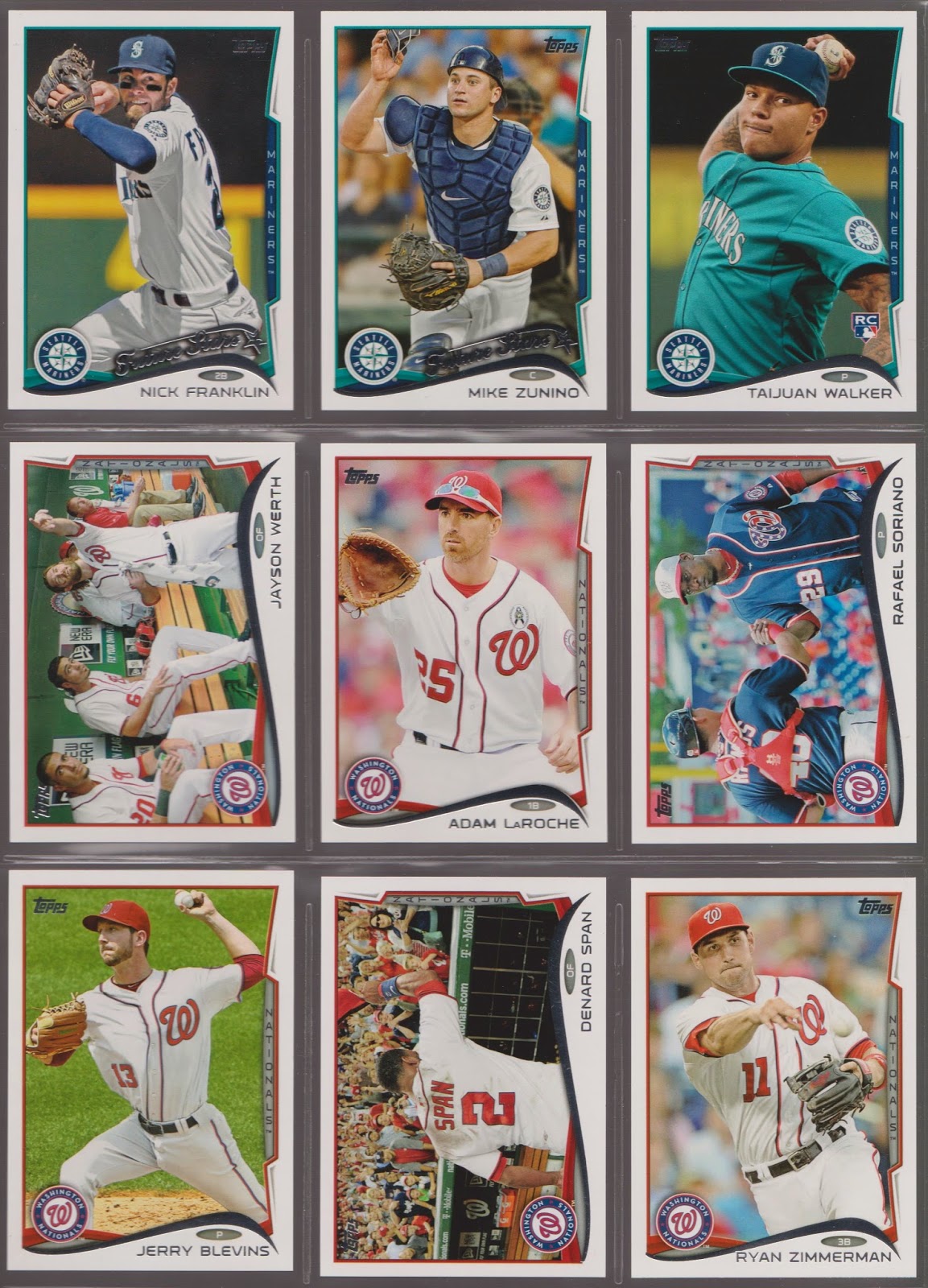 Right now, the front of my binder has the Mariners, Nationals, and Royals.  Deciding between either the Giants or Dodgers next has been difficult. 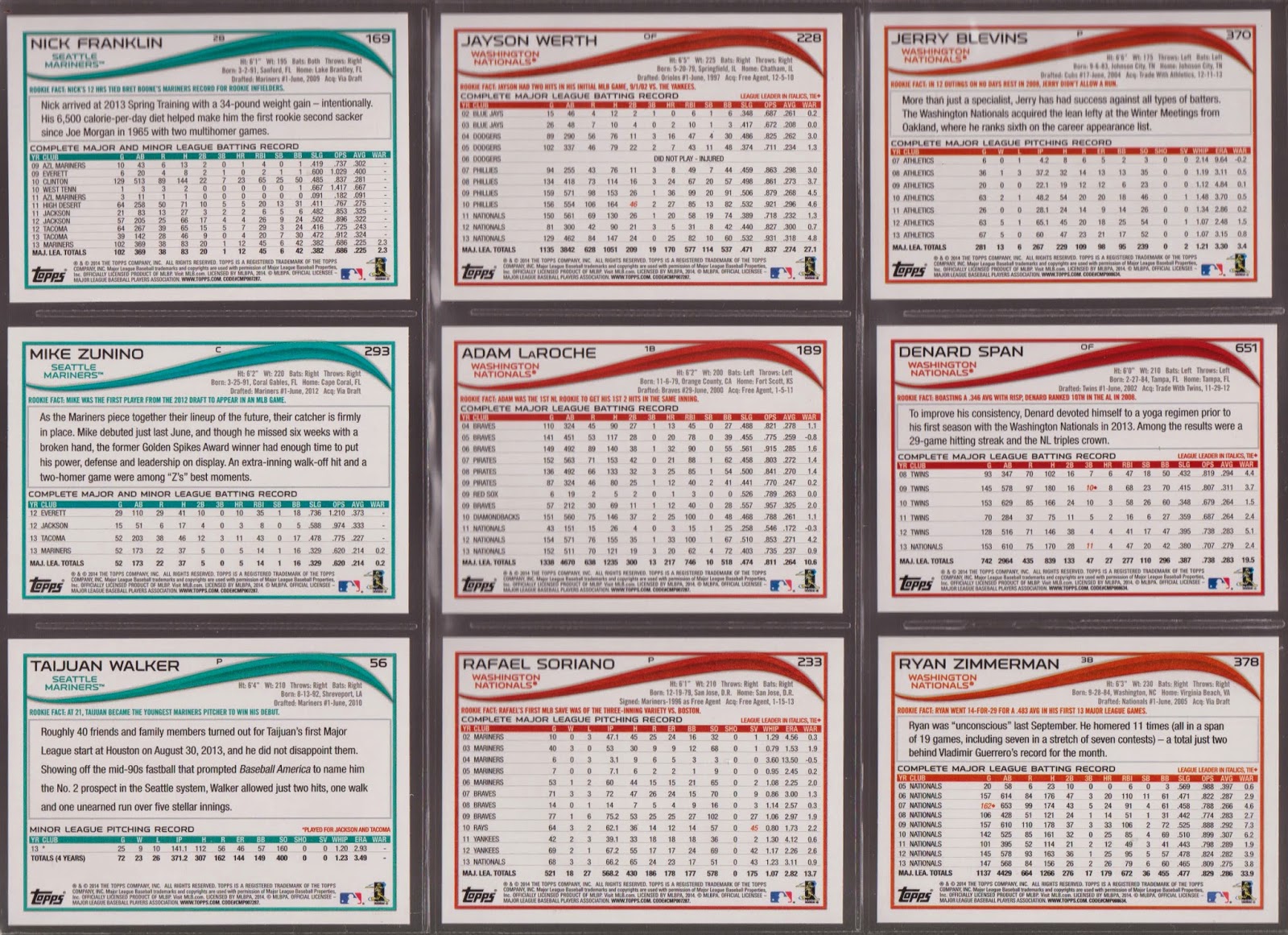 Posted by RoundtheDiamond87 at 12:33 PM No comments: