Fred Hutchinson was born on 8/12/1919 in Seattle, WA.  He began playing for the Tigers in 1939, and pitched a game in the '40 World Series loss against the Reds. bHe spent all of 1941 in the minors, and then the next four years after that serving in the Navy during WWII.  Hutchinson went back to the Tigers in 1946, after missing the '45 World Series championship victory over the Cubs.  He made the All-Star team for the only the in 1951.  The following year, Hutchinson became a player/manager for two seasons before retiring as a player completely after 1953.  He managed the Tigers for one more season through 1954.  In 1956, Hutchinson became manager of the Cardinals for three years, before going to the Reds in 1959.  He led the Reds to the '61 World Series, but lost out to a Yankees team that had just came off of a Babe Ruth record breaking chase between Maris and Mantle.  Hutchinson continued managing the Reds until shortly before his battle with cancer in 1964.  Fred Hutchinson passed away on 11/12/1964 in Bradenton, FL at the age of 45. 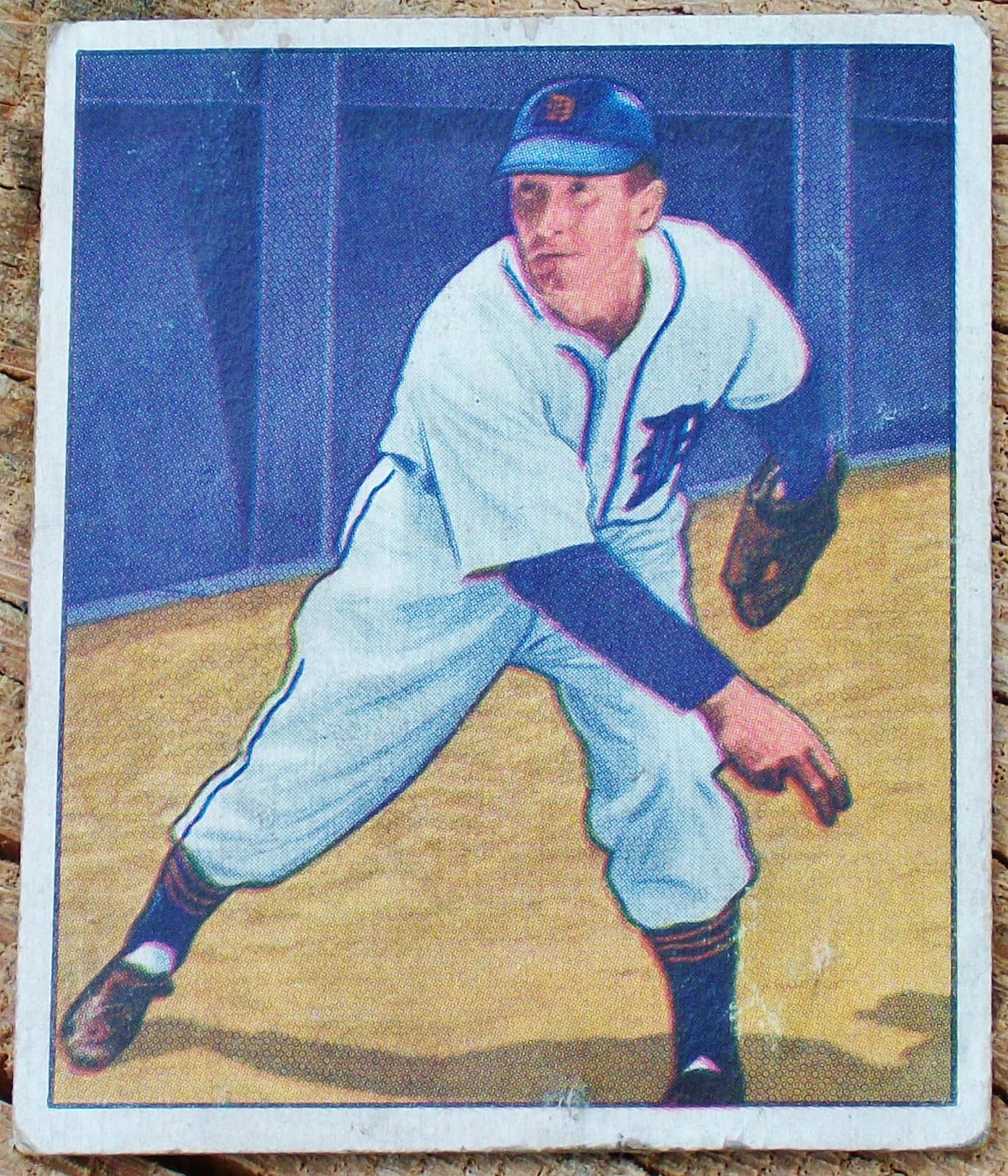 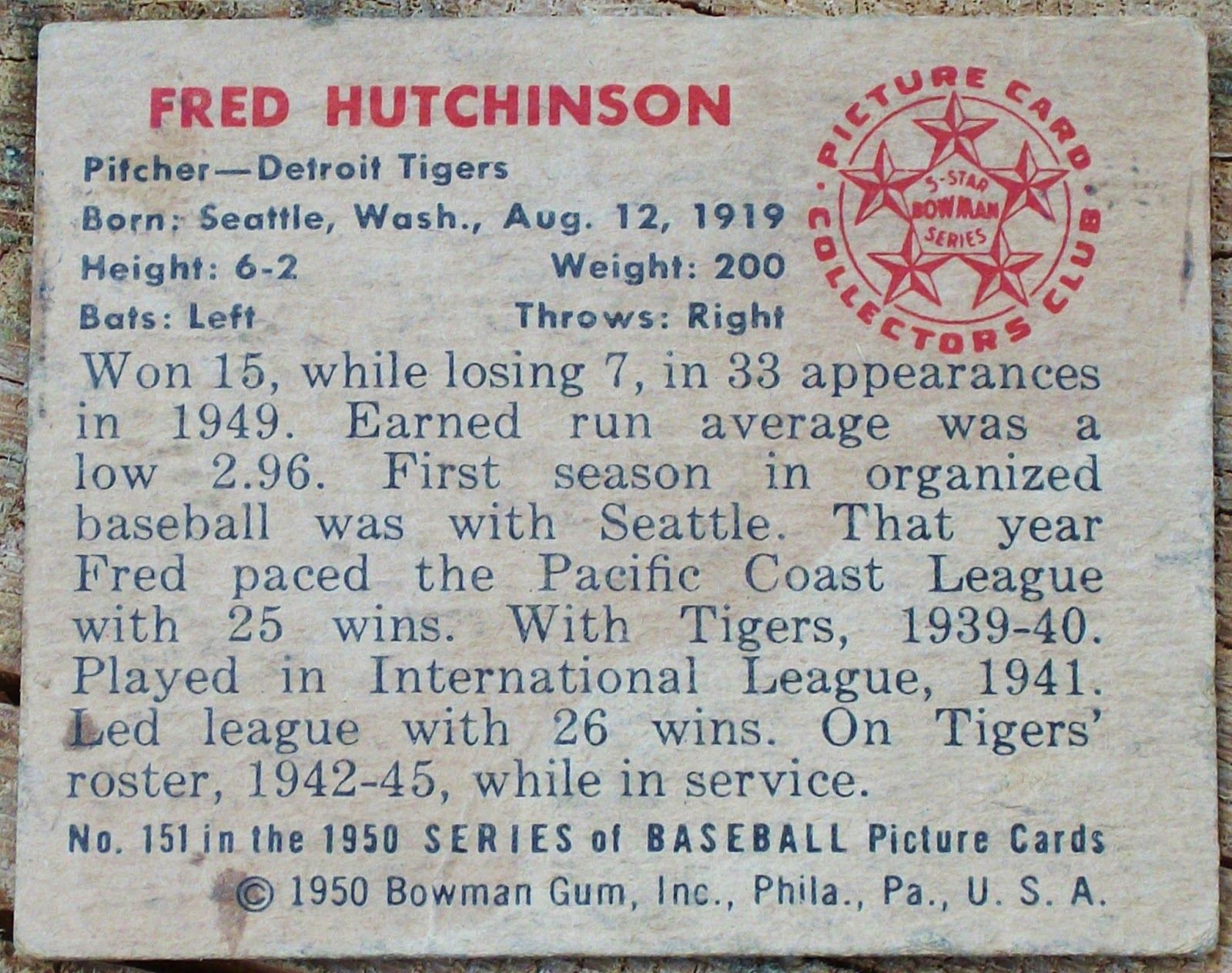 BV: $40 (for semistars)
Cost: $2.25 (paid 5% BV)
Condition: VG 3.0 (worth 30% BV)
Completion: 22 of 252 (8% complete)
Comment:  I chose to list this one as a semistar (subject to change) primarily due to his overall popularity than because of any grand statistic as either a player or manager.  Hutchinson was known for his leadership ability, having earned the rank of LCDR (0-4) by the age of 26 and became a respected player-manager at a very young age.  I don't have a price guide that lists '50 Bowmans individually, so I have to rely on the vague listing criteria in Beckett's monthly magazine.
Posted by RoundtheDiamond87 at 7:29 AM No comments:

Pat Mullin was born on 11/1/1917 in Trotter, PA.  He began playing for the Tigers at the end of 1940, making it to the World Series against the champion Reds, but didn't receive any playing time during that series.  In 1942, Mullin entered the military to serve four years during WWII.  He went back to the Tigers in 1946, and made the All-Star team for two consecutive years between '47 and '48.  Mullin continued playing for the Tigers through the '53 season.  Afterward, he continued to work mostly as a coach in the majors.  Pat Mullin passed away on 8/14/1999 in Brownsville, PA at the age of 81. 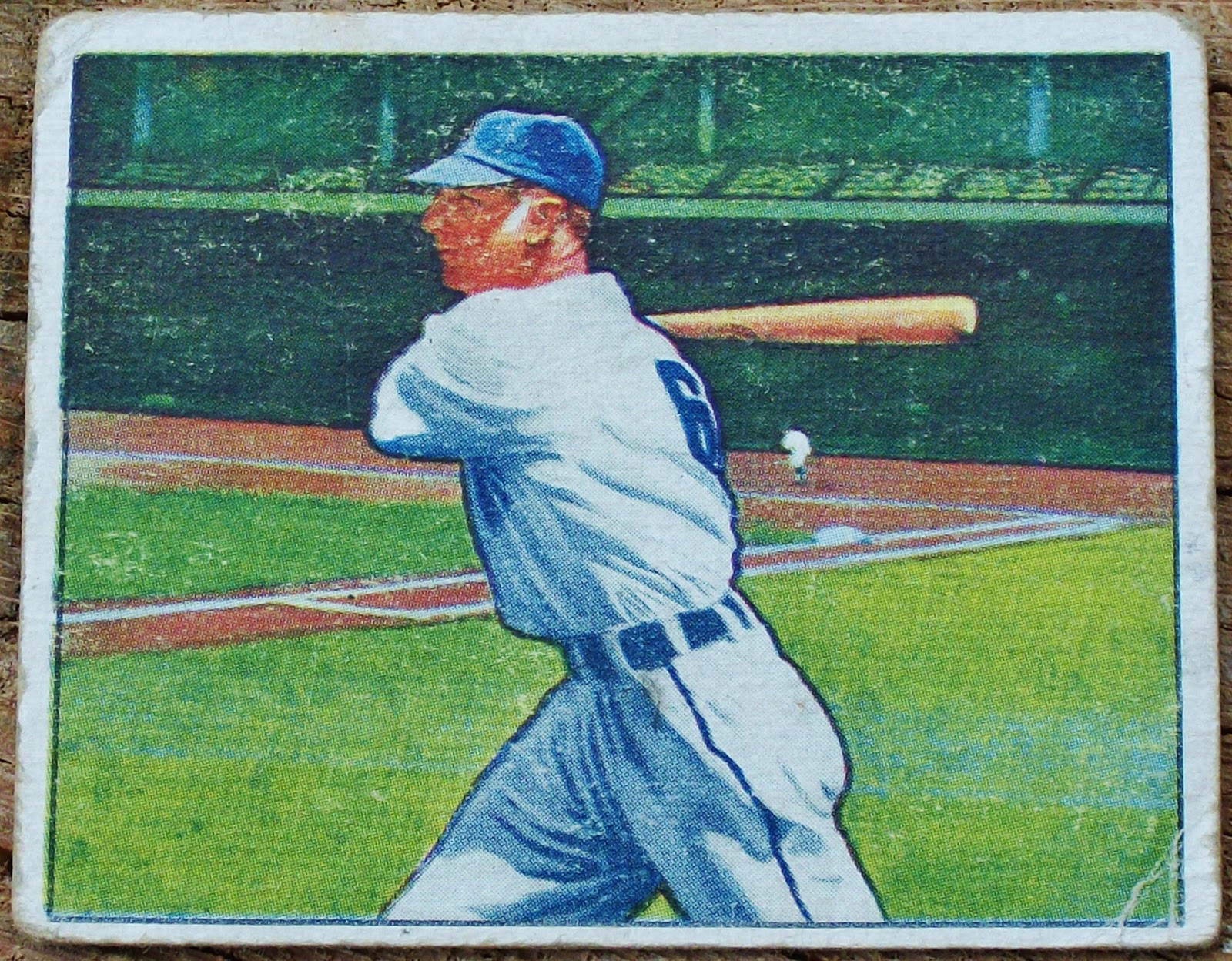 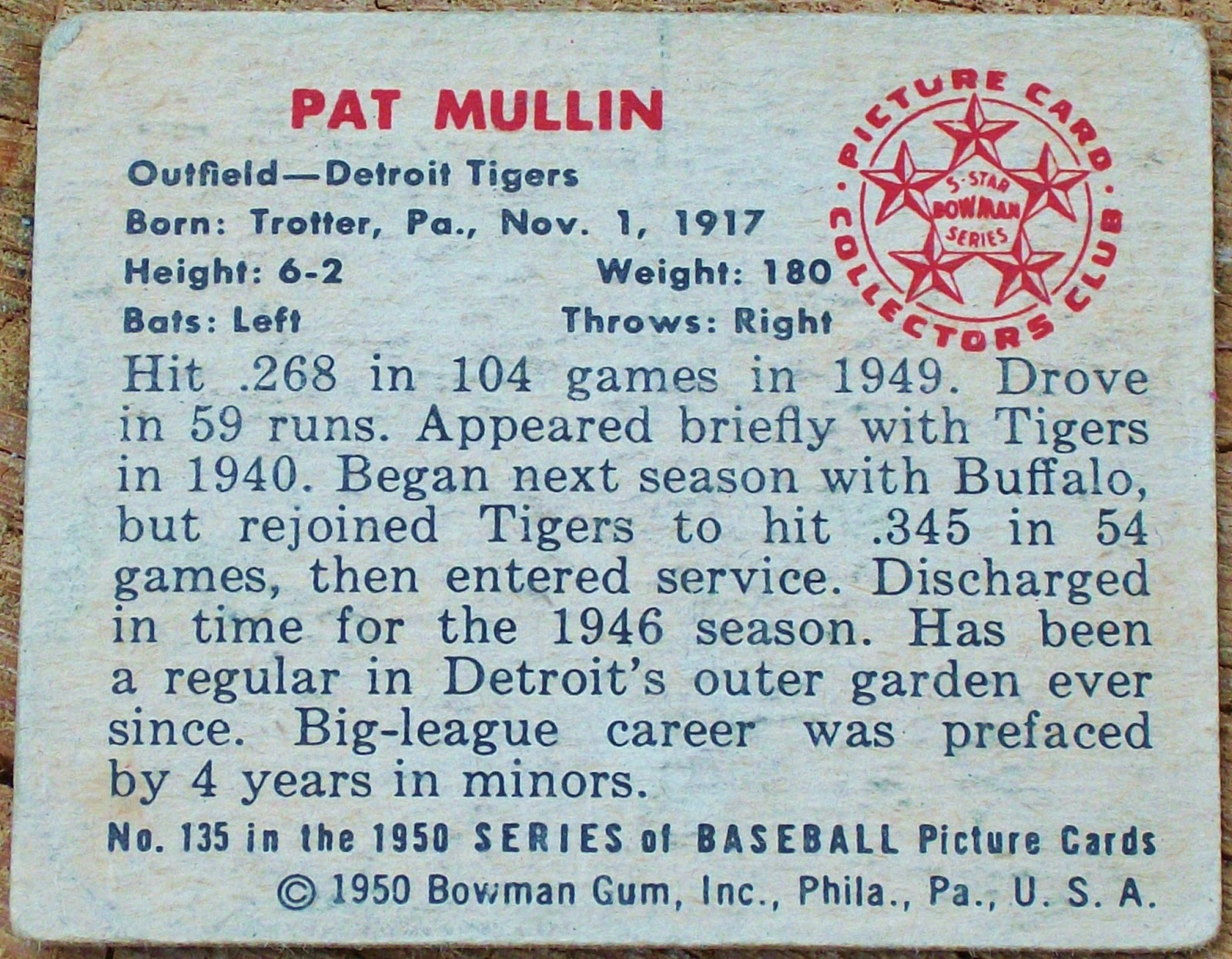 Dale Mitchell was born on 8/23/1921 in Colony, OK.  He began playing for the Indians almost immediately after graduating from the University of Oklahoma in 1946.  Mitchell had a major impact on the success of the '48 World Series champions, having led the league in Singles, placing second in Hits, and placing third in Batting Average that year.  In 1949, Mitchell made the All-Star team for the first time, leading the league in Hits, Singles, and Triples.  Defensively, he led the league in Fielding % as an OF in both '48 and '49, and remained in the top three for LF during the next three years through 1952.  Mitchell made the All-Star team for the second time in '52, ranking second in the league for Batting Average.  In 1954, he also made it to the World Series for the second time with the Indians, eventually losing out to the NY Giants.  In 1956, Mitchell was traded to the Dodgers where he finished out his career making the World Series for the third time against the Yankees.  Dale Mitchell passed away on 1/5/1987 in Tulsa, OK at the age of 65. 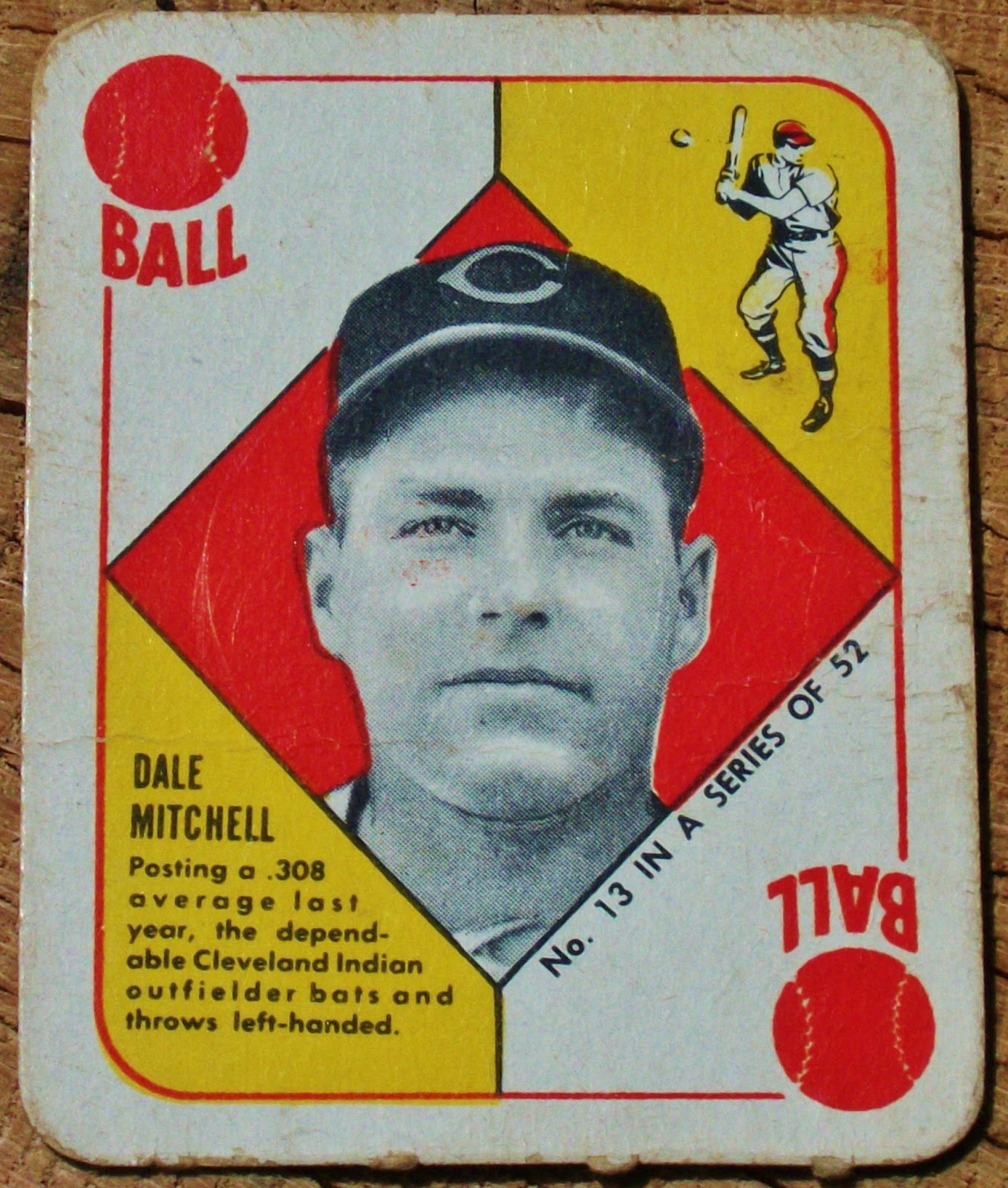 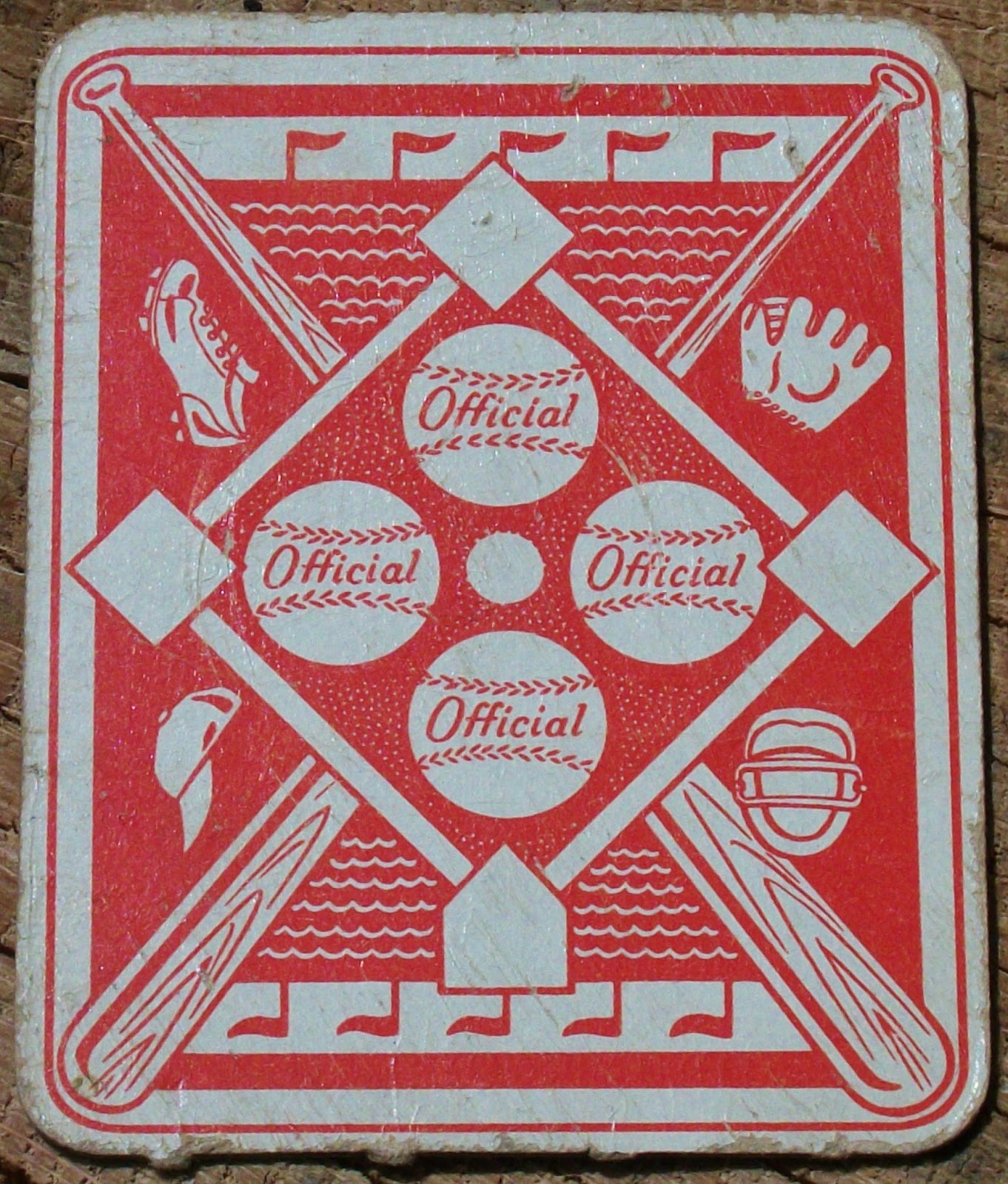 BV: $15 (for semistars)
Cost: $3.01 (paid 20% BV)
Conditon: G-VG 2.5 (worth 20% BV)
Completion: 19 of 104 (18% complete)
Comment:  In my earlier postings for this set, I mentioned that these cards may have been undervalued according to Beckett.  A quick comparison between my recent '50 Bowman and '51 Topps acquisitions shows that obtaining '51 Topps cards are more difficult that initially anticipated.  Although similar values are listed for common cards of both sets, I was able to obtain 118 different '51 Bowmans in roughly the same amount of time it took me to obtain 19 different '51 Topps cards.  '51 Topps cards are not being sold according to Beckett pricing standards.  To date, this post exhausts my collection of '51s.  I still have many more '50 Bowmans to post as time permits.  I will continue to purchase '51 Topps as I find them for roughly under 20% BV.
Posted by ToppsBawlyn87 at 3:47 PM 1 comment: 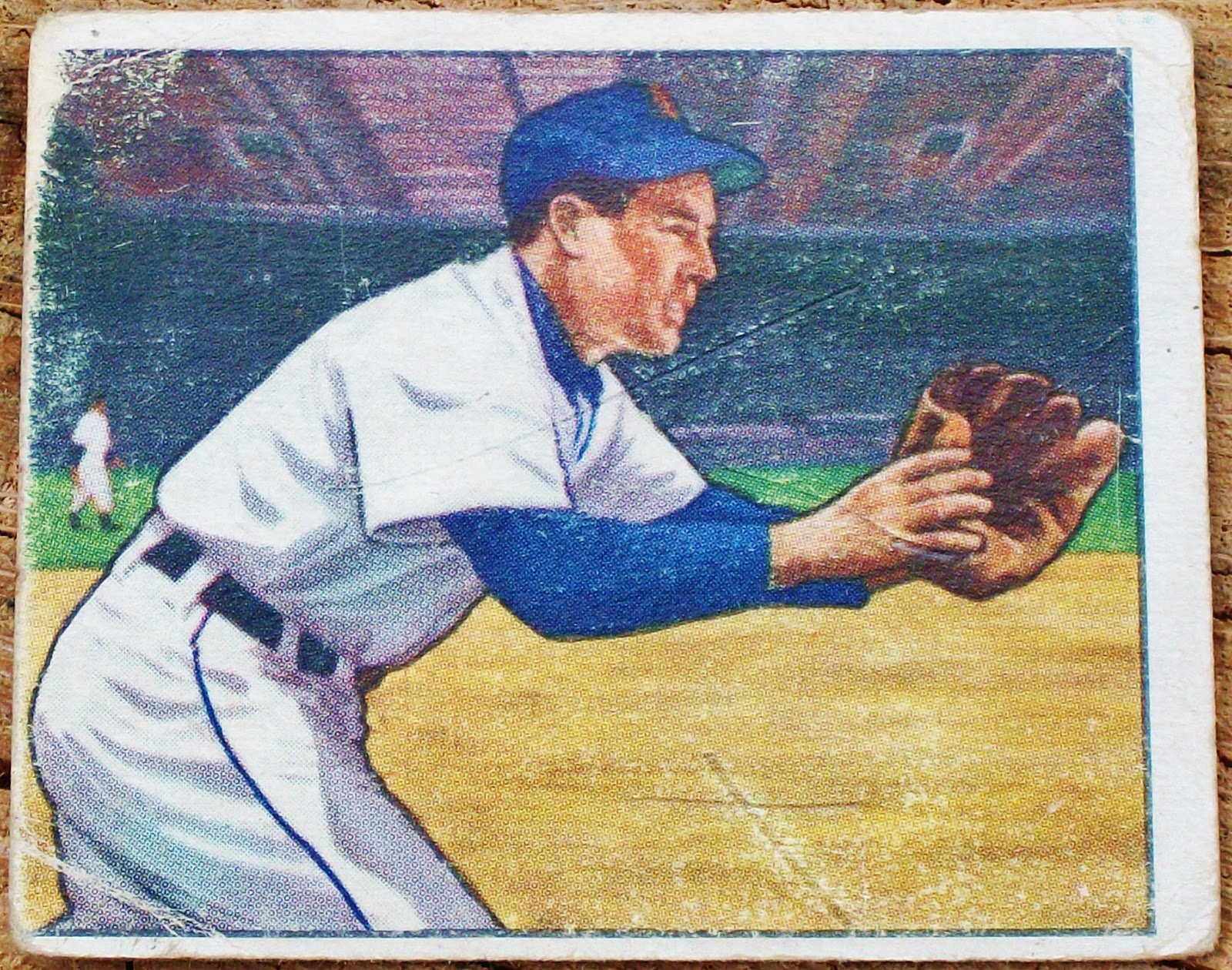 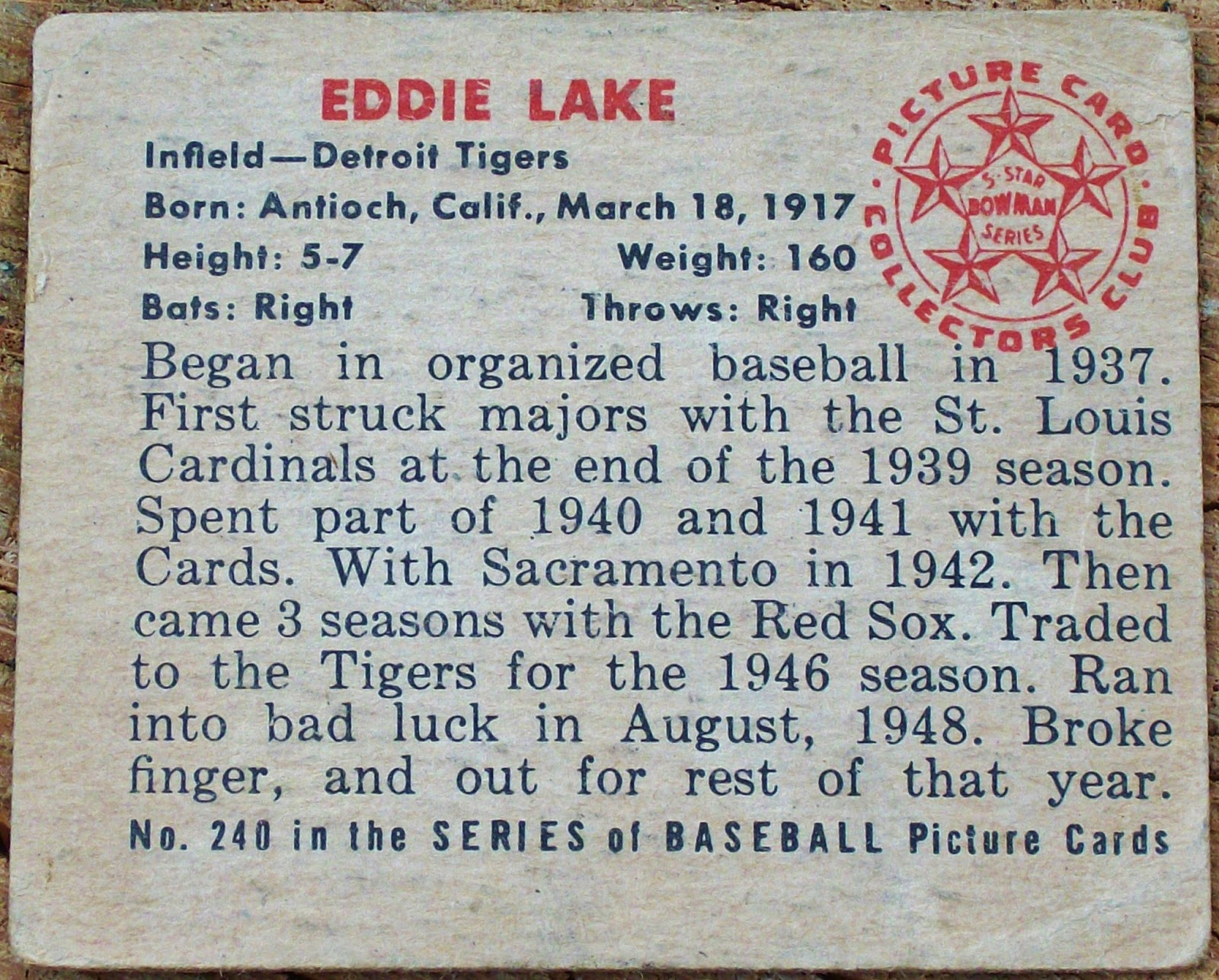 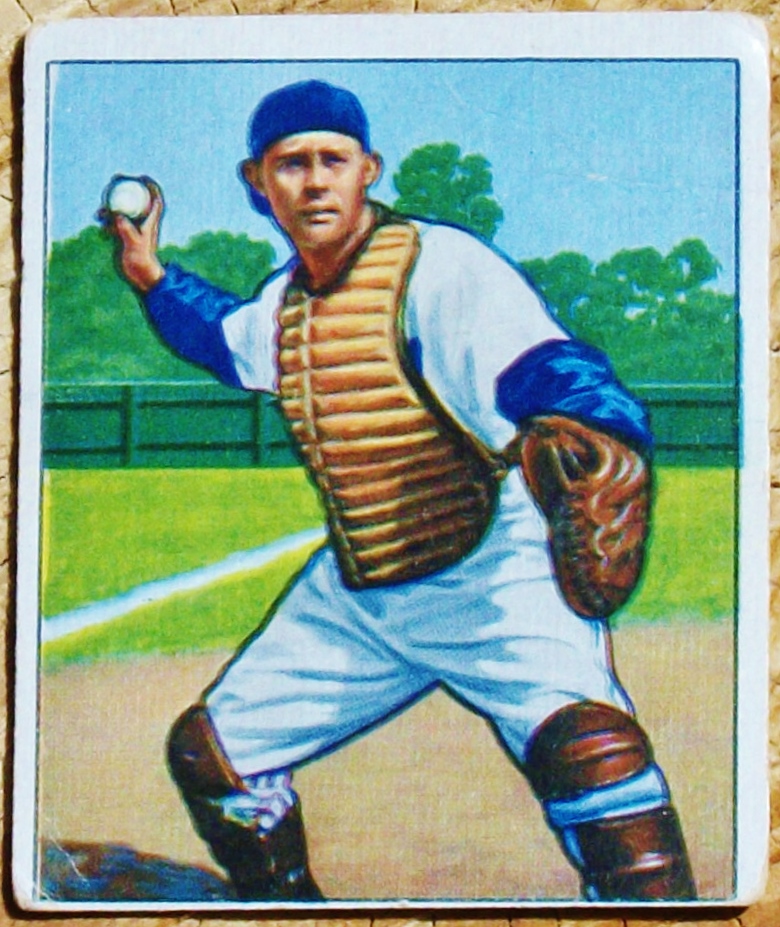 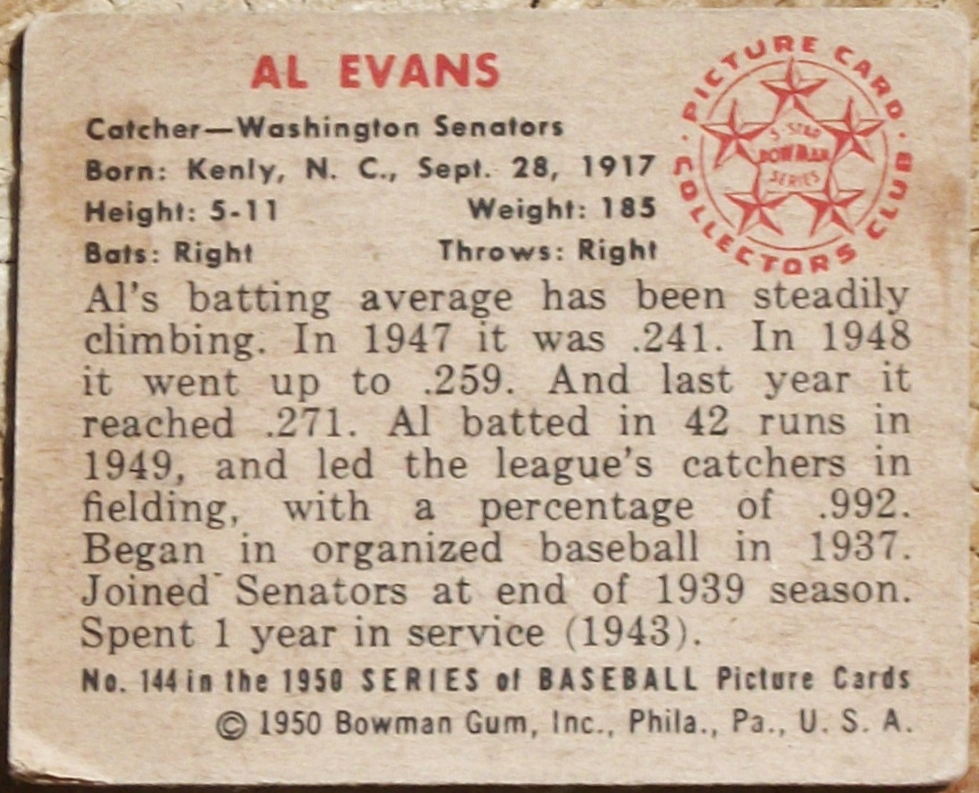 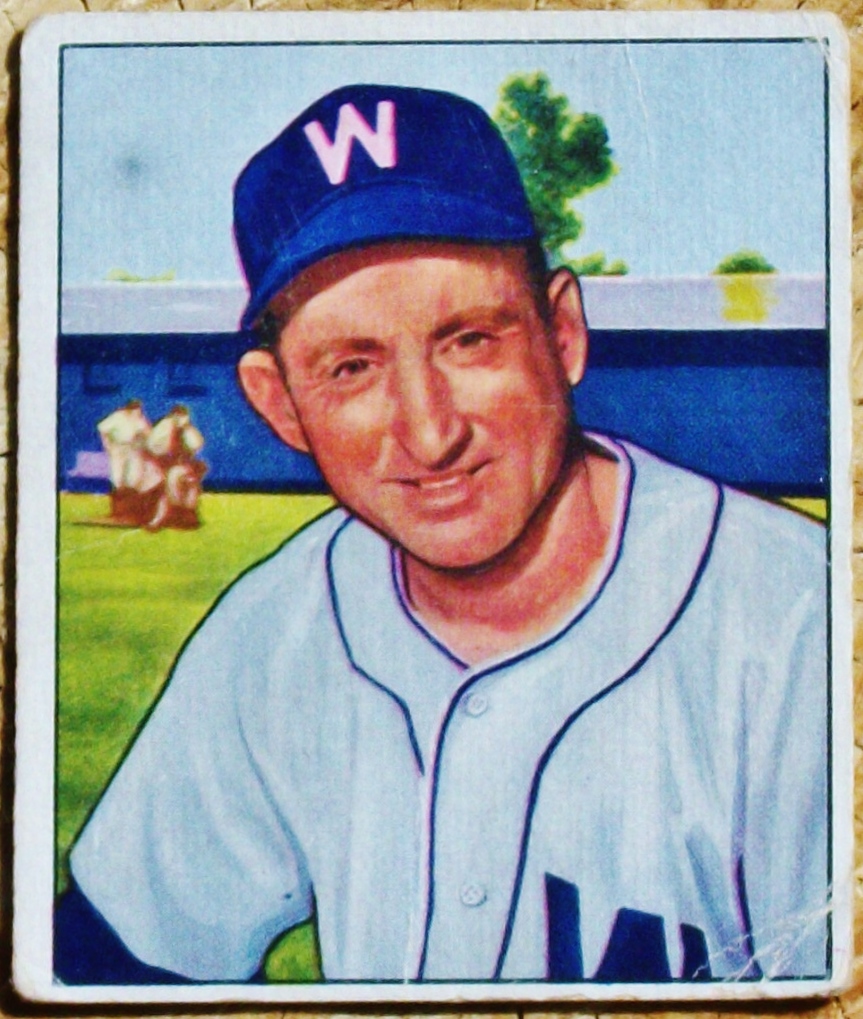 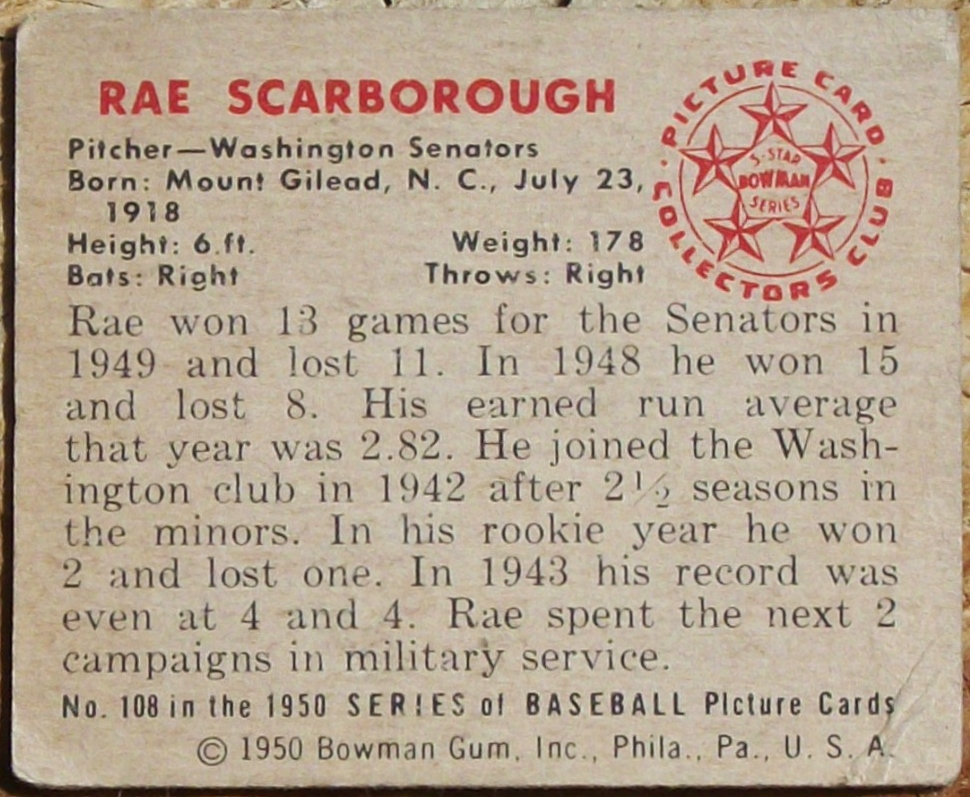