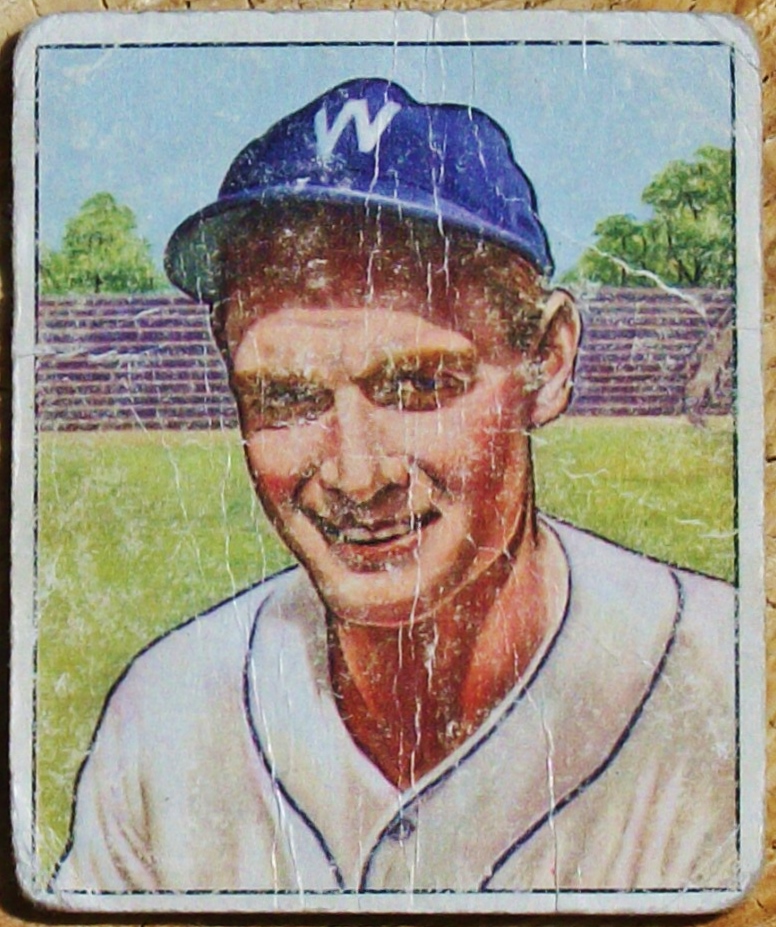 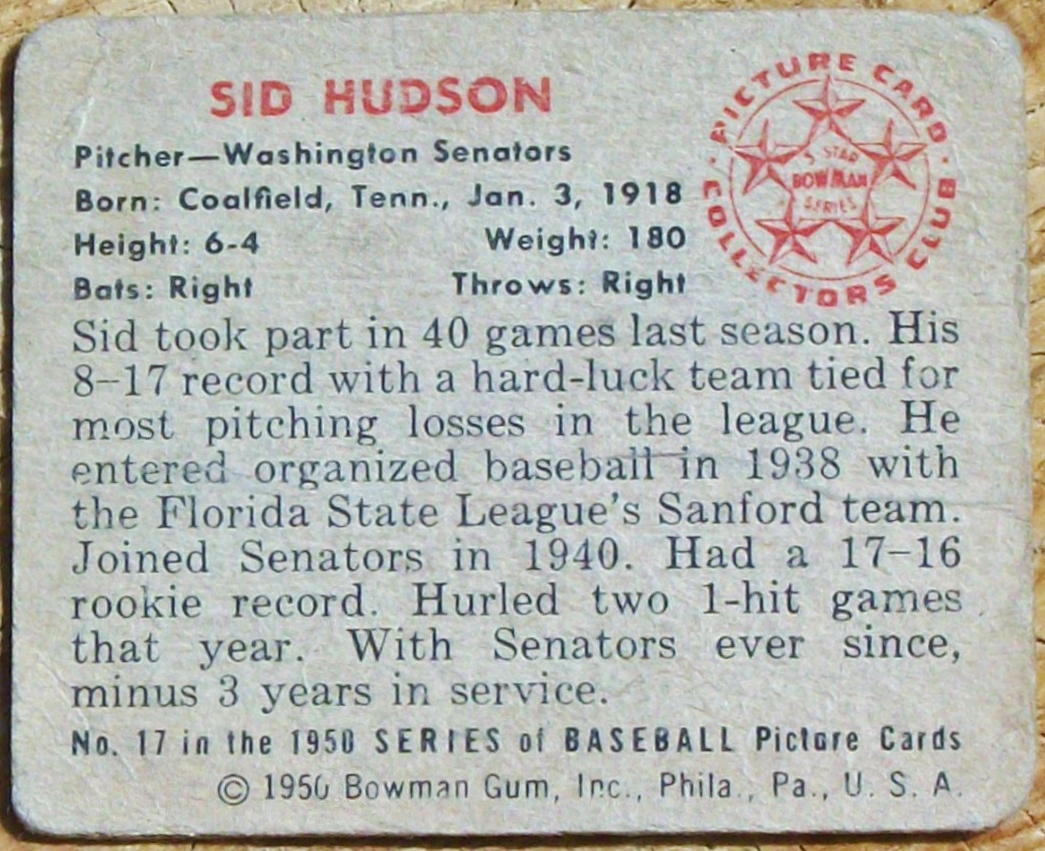 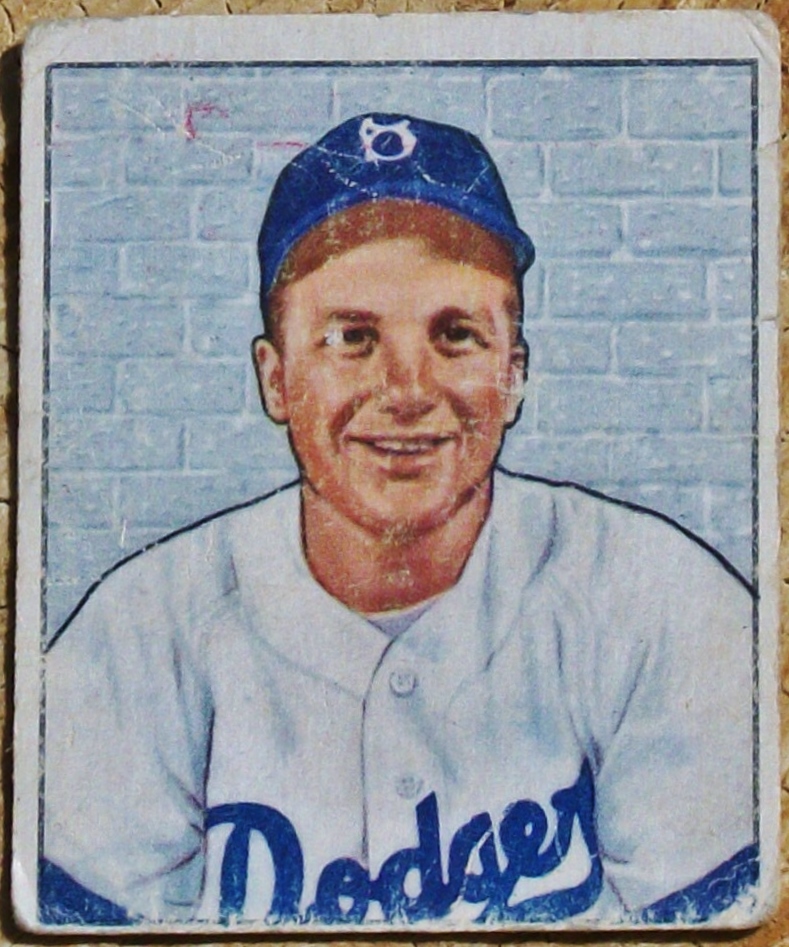 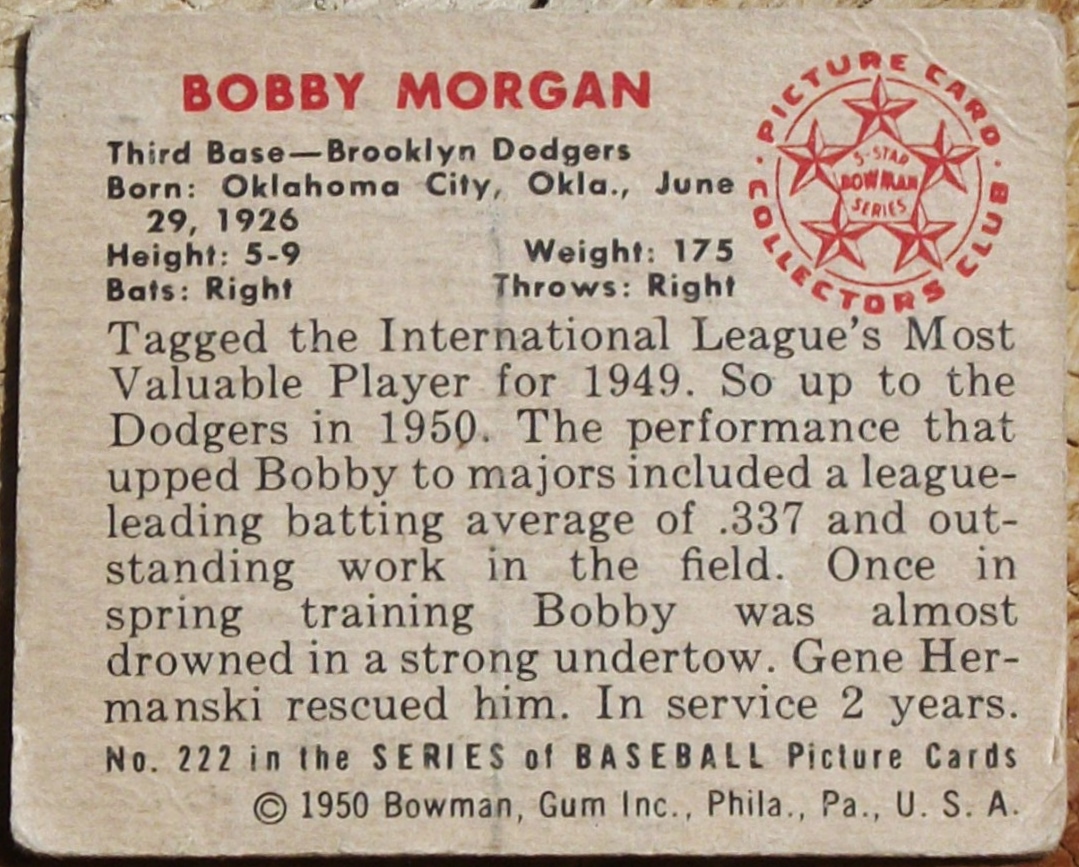 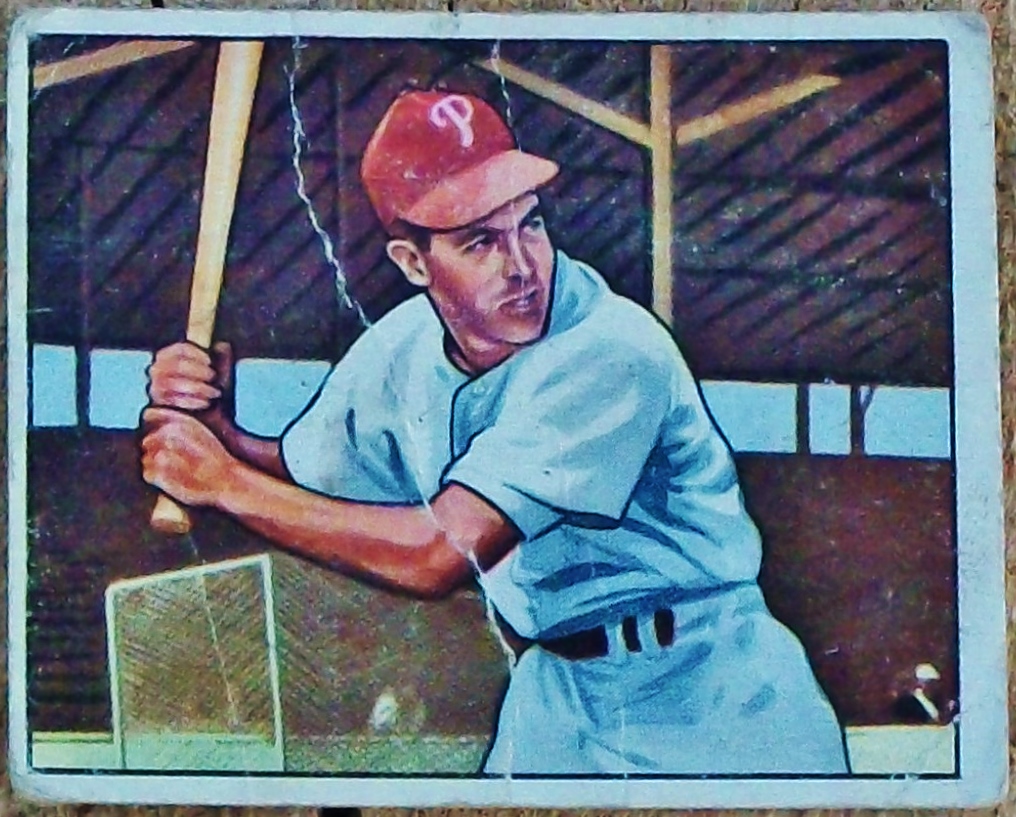 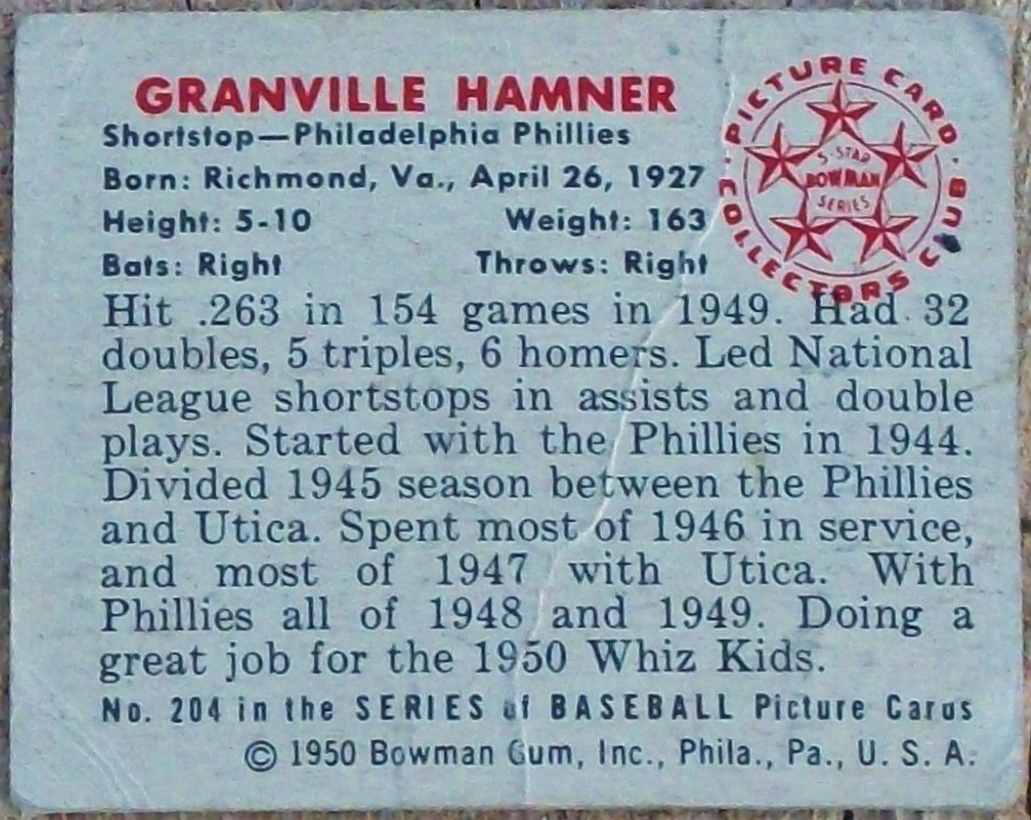 BV: $15 (for commons)
Cost: $3.00 (paid 20% BV)
Condition: FR 1.5 (worth 10% BV)
Completion: 15 of 252 (5% complete)
Comment:  Here's a post of one of the 1950 World Series contending Whiz Kids.  I've been a little slow about writing the player descriptions lately due to the beginning of the baseball season.  Keep looking back for updates to the missing player descriptions.
Posted by RoundtheDiamond87 at 4:06 PM No comments: 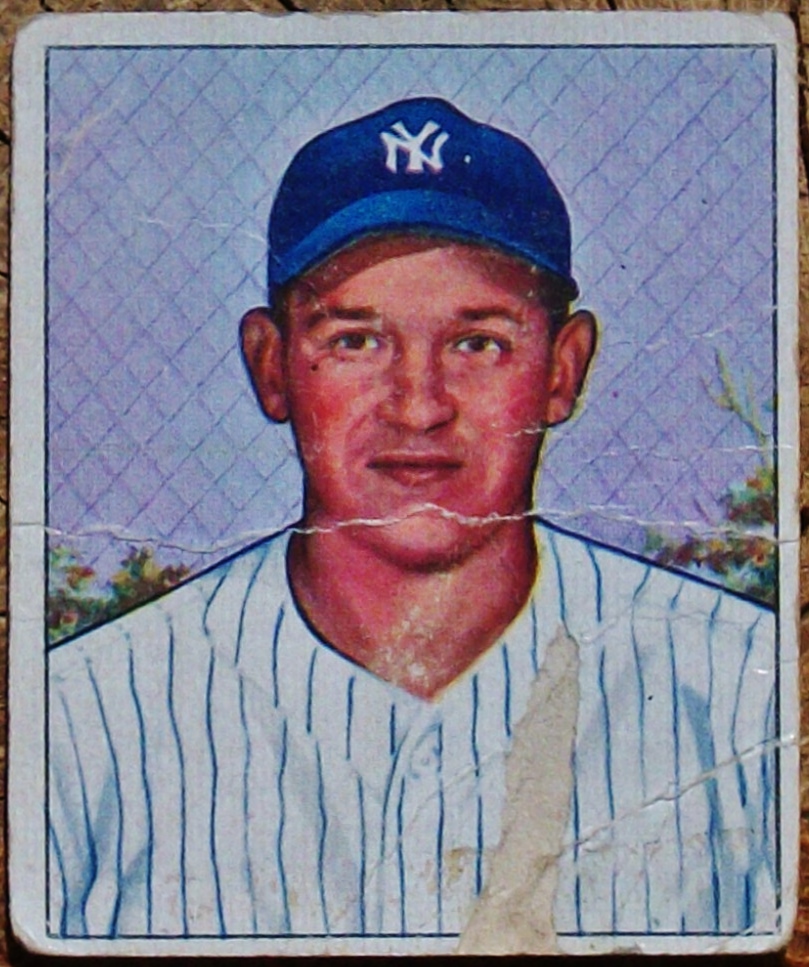 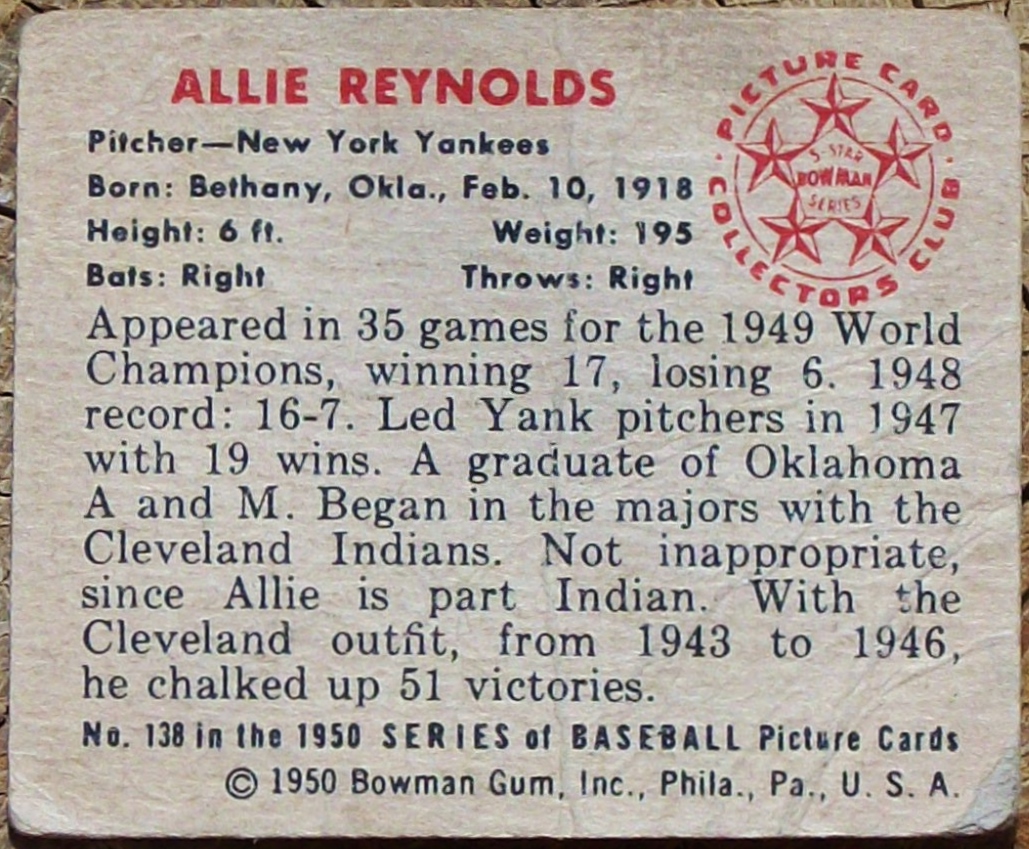 BV: $60 (listed star)
Cost: $4.92 (paid 8% BV)
Condition: PR 1.0 (worth 5% BV)
Completion: 14 of 252 (5% complete)
Comment:  The paper loss on the front of this card makes it a borderline collectible for me.  The rip is a little distracting, but is still acceptable since the damage is contained completely within the uniform pinstripes.  I would have preferred to pay only $3-$4 for a card like this, but a '50 Reynolds card for under 10% BV in any condition still seems to be difficult to find.  This one had been listed online for sale quite a while before I decided to pick it up, which probably means I overpaid.
Posted by RoundtheDiamond87 at 4:52 PM No comments: 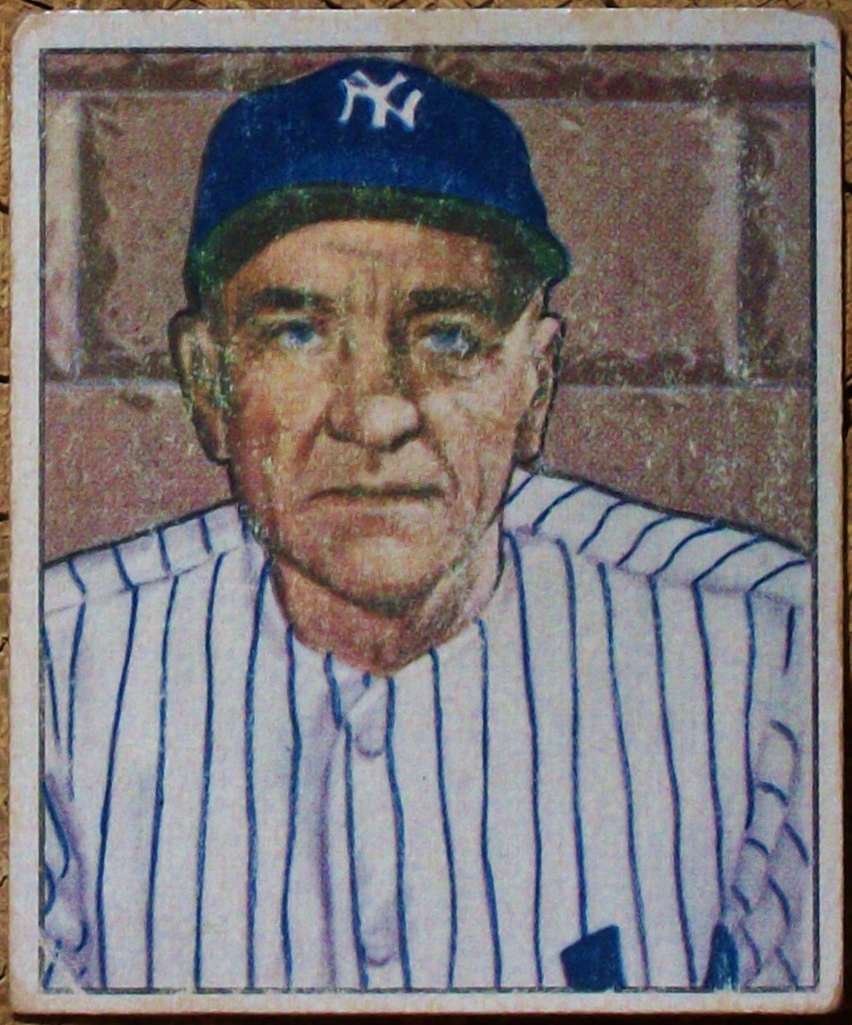 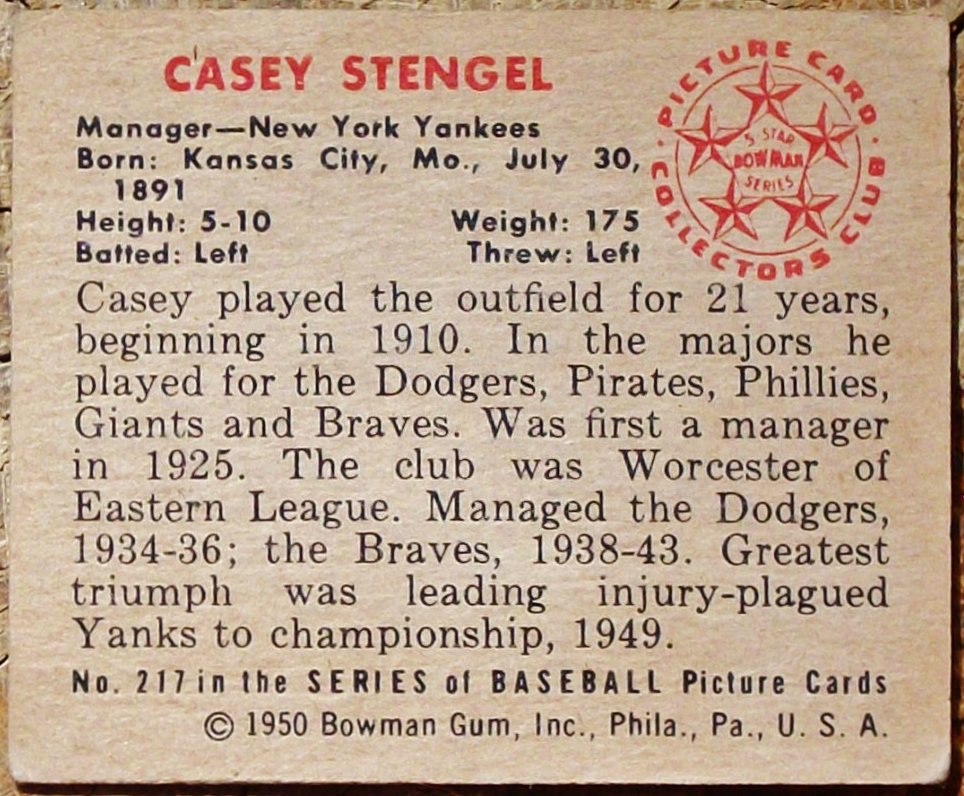 Elmer Valo was born on 3/5/1921 in Rybnik, Czechoslovakia.  Valo began playing for the Philadelphia Athletics in 1940.  He missed two years to served in the military during WWII in '44 and '45, but was back with the A's in '46.  Valo remained with the A's during their move from Philadelphia in 1954 to Kansas City in 1955.  In 1957, Valo was traded to the Dodgers during their final year in Brooklyn and moved to Los Angeles with the team the following year.  He was traded to the Indians in 1959, and then to the Yankees in 1960.  That same year, Valo was also traded to the Washington Senators before moving with the team to Minnesota in 1961, where the team would change their name to the Twins.  Later that same year, Valo would finish out his major league playing career after being traded to the Phillies.  Elmer Valo passed away on 7/19/1998 in Palmerton, PA at the age of 77. 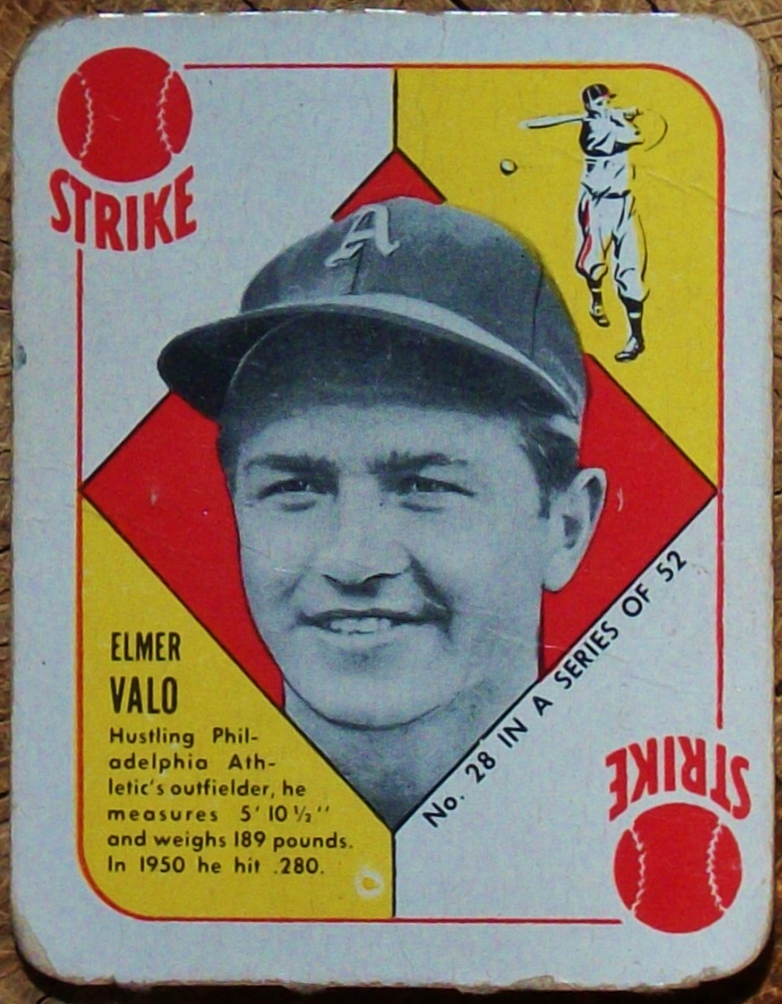 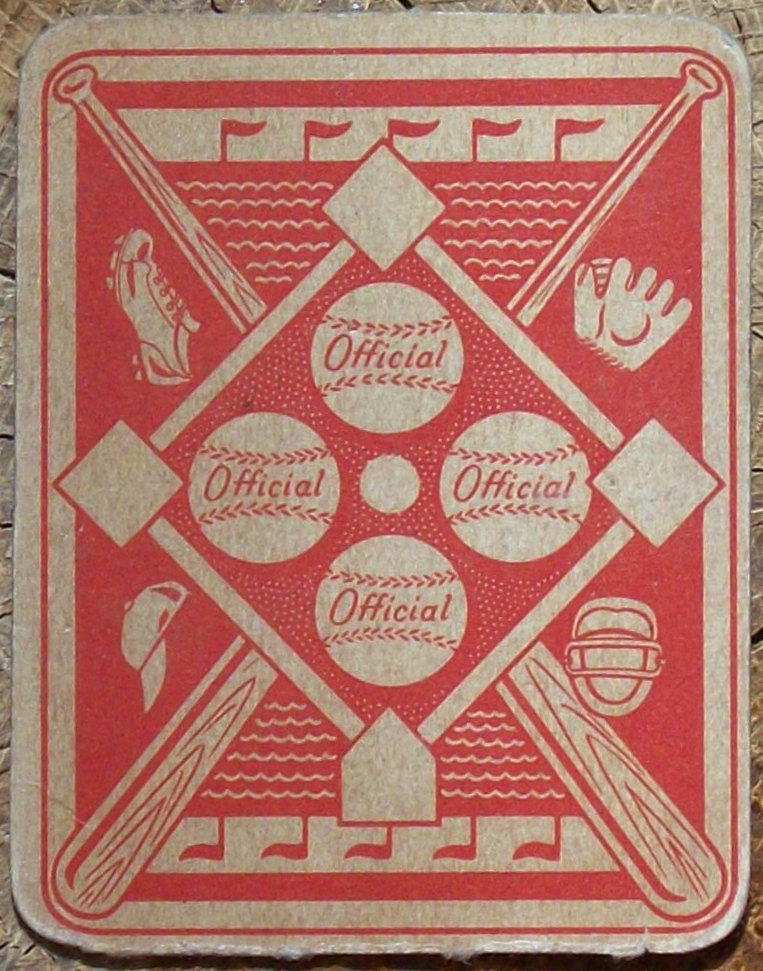 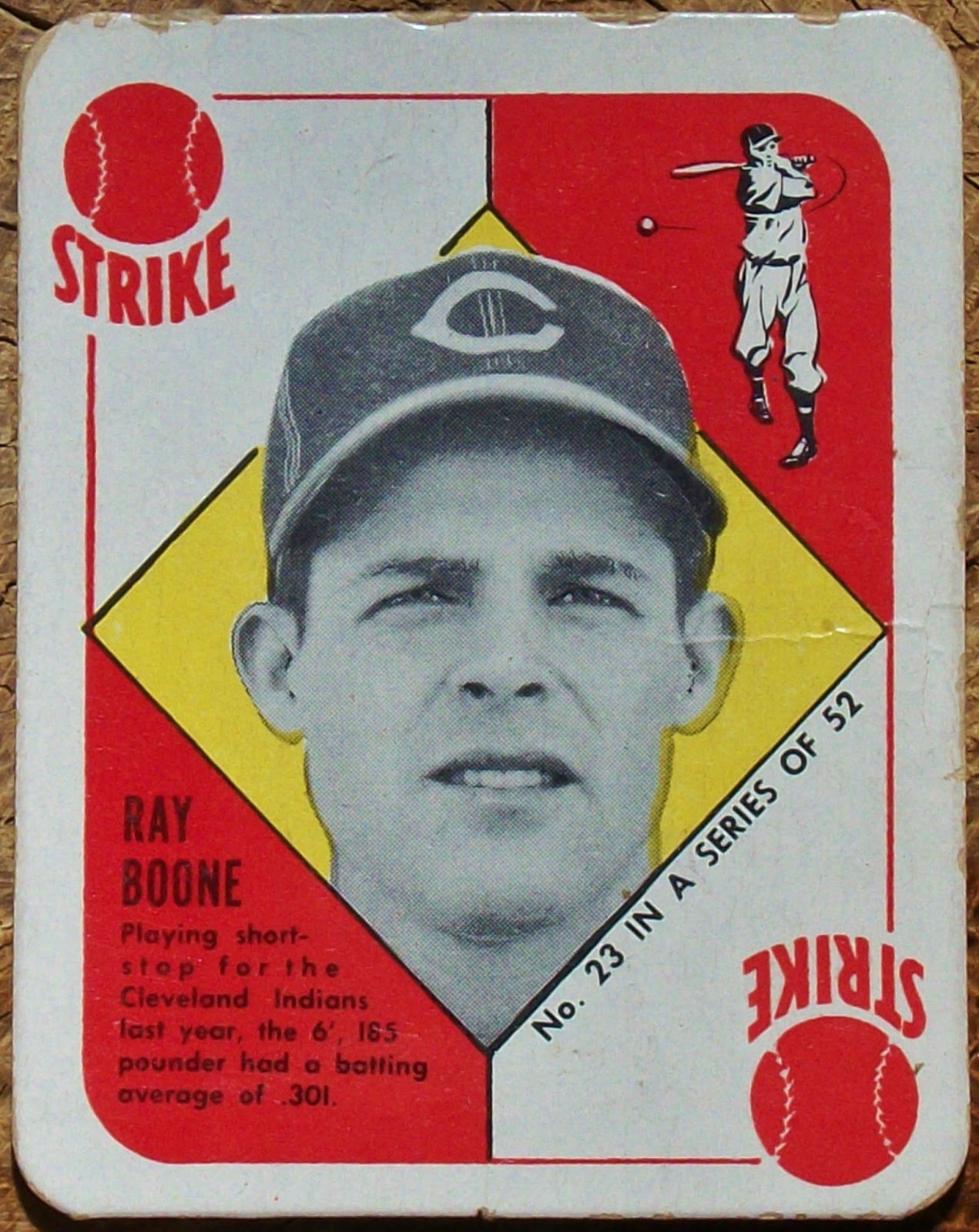 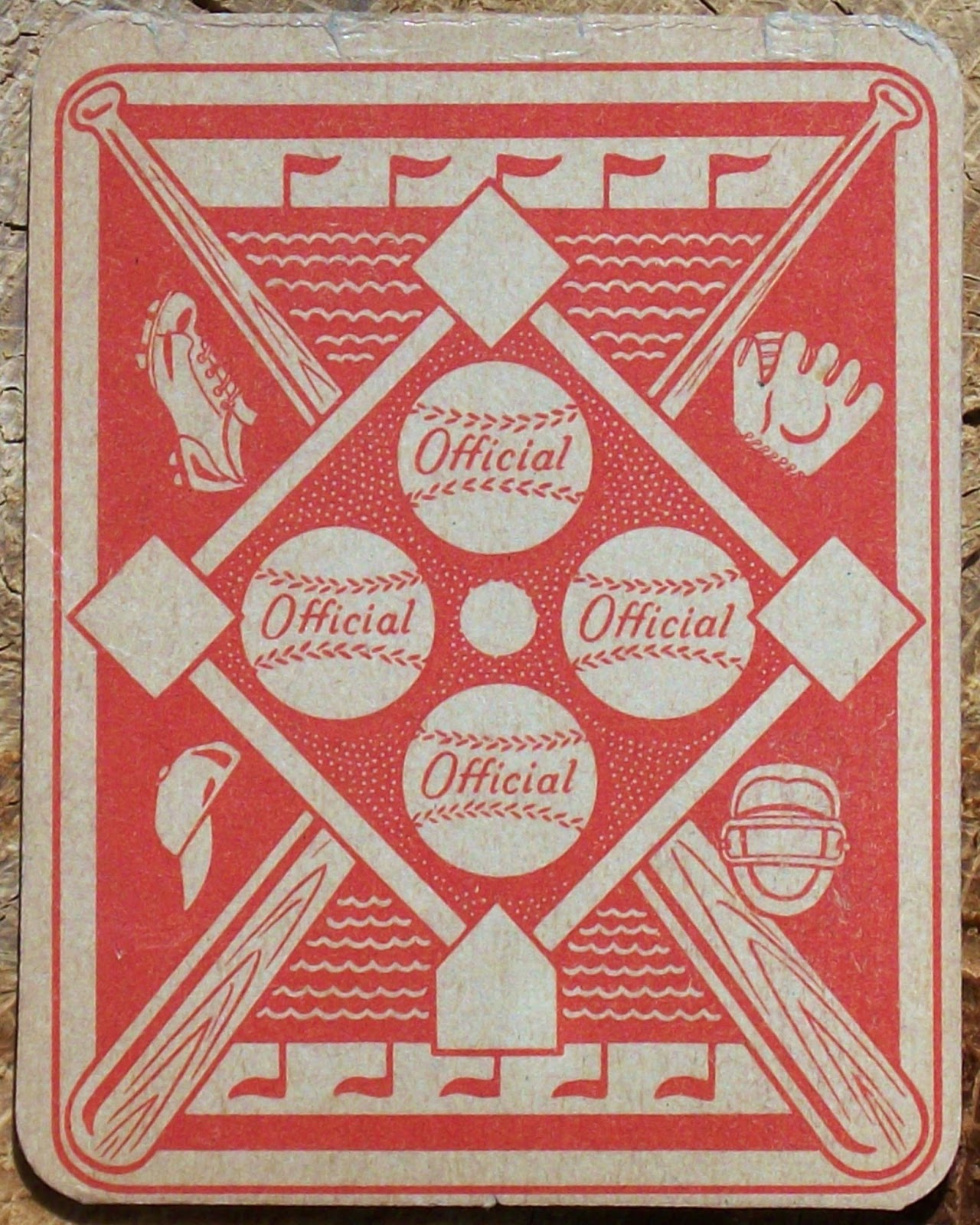 Fred Sanford was born on 8/9/1919 in Garfield, UT.  Sanford began playing for the St. Louis Browns in 1943, where he remained throughout the majority of his major league career.  He missed the '44 and '45 seasons to serve in the military during WWII, but was back with the Browns in '46.  After leading the league in losses in '48, Sanford was traded to the Yankees in 1949.  He was awarded a World Series ring in '49 and '50 during the beginning of the Yankees stretch of 5 consecutive championships.  Sanford was traded to the Washington Senators during the '51 season, and then back to the Browns the same year where Sanford finished out his major league playing career by the end of the season.  Fred Sanford passed away on 3/15/2011 in Salt Lake City, UT at the age of 91. 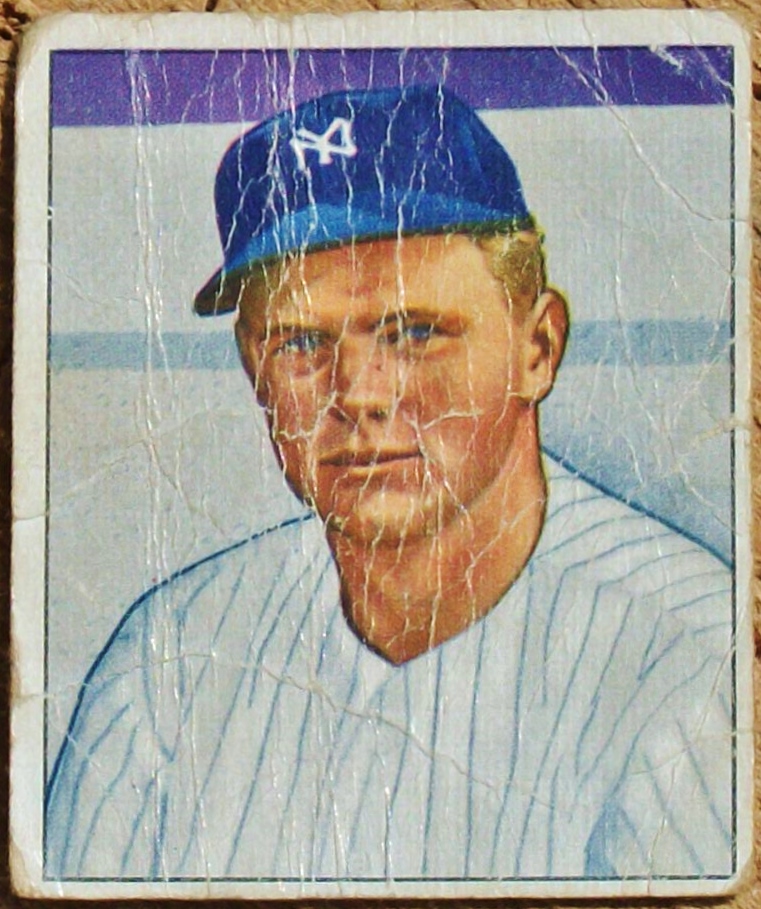 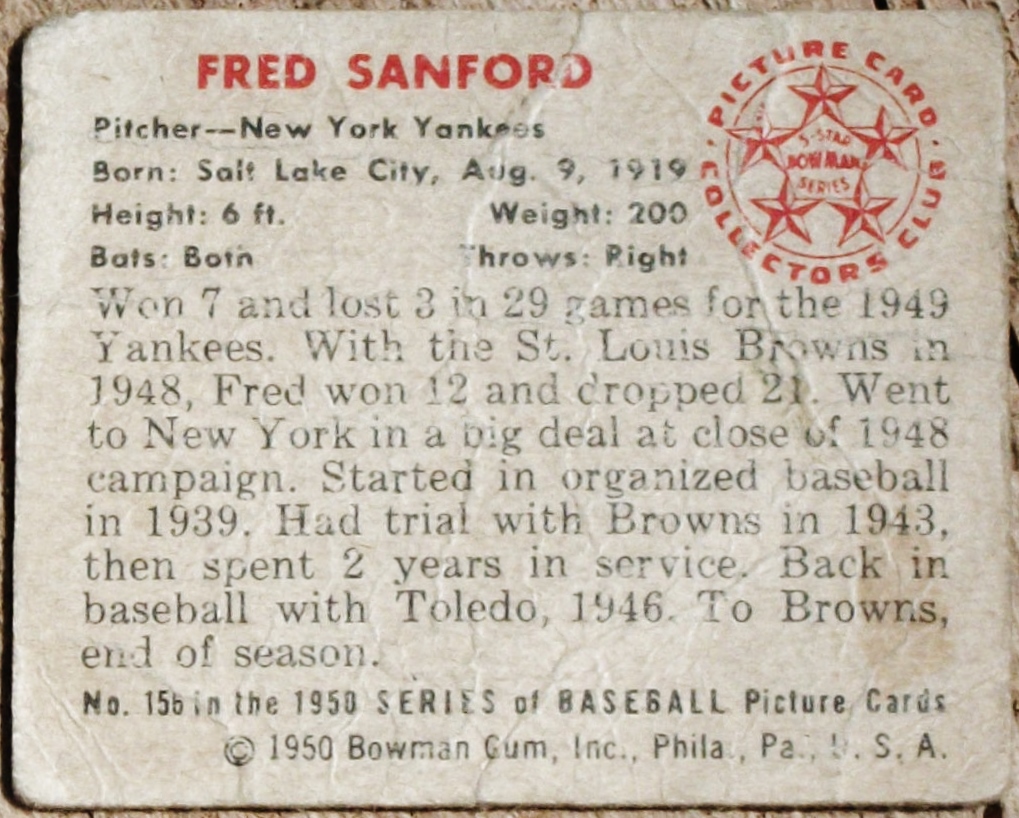 BV: $15 (for commons)
Cost: $2.99 (paid 20% BV)
Condition: PR 1.0 (worth 5% BV)
Completion: 12 of 252 (4% complete)
Comment:  Despite severe creasing, this is still a complete, readable, and very collectible card for me in poor condition.  There is no extraneous writing and nothing's missing that shouldn't be, which I think is most important for low grade card collecting.  As a side note, I did notice an early-50's Topps card (1953, I think) for sell online that had "obviously" been trimmed (which was unstated in the description) and was listed in poor condition with no further details except to look at the picture (only front shown).  I almost sent an e-mail to the seller stating that the alteration must be listed alongside its condition.  Although I said this card was "obviously" trimmed, an untrained eye may not have caught it before placing a bid.  The card looked much better than "poor" at first glance (which made me take a closer look at it), but if I had purchased the card and later determined that it was actually trimmed, the seller would have received no better than neutral feedback (which I have never done to a seller).  The moral of the story is: a beat-up card in poor condition is an obvious, but a good-looking trimmed card can be deceiving to buyers.  The "buyer beware" approach to selling cards is not acceptable.  Tricking people always deserves less than positive feedback.
Posted by RoundtheDiamond87 at 12:41 PM No comments: 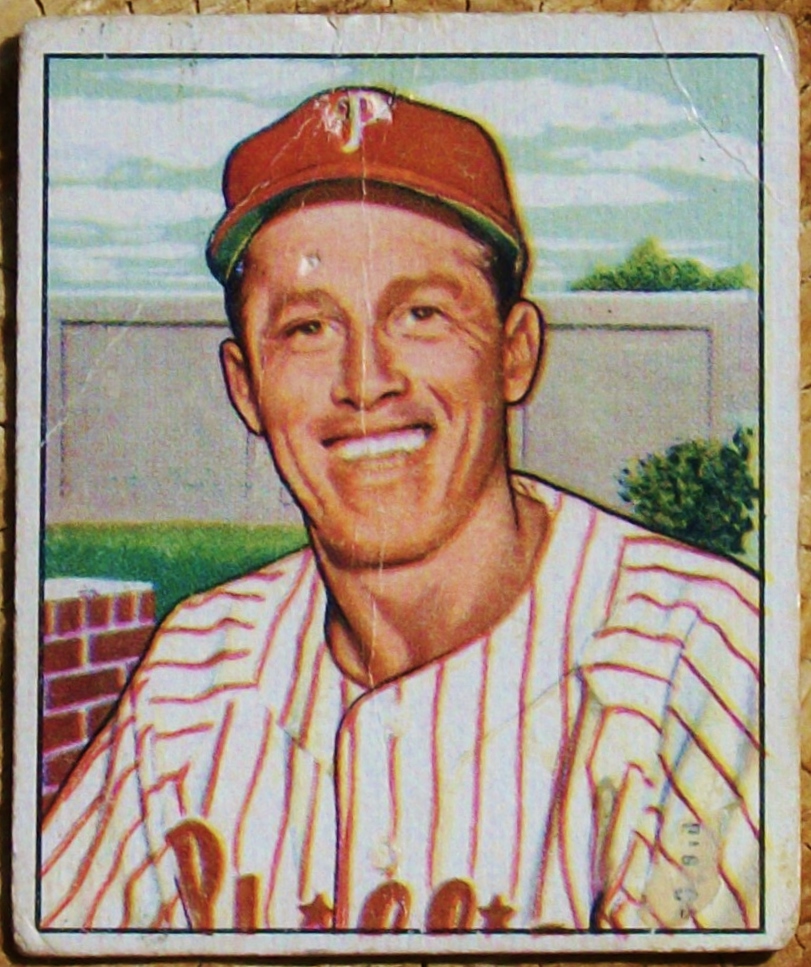 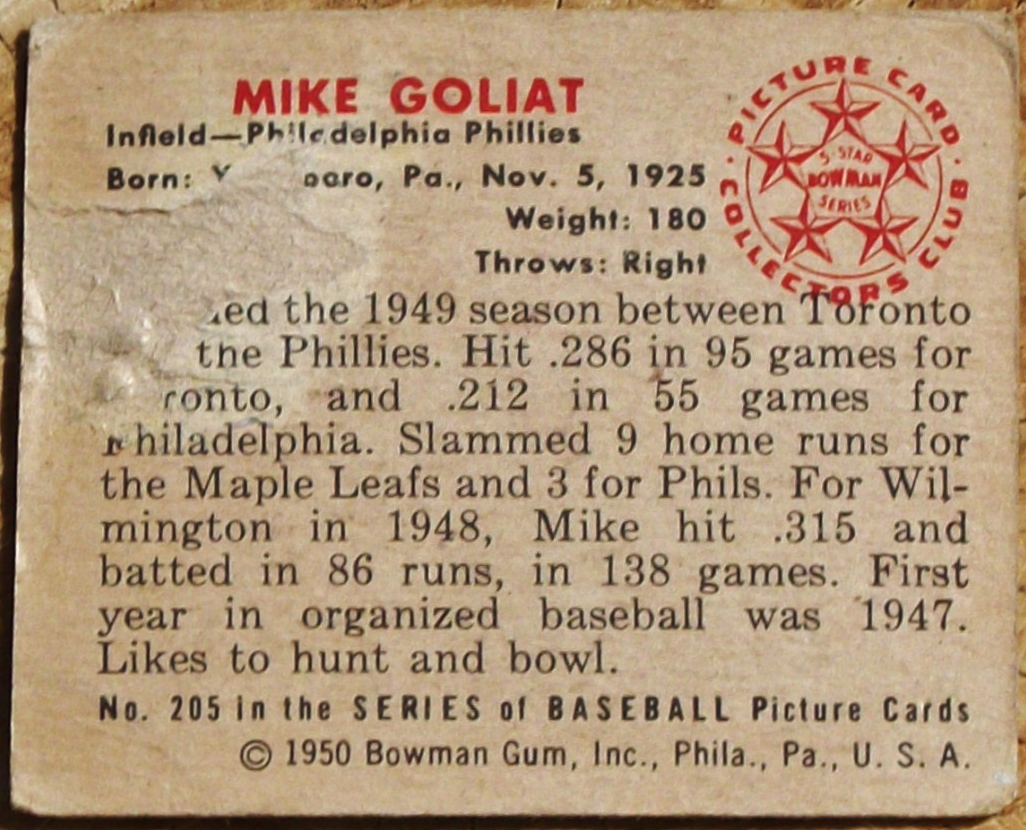 BV: $15 (for commons)
Cost: $1.95 (paid 13% BV)
Condition: PR 1.0 (worth 5% BV)
Completion: 11 of 252 (4% complete)
Comment:  Although I've listed this as a Poor condition card, it must also be noted that the card back has paper loss resulting in an inability to read the entire description.  The bullet hole looking dent on the player's forehead and the vertical crease down the center would still be acceptable flaws to me otherwise, which I would have probably still given a Good rating if not for the paper loss.  This card came as part of a larger lot, which is the only reason that it's included in my collection of '50 Bowmans as I don't typically purchase cards in this shape.  If listed for sale online, the identification of paper loss must be indicated in addition to its grade due to the severity of the damage.  A typical Poor condition card can get by with just the grade, but this is a special type of Poor card that falls into a similar category with trimmed and marked cards.
Posted by RoundtheDiamond87 at 8:02 PM No comments: